Iowa State graduating senior styles her own future in fashion 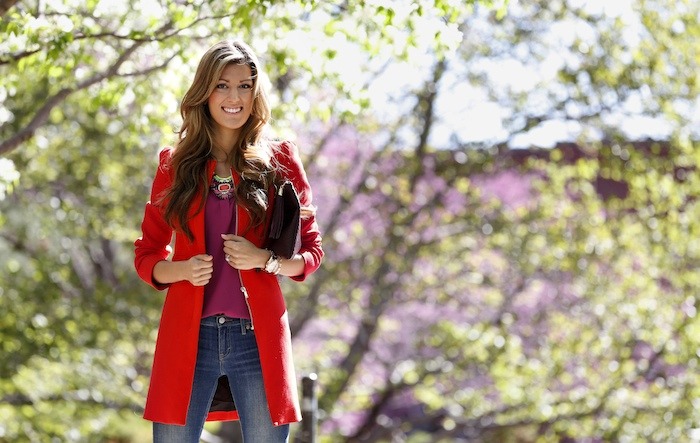 Brenna Lyden graduates from Iowa State with a degree in apparel, merchandising and design, a thriving fashion blog and styling business, and  a signed contract for a coveted job as a buyer for Nordstrom Inc. Photo by Christopher Gannon (Larger image).

AMES, Iowa -- When Brenna Lyden, Burnsville, Minnesota, was 15, she walked into a pre-teen fashion store at the mall and told the managers to hire her because she'd be the top seller within a month. They did and she was. ("Within two days, actually.")

When Brenna Lyden was 18 and a freshman at Iowa State University, she created a fashion blog to gain a competitive edge for herself in the apparel industry. It worked and she gained an edge. ("More than 40,000 followers in 196 countries.")

When Brenna Lyden was barely 21 and about to start her senior year, she had a signed contract for a coveted job as a Nordstrom Inc. buyer tucked safely in the back pocket of her skinny jeans. ("I love proving people wrong when they tell me I can't do something.")

So when Lyden accessorizes her cap and gown with “sky-high heels and lots of jewelry,” everything is just as it should be.

She graduates with a degree in apparel, merchandising and design, and minors in journalism and entrepreneurship; her 150 pairs of shoes are packed away in the U-Haul parked outside Hilton Coliseum; the fabulous job and perfect apartment await her in Seattle; and her blog followers look forward to her "Great Gatsby" themed wedding and European honeymoon.

“Iowa State has opened a lot of doors for me, and I took advantage of them,” she said. “There have been a lot of connections made and a lot of amazing people here who helped me get to where I was supposed to be.”

The princess and the powerhouse

Lyden went through childhood in “full-on princess” mode. If she absolutely must go to the grocery store with her mom, let it be in a prom dress. By the time her parents battled through a divorce fueled by alcohol and abuse, she was wrapped securely in layers of chic.

“Style gave me a say, a voice. If I could layer an outfit that said who I was that day, that made me feel better,” Lyden said.

Add a dash of her grandmother’s “major jewelry collection,” a hint of her mother’s Mary Kay pink Cadillac and a heaping spoonful of refusal to take ‘no’ as the answer, and you have the roiling base for a future fashion powerhouse. (The sky-high heels come later.)

Although she questioned her high school adviser’s recommendation that ISU really was a top ranked school for fashion (“cornfields and Chanel don’t go hand in hand.”), Lyden and her mom zipped down I-35 for a visit. Whether it was the picture-perfect campus or the prospect of working on ISU’s Trend Magazine is hard to say, but she applied for and accepted admission to Iowa State that weekend.

Sometime during her freshman year, Lyden attended a lecture in the Great Hall presented by an apparel industry professional.

“The speaker described how the industry is so competitive that you’re essentially destined to be unemployed unless you set yourself apart,” she said. “I walked back to my dorm room wondering what I could do to be special.”

Her answer was a blog. At first, Lyden didn’t tell anyone about it, now describing its humble beginnings as “not impressive.” Over the summer, she spruced up her “Chic Street Style” fashion diaries with the addition of a high-end digital camera and some self study on natural lighting. She introduced herself to followers as “a Midwest ma’am specializing in generating dynamic cheap-chic looks. A layering guru, self-confessed shoe hoarder and high-low fashion mixologist.”

During sophomore year, Lyden took “Fashion and Beauty Writing” from Deb Gibson, Meredith Professional in Residence in the Greenlee School of Journalism and Communication. She credits Gibson for “changing everything.”

“I owe my success to her. I learned so much from her that has helped me be credible as a blogger. And she taught me how to be a better interviewer, which helped in job interviews, too,” Lyden said.  “Deb has a personal approach and a great vibe about her that is contagious. When you’re around someone who is as interested and encouraging as she is, that’s what you learn.”

Meanwhile, Lyden worked her way up the ranks of Trend Magazine, Iowa State’s student-run publication on fashion, beauty and lifestyle (“Who doesn’t want to be Carrie Bradshaw, right?”). From photo shoot stylist to fashion director to co-editor-in-chief.

Through her blog, she added an online styling service created for “everyday people, like so many I know who lack confidence simply because of clothes,” Starting with a questionnaire she designed, Lyden conducts Skype appointments with clients, uploads photos of their clothes, mixes and matches with some personal online shopping suggestions and generates a customized look book for each client.

“I try to fuse together a level of actual wear ability and fashion-forward style. I want a mom of six to feel like she can wear my outfits. I like helping the everyday woman with fashion,” she said.

Lyden has several regular clients from Canada to Australia. As her blog and styling business flourished, she took on two ISU student interns.

“I’m not your average college student. On Friday nights, they might go out drinking. I stay in and type up my blog post and style looks for clients. That’s what fulfills me most,” she said.

“I love blogging, photography, social media, the business side and the interactions with people in places like Dubai. I have followers who are 70 and 17,” she said. “When you do what you love all day, it’s not work.”

Chic Street Style really took off when one of Lyden’s blog posts went viral on Pinterest. Preparing for her fall-semester study abroad junior year in Italy, Lyden searched for ideas on packing. Finding countless posts about packing, she found nothing on “how you put it all together.”

While studying  "History of Italian Fashion," "Fashion Consumer Behavior" and "Visual Merchandising" in Florence, Lyden created a daily log. She pictured each of the 82 outfits she combined from the contents of two suitcases of carefully chosen skirts, pants, blouses, shorts, dresses, sweaters, belts, scarves, bracelets, necklaces, purses and (of course) shoes. (See for yourself.)

Her “Fashionista’s Ultimate Packing Guide” put Chic Street Style on the blogosphere map. Lyden has since secured affiliate sponsorships with Nordstrom, Gap, Target, H&M, Piperlime, Stella & Dot to name a few. She not only gets a percentage from the purchases made by followers, she also gets free products — but accepts only those she "would be willing to pay for on a college student’s budget."

Despite the odds, Lyden scored a summer internship at Nordstrom's corporate headquarters and flagship store in Seattle. She had been chosen for one of 40 internships from 8,000 applicants.

"You just really have to be better than everyone and approach it with the relentless attitude that no one can stop you," she said. "Why can't it be you?"

It's an attitude that her Nordstrom manager referred to "as tenaciously determined." Of the many career facets in fashion, Lyden knew she wanted to be a buyer. But she knew starting her career at Nordstrom was a long shot.

"The word ‘no’ scares a lot of people, but that’s like my power word. I thrive on it because it makes me want to do something even more. That’s why I think I can do well in this industry," she said.

What she learned during her Nordstrom internship could fill a textbook. "No classroom experience could ever prepare you for buying. It's very learned on the job because every retailer does it differently."

And Lyden realized she might need to "adjust her personality and talk less and listen more" in order to soak up all she could learn.

When Nordstrom offered her the job contract last August, Lyden knew how lucky she was. And when they cautioned her about being both a blogger and buyer, she vowed to do both even better.

When Brenna Lyden accessorizes her cap and gown with “sky-high heels and lots of jewelry” to cross the commencement stage, everything is just as it should be. She's graduating with a degree in apparel, merchandising and design with minors in journalism and entrepreneurship. Her fashion blog and styling business are thriving. Her U-Haul is packed. And a signed contract for a coveted job as a buyer for Nordstrom Inc. is tucked safely in the back pocket of her skinny jeans.

“Iowa State has opened a lot of doors for me, and I took advantage of them. There have been a lot of connections made and a lot of amazing people here who helped me get to where I was supposed to be.” 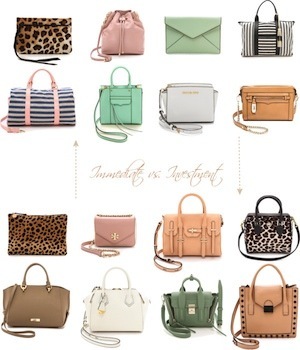 "Spruce up for Spring" 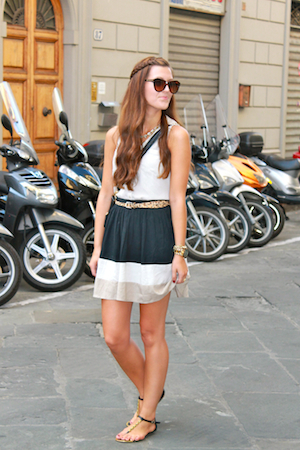 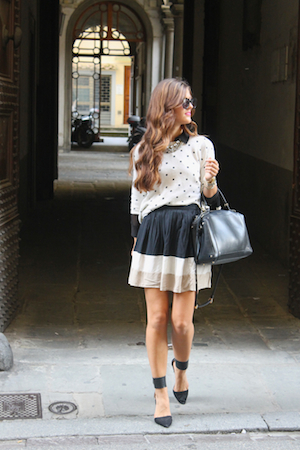 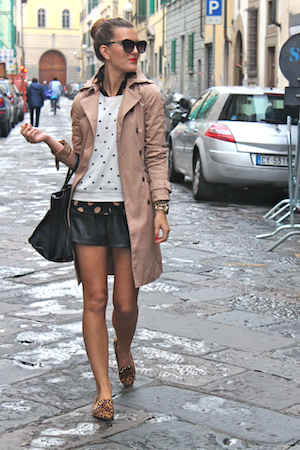 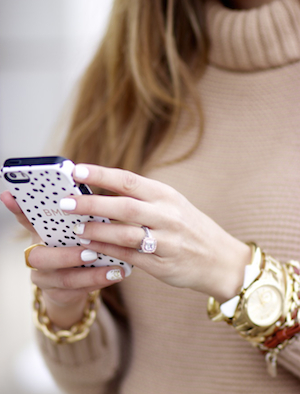