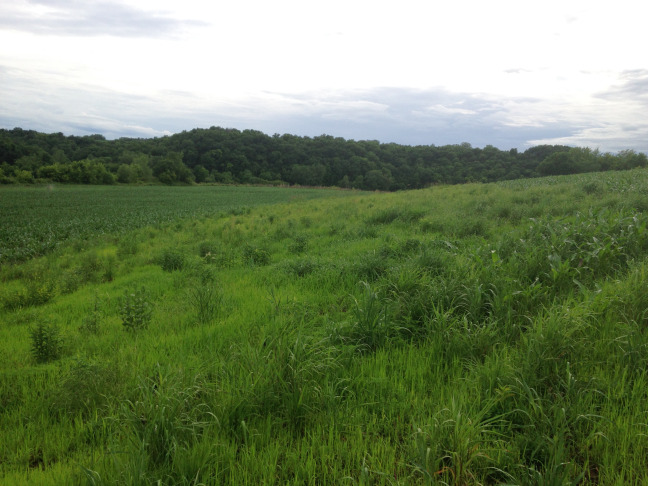 Narrow strips of native prairie planted on cropland, like the one shown above, can yield immense environmental benefits. The STRIPS program at Iowa State recently received a USDA grant to expand its work. Photo courtesy of Lisa Schulte Moore. Larger image.

The three-year, $500,000 grant from the U.S. Department of Agriculture’s National Institute of Food and Agriculture will allow the ISU STRIPS program to widen its scope and test its methods in new geographic areas and agricultural practices.

STRIPS, which stands for Science-based Trials of Rowcrops Integrated with Prairie Strips, began in the fall of 2003 at a single site at the Neal Smith Wildlife Refuge near Prairie City. Today, STRIPS personnel have helped 18 farmers across Iowa and northern Missouri install native prairie on their fields, unlocking a range of conservation benefits such as cleaner water, healthier soil and new wildlife habitat.

The new grant will provide the resources to continue the project’s impressive trajectory, said Lisa Schulte Moore, an associate professor of natural resource ecology and management and a founding member of the STRIPS project.

“It’s wonderful that farmers and government agencies want to use the knowledge we’re producing,” Schulte Moore said. “The project has taken off beyond our wildest dreams.”

STRIPS personnel help landowners and farmers utilize native plants grown in narrow strips to realize a range of environmental benefits in their fields. Schulte Moore said the diverse mix of plants includes grasses and wildflowers that produce deep root systems and stiff stems, which reduces erosion and runoff by slowing water and holding soil in place.

Plants like bluestems and black-eyed susans commonly form part of the seed mix, and some of the strips utilize milkweed varieties to provide habitat for monarch butterflies, which have become increasingly scarce in recent years.

“Prairie was here historically before the landscape was so dominated by corn and soybeans,” Schulte Moore said. “We’re trying to harness Iowa’s native ecosystem. It makes sense that this mix of plants would be a good fit because prairie is adapted to Iowa.”

The prairie strips require some maintenance from the farmers participating in the program. Schulte Moore said mowing the strips as the native plants establish keeps weeds from upending the ideal balance of plant life. The frequency of mowing during and after establishment depends on the specific circumstances of individual fields, usually only once or twice, she said.

When water washes across a field, the stiff stems and deep roots of prairie plants slow the runoff enough that much of the sediment in the water settles back in the fields, said Matt Helmers, a professor of agricultural and biosystems engineering and one of the leaders of the STRIPS program.

How much of the sediment load stays in the fields? Helmers said monitoring done at the Neal Smith site showed a 95 percent reduction in sediment losses. That means cleaner water downstream and healthier soil in the field.

Fields that feature drainage tiles can “short-circuit” the belowground water quality benefits of prairie strips by carrying water under the buffer zones, he said. In such cases, there is increasing interest in the potential of using prairie strips in concert with “saturated buffers,” or lateral lines that intersect with tile lines before they release water into a stream. The potential combination of strips and saturated buffers could provide surface and subsurface water quality benefits, even in fields with drainage tiles, Helmers said.

But getting the best results hinges on site-specific design and placement of the prairie strips. For instance, Schulte Moore said the strips are commonly around 30 feet in width, but that can change depending on the specifics of a field. The STRIPS team also takes into account logistical concerns such as limiting interference between prairie strips and the machinery that a farmer will use in the field.

“You want to look at where the water is flowing and get the strips placed accordingly,” Helmers said. “We look at the topography of the land and place the strips in areas where they can intercept the surface water runoff.”

Tim Youngquist, an agricultural specialist in the ISU Department of Agronomy, works directly with farmers and landowners interested in adopting prairie strips in their fields. Youngquist grew up on a fifth-generation farm in northwest Iowa, an upbringing that helps him understand the perspective of farmers.

“The project needed someone who was going to speak the farmer’s language on the ground,” he said. “My role is to walk them through the logistics.”

He said STRIPS personnel learn as much from the farmers as vice versa. The farmers and landowners eager to try prairie strips in their fields tend to be early adopters with an “entrepreneurial spirit,” Youngquist said.

“The responses we’ve gotten have been overwhelmingly positive, even though prairie requires a little different mindset than corn and soybeans,” he said.

A new USDA grant will allow the innovative STRIPS program at Iowa State University to widen its scope and test its methods in new geographic areas and agricultural practices.

“It’s wonderful that farmers and government agencies want to use the knowledge we’re producing. The project has taken off beyond our wildest dreams.”