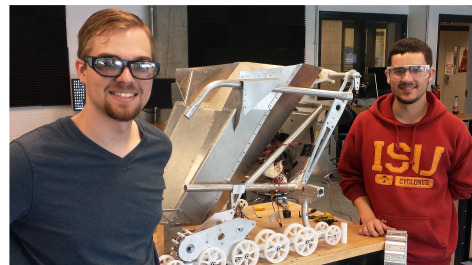 Phillip Molnar, left, Tyler Broich, right, and the rest of the Cyclone Space Mining team are busy assembling their robot for NASA's May 18-22 competition at the Kennedy Space Center. Larger photo. Photo by Mike Krapfl.

5-27-15 update: This year’s NASA Robotic Mining Competition was a struggle for Cyclone Space Mining. In the team’s first run in the mining arena, the left linear actuator wouldn’t lift the robot’s hopper. That made it impossible to collect any simulated Martian soil. In the second run, the linear actuator worked and started lifting the hopper, but then the robot shut down. Again, the robot wasn’t able to do any mining. The bugs and breakdowns were frustrating because team members still believe in their robot, said Phillip Molnar, a junior from Ankeny who’s studying mechanical engineering and is the team’s project director. But, the student-engineers didn’t give themselves enough time for testing and perfecting. “We didn’t quite get to prove what we have,” Molnar said. Even so, the team members did bring home three awards for their outreach and engagement efforts.

AMES, Iowa – Early in the week, the mining robot of Cyclone Space Mining was mostly a pile of parts in the team’s campus workshop. And that pile was still too small.

So team members were working at a bank of nearby computers, designing more parts for their mining machine. And Tyler Broich, the team’s vice president, was getting ready to order a few more blocks of aluminum that could be turned into all those new parts.

These are all-out days and nights for the 15 members of Iowa State’s space mining team leaving for Florida this weekend. They’ll be one of 49 teams competing May 18-22 at the NASA Robotic Mining Competition at the Kennedy Space Center.

But the team wasn’t in panic mode as it raced to finish its robot.

“The pressure is definitely on,” said Broich, a junior from Ankeny who’s studying mechanical engineering. “But we’re going to do well and we’re going to keep up our tradition of doing very, very well.”

Cyclone Space Mining has a record of success and innovation at the past three NASA contests featuring student-designed and student-built mining robots. The robots need to run over rocky terrain, scoop up loads of gritty soil, haul the soil back over the rocks, dump it into a collection bin and then go out for another mining run.

Last year, Iowa State’s robot successfully mined a load of simulated Martian soil under its own control, instead of being remotely controlled by team members. It was the first fully autonomous run in the contest’s five-year history. It was also a huge haul of 500 autonomy points and the contest’s first-ever autonomy award.

Two years ago, the team won the grand prize, the Joe Kosmo Award for Excellence, after earning more mining points than any other team. And three years ago, the team returned to campus with first-place awards in mining, outreach and efficient use of communication power.

Now, the team’s student-engineers are working to get even more autonomous operation out of their robot.

To do that, the students are adding some complexity to their robot.

Last year’s robot ran blind – it would run until bump sensors hit a wall and triggered a change in direction. The new system will use a radio frequency identification tag, two lasers and two wall-mounted targets to triangulate and calculate the robot’s location in the mining arena. That has to happen in real-time. And it has to be precise – getting near the collection bin after a mining run won’t do the team any good.

To make the simulated Mars mining runs even more challenging, NASA has added some variability to this year’s competition:

NASA says it might be able to learn something from the students’ responses to all those challenges.

“The technology concepts developed by the university teams for this competition conceivably could be used to robotically mine regolith resources on Mars,” the agency wrote in a contest description. “NASA will directly benefit from the competition by encouraging the development of innovative robotic excavation concepts from universities which may result in clever ideas and solutions which could be applied to an actual excavation device or payload.”

The Iowa State students think they’ve come up with some clever ideas and solutions. And after a few days of testing and retesting, Molnar said, “I think we’ll do pretty well.” 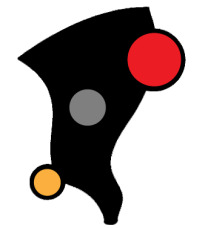 These are all-out days and nights for the student-engineers of Cyclone Space Mining. They're preparing for NASA's May 18-22 contest for student-designed and student-built mining robots. They've had a good run at the Kennedy Space Center the past three years and are looking to continue that success and innovation.