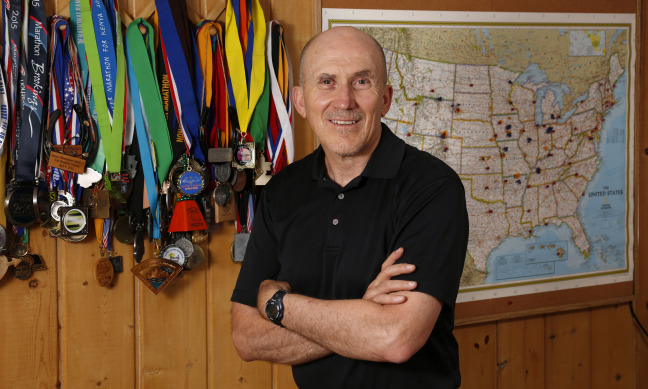 Medals from Dave Swenson's 200 races hang next to a map marking the location of each race. Photos by Christopher Gannon (Larger image)

AMES, Iowa – Finishing a marathon is a goal that once accomplished is enough for most runners. Others see it as just the beginning. Dave Swenson is one of the others.

Swenson, an associate scientist of economics at Iowa State University, ran his first marathon in 1999, and it was such a painful experience that he thought he’d never run another after crossing the finish line. But this spring, Swenson completed his 200th race that was 26.2 miles or farther in distance.

Why 200? There’s no real reason why, but more of a natural progression that evolved from a T-shirt for a 50-states marathon club that Swenson spotted while running his third marathon in Lincoln, Nebraska. The thought of running a marathon in all 50 states was both crazy and intriguing to Swenson, who at the time was still trying to figure out how to run without “finishing ugly” – his way of describing the pain he felt after each race.

“My first thought was, well, gee that’s dumb. Why would you want to do that? But on the way home I thought, I could do that and right then and there I decided to run a race in every state. That was in 2000, and I was 45 years old and I thought I could do that by age 50 – it would be easy,” Swenson said.

It wasn’t always easy, but he did it – sometimes running more than 50 miles in a single weekend to maximize his travel budget and cross off two states in one trip. Logging the 1,300-plus miles required to finish this cross-country challenge also gave him plenty of practice to figure out his form and his limits, so that once he hit 50 he was ready for more.

The determination required to train and run that many miles is just part of Swenson’s DNA – he’s a guy who does not back down from a challenge, whether running or at work. In his 23 years at Iowa State, Swenson has published reports on everything from the value of Iowa’s manufacturing and agricultural sectors to the cost and return on financial incentives and tax breaks provided to businesses.

His reputation has made him a go-to for analysis. Public officials ask for his help to understand changes or deal with the consequences of economic growth or decline. Swenson’s often asked to comment on current issues or when a business or industry is hit with a crisis, such as avian influenza. His work does not always make him popular, particularly when it’s at odds with political or business leaders. But for Swenson, that just means he’s doing his job.

“If there are inappropriate conclusions or narratives driving policy development, we have an obligation to confront those narratives,” Swenson said, listing several examples of false conclusions he’s tackled, such as job projections for the biofuels industry. “In all of those cases, research-based findings influenced local and state policy development.”

With the hours Swenson spends at the computer analyzing data, running is a good distraction. At 60, he is still running around 10 marathons a year. Along the way, he adds an occasional 5K or 10K race to the mix and spends summers competing in triathlons. Combined, he easily racks up 1,600 to 1,800 miles over the course of 12 months. Call him crazy or an overachiever, for Swenson this is just his normal.

“People will say that’s crazy or insane, but I tell them, ‘Don’t compare your insides to my outsides,’ because I had to work really, really hard to be able to do this,” Swenson said. “My normal is OK for me. I’m not crazy. There are people who run a marathon every weekend; I’m not one of those people. It’s not an obsession, it’s just a habit.”

Breaking one habit, starting another

Running is a much healthier habit than the one Swenson kicked before ever lacing up his shoes. If it wasn’t for the weight he gained after he quit smoking, Swenson may never have become a runner. To get fit, Swenson started running with his daughter, who was 16 at the time and getting in shape for a summer hiking trip. The pair ran two miles every morning. After a few weeks of training, his daughter left for her trip and Swenson kept running.

“I was afraid to stop, because I was afraid if I stopped just once, I wouldn’t start again,” he said.

And so he went on a streak, running every day for two years – shedding the extra pounds he’d gained after he quit smoking and building up his distance to four or five miles. He never gave much thought to upping his mileage until Jerry Knox, a now retired Iowa State professor, encouraged him to run Dam to Dam, a 20K or 12.4 miles.

Swenson remembers Knox telling him, “If you run slow enough, you’ll finish.” Knox was right; Swenson finished and still adheres to that advice. He’s had to slow down to the point of walking in some races. While running across the Grand Canyon, Swenson got so dehydrated he had to lie down in a creek, but he finished.

The one Iron Man he completed was the most brutal. He cramped up so severely he had to walk the entire marathon portion of the race.

“I had to walk all bent over like an old man, but I made it.”

Nothing’s going to break his stride

Spasms, cramping and dehydration may occasionally slow him down, but Swenson takes it all in stride. He intends to keep going as long as he can run without pain. And when that happens, he says he’ll walk. But for a man who runs with a knee brace to compensate for the fact he has no medial meniscus, and whose left clavicle is reconstructed with a titanium rod and eight screws, it’s unlikely he’ll ever stop.

Swenson picked up the metal – instead of a medal – competing last July in the Okoboji Triathlon. He was on his bike and hit the brakes to make a left turn. Swenson believes he hit some sand on the road, which caused his bike to skid and collide with a tree. The crash shattered his collarbone, broke his shoulder, four ribs and collapsed a lung.

It delayed, but did not keep, Swenson from reaching his goal of 200 races. Three months after the accident, he ran an ultramarathon in October, then a marathon in November and another ultra in December. He plans to go back to Okoboji this July to finish what he started.

Swenson doesn’t share the stories for sympathy. Judging from the smile on his face as he recalls each race, it’s more of a sense of pride in what he’s overcome to cross the finish line. He’s had to adapt his running style over the years – now often walking for a minute every mile – but he’ll do whatever it takes to keep moving forward. Because more important than any number he may reach, it’s the experience.

“I’ve run marathons in every state. I’ve run in lots of quirky, crazy places. I’ve run ultramarathons in a place called Hell, Michigan,” Swenson said. “It’s not just running the race; I get to visit interesting places and meet fantastic people. It’s fun being part of a group that does this kind of thing.”

Dave Swenson, an associate scientist of economics at Iowa State University, ran his first marathon in 1999. It was such a painful experience that he thought he’d never run another after crossing the finish line, but this spring, Swenson completed his 200th race that was 26.2 miles or farther in distance.

“People will say that’s crazy or insane, but I tell them, ‘Don’t compare your insides to my outsides,’ because I had to work really, really hard to be able to do this. My normal is OK for me. I’m not crazy. There are people who run a marathon every weekend; I’m not one of those people. It’s not an obsession, it’s just a habit.” 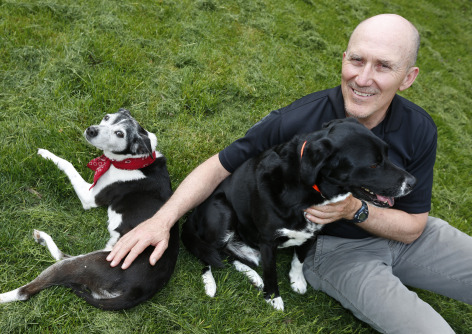