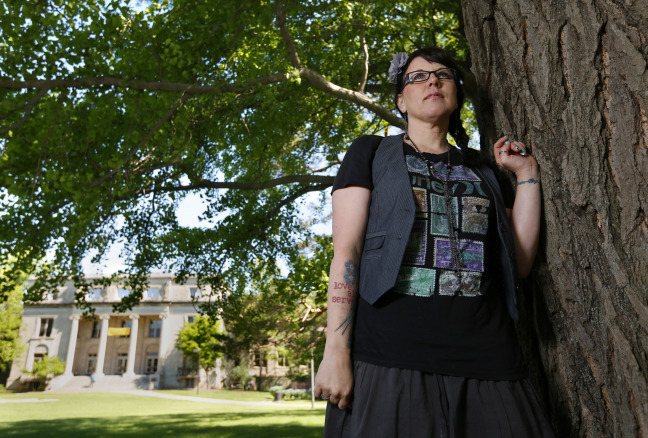 Amy Popillion wants her students to see the positive that can come from poor choices and bad situations in life. Photo by Christopher Gannon

AMES, Iowa – The future Amy Popillion envisioned as a kid growing up in small town Iowa could not be more different than the life she is living today.

The senior lecturer of human development and family studies at Iowa State University never could have imagined pursuing a career in academia. Her aspirations as a child did not reflect an expectation to go to college, so she saw herself graduating from high school and working as a waitress or secretary. College just wasn’t part of the equation.

It’s not that Popillion lacked confidence in what she could achieve, but an environment of abuse and alcoholism severely limited her view. Popillion credits a handful of people – including a favorite high school teacher – for helping her see that her vision of the future did not need to become her reality.

Today, Popillion strives to be that same positive influence for her students – a way to pay it forward. It’s a personal and professional philosophy that is a testament to the challenges she has overcome as well as a tribute to those who have made a difference in her life.

The path to teaching at Iowa State started with Popillion’s decision to transfer here as an undergrad. A first-generation student, she still remembers the feeling of moving from a community of 500 to a campus with then – 25,000 students. It was overwhelming, but exciting to shed the skin of her small town.

“For me, coming to college from a small town really gave me a chance to start over,” Popillion said. “I had a desire to do something different; I just struggled a little bit to get there.”

Popillion thrived in her new environment. When it came time to graduate, she applied to graduate school and never left ISU. She found a natural fit in the field of human development and family studies, earning her master’s and Ph.D. Her classes taught her about family dynamics and challenges and a lot about herself.

“My classes always felt very personal, because I could see myself in those classes,” she said.

In that same vein, she encourages students, many who are aspiring teachers, in her children’s literature course to develop teaching methods and tools that will help their future students grow as individuals.

“I always tell my students that books are tools to reach children in a variety of ways. I talk a lot about the importance of children being able to see themselves through the books that teachers share. Part of that requires teachers to have a personal connection to the students in their class,” Popillion said.

Peeling back the layers

Popillion didn’t have a personal connection with a lot of her teachers and she understands why. She did well academically, but had a bad attitude, acted out in class and hung around a group of friends that often found trouble. Popillion says most teachers in middle and high school labeled her as a problem. In fact, she clearly remembers being told, “You will not make it in college with your behavior.” But one teacher was willing to look past the rough exterior.

“Mrs. Bachman upheld that idea of what I see as a teacher’s responsibility to look past the surface and really see the individual needs of a student,” Popillion said. “She was very accessible to students. She was very respectful, but would also joke around with students. She really had her finger on the pulse with what was going on in the lives of her students.”

And for Popillion there was a lot going on in her life that Joyce Bachman, a high school history teacher, didn’t judge. 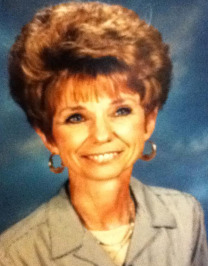 Home didn’t always provide the structure or stability that Popillion needed during her formative years. Growing up she witnessed a lot of violence and experienced physical and psychological abuse. Popillion started smoking and drinking to cope with the ugliness in her life. She found herself in a lot of negative relationships and developed an eating disorder.

It’s part of her life that she shares in class or when speaking to student groups, not as an excuse or for sympathy, but because she wants others to see the positive that can come from poor choices and bad situations in life. Time and therapy has helped Popillion heal, but that wouldn’t have been possible without people, such as her grandmother and Bachman, helping her find direction.

“When you peel back the layers, you find students are dealing with a lot of different issues and yet they’re navigating their way and going to school at the same time,” Popillion said. “I always try to find ways to use my experience to help others. It’s important for me to give back and connect with my students on a personal level.”

Popillion credits Bachman for challenging her, seeing through her “don’t-mess-with-me” attitude and holding Popillion accountable for her actions. Bachman helped Popillion realize college was a path to a better life, while at the same time making it clear that Popillion had to change if she wanted to be successful in college. It was the structure and support that Popillion needed.

“I think there were some people in my life who didn’t know what to do with me. Mrs. Bachman didn’t let me walk all over her, but at the same time she didn’t hold it against me,” Popillion said. “At difficult points in my life, she was someone I could turn to for support, advice and encouragement.”

A chance meeting brings it all full circle

Popillion regrets never having the chance to truly thank Bachman for her guidance. Bachman died in 1998, at 58, from cancer. But Popillion has since found another way to thank her mentor that might not have been possible without a little divine intervention.

Two years ago, Popillion was walking across campus when she stopped outside of Lagomarcino Hall to introduce herself to a prospective student and her mother. It’s something Popillion has always done to make students feel welcome and create a connection, especially if one of those students might one day walk into her class.

On this particular summer day, that prospective student was Claire Denniston. When Denniston mentioned that she was visiting from a town not far from where Popillion grew up, it didn’t take long to piece together that she was Bachman’s granddaughter.

“I think I immediately started crying. I got choked up and teary eyed. I may have even hugged her,” Popillion said, recalling that moment that still stirs emotions and gives her chills.

Through her tears, Popillion expressed her gratitude for the impact Bachman had on her life. It’s a moment that Denniston also remembers well.

After that initial meeting on campus, the two reconnected last fall when Denniston, an education major who plans to follow in her grandmother’s footsteps, took Popillion’s children’s literature class. Outside of class they would meet so Denniston, who was just four years old when her grandmother died, could hear more stories.

“I've always heard that my grandmother was an unselfish and giving woman, but hearing it from family could have been biased. Hearing how she helped Amy solidified my grandmother's persona in my mind. Because I don't have strong memories of my grandmother, it is great to hear positive things about her and strive to become as giving as my grandmother was,” Denniston said.

Getting to know Denniston has brought Popillion’s relationship with Bachman full circle and given her the chance to say thank you in a way she never thought possible.

“Mrs. Bachman gave me so much. Getting to teach her granddaughter and share memories with her is really important to me,” Popillion said. “I just feel it’s a way to honor Mrs. Bachman and honor her memory. Even though she’s not here today to see, I just feel like she knows.”

Amy Popillion knows the impact a teacher can have on a child's life, which is why strives to be a positive influence for her students. Popillion's personal and professional philsophy is a testament to the challenges she has overcome as well as a tribute to those who have made a difference in her life.

“When you peel back the layers, you find students are dealing with a lot of different issues and yet they’re navigating their way and going to school at the same time. I always try to find ways to use my experience to help others. It’s important for me to give back and connect with my students on a personal level.”