Iowa State will begin a five-year agreement with Ames-based VenuWorks Aug. 1. VenuWorks will manage all events, conferences, catering and concessions at the Iowa State Center.

“We want to thank SMG for the service they have provided over the years, and look forward to working with VenuWorks for a seamless transition during the coming months,” said ISU Senior Vice President for Business and Finance Warren Madden.

With the contract ending, ISU sought bids earlier this year, Madden said. A university committee reviewed proposals from both SMG and VenuWorks.

“VenuWorks was selected based on the financial terms, its vision for the future, and expanded opportunities for ISU students,” Madden said.

VenuWorks will assume all food and beverage services for Scheman, Stephens and Fisher, which has been handled by ISU Dining. In the short term, VenuWorks plans to expand internships for hospitality management students and performance opportunities for ISU theater and music ensembles. Long-term, the goal is to renovate and expand the Iowa State Center.

“Those elements will take years of planning and development with the university, but we are confident our team has the experience, expertise and financial strength to realize these goals,” said Steve Peters, president and owner of VenuWorks. “We are thrilled to work with the ISU community to help shape the future of the Iowa State Center.”

The management change does not affect the adjacent Hilton Coliseum, which has been operated by ISU’s Athletics Department since 2008.

Mark North, general manager of the Iowa State Center, will leave his position effective July 31. A new manager will be named within the next 60 days. VenuWorks plans to retain all other Iowa State Center employees.

“The people who make events happen every day are our most valuable resource,” Peters said. “We will be inviting current staff to join our company, with the hope they will want to continue their careers with us.”

Peters founded VenuWorks in 1996. The company operates arenas, stadiums, theaters, amphitheaters, convention centers, museums and galleries in 12 states. Among more than 50 facilities managed by VenuWorks are the TDECU Stadium at the University of Houston, the Ford Center in Evansville, Indiana; the U.S. Cellular Center in Cedar Rapids, the Alerus Center in Grand Forks, North Dakota; the Topeka (Kansas) Performing Arts Center, Adler Theatre in Davenport and Hoyt Sherman Place in Des Moines. 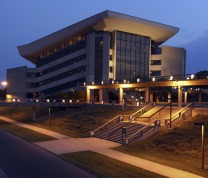