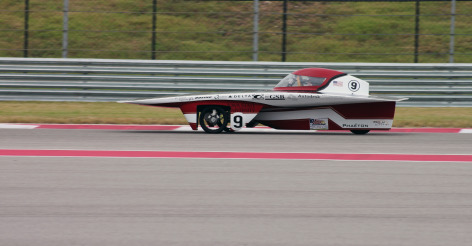 Jeremy Rurup – a sophomore from Titonka who’s studying mechanical engineering and is on Team PrISUm’s mechanical team – expects the car to be just as quick this year. The sun-powered grand prix is July 26-31 at the Circuit of the Americas F1 track in Austin, Texas.

So why is Iowa State’s car so fast around the track?

“Our car’s suspension is better,” Rurup said during a recent tour of Phaëton, the team’s 12th car and the third-place finisher in last year’s eight-day, 1,700-mile American Solar Challenge. “We can take the corners a lot faster, which helps a lot.”

It also helps that the team can tweak an already-proven race car.

“Last year’s race proved out the mechanical system fairly well,” he said. “The suspension and frame functioned as designed. But, because the major electrical board running the car had to be thrown together the day before the race, we found some flaws and issues.”

So, he said there have been improvements to the motor controller and other electrical components. And, just as importantly, he said the team has started to develop a strategy playbook.

Solar car racing doesn’t require a lot of strategy when the roads are flat and the sun is bright. But what do you do when the clouds roll in? Or hills are cutting into your power reserves? How fast do you run? Do you pass a competitor or stay back? How much do you drain from the battery pack? How do you account for drag and rolling resistance? When do you stop to recharge?

Goode said team members are doing the math calculations to answer those kinds of questions. It’s something top teams have already done. He said it’s something Team PrISUm needs to do if it wants to move up in the standings and one day compete in Australia’s World Solar Challenge.

As the team prepares to race this month, it’s also moving ahead with plans for its next car. The new design calls for a car with four wheels instead of the current car’s three. That’s because the team is preparing to move to solar racing’s Cruiser Class, a class that’s closer to the passenger car in your garage than solar racing’s typical low, flat single-seaters.

“Cars in the Cruiser Class look like a real car,” Rurup said. “There’s room for a driver and a passenger. And we think that’s where solar racing will shift to eventually. We’re trying to get ahead of the game.”

The ultimate goal, Goode said, is for Team PrISUm to take its 25 years of solar racing experience “and apply it to make a car your mom and dad will want to buy.”

But the immediate challenge is turning some hot laps at this month’s Formula Sun Grand Prix.

“We’re hoping to get the win this year,” Rurup said. “Phaëton is a great car. We can win if it’s reliable.”

The students of Team PrISUm are preparing their solar racing car for this month's Formula Sun Grand Prix at the Formula 1 track in Austin, Texas. The team is confident its car, Phaëton, can turn some very fast laps.

“We’re hoping to get the win this year. Phaëton is a great car. We can win if it’s reliable.”

Jeremy Rurup, a sophomore from Titonka and a member of Team PrISUm’s mechanical team