Iowa State professor returns from Cuba with a sense of optimism 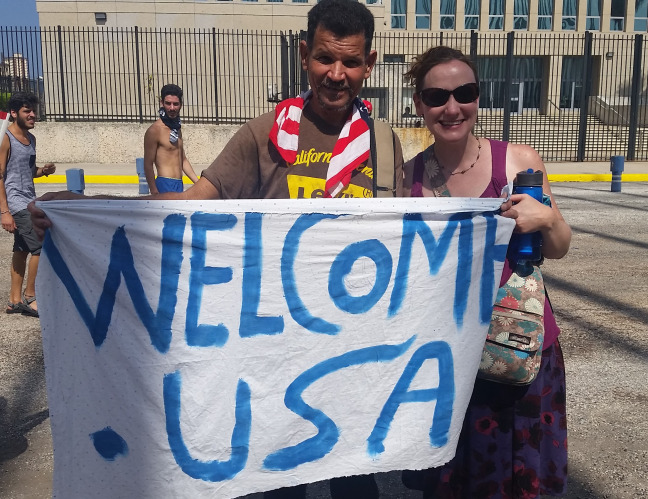 Rose Caraway posed for photos with Cubans celebrating the opening of the U.S. Embassy in Havana. Photos courtesy of Rose Caraway

“It was incredible. It was such a historic moment,” said the assistant professor of religious studies at Iowa State University. 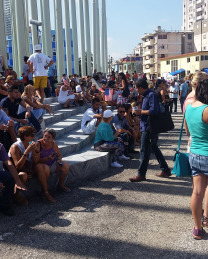 The U.S. Embassy in Cuba opened on July 20 with little pomp and circumstance – the flag-raising ceremony delayed until Secretary of State John Kerry visits in August – but Caraway could sense the optimism among the Cuban people gathered on the embassy steps. It’s a moment she has hoped for ever since she first traveled to Cuba 12 years ago, which is why she extended her trip for an academic conference to be there on that historic day.

“There was just a good feeling. After so many years, people see this as a step forward in terms of peace and moving forward in a positive direction,” said Caraway, who studies religion and society in contemporary Cuba. “It was a very amazing moment.”

At the same time, Caraway recognizes the process will be complex and challenging. However, she is encouraged by the relationships already established between the U.S. and Cuba through business, agriculture, study abroad programs and other efforts. The restoration of diplomatic relations has the potential to improve the quality of life for many Cubans, she said.

“The daily life is difficult and can be frustrating. There is a lack of transportation; wages are about $20 a month, unless you’re working in the tourism industry,” Caraway said. “In spite of those difficulties, I’ve always been impressed with the solidarity among Cuban people, their kindness, their openness and their willingness to work with Americans. They are excited about the possibilities for change.”

Many Cubans have family living in the U.S. Caraway says rebuilding diplomatic relations will hopefully make it easier for Cubans to communicate with and visit loved ones.

Cuba and the U.S. are dealing with many of the same problems, such as climate change, food security and illness, that could unite the two countries, Caraway said. Cuba is not as isolated as some people may think, she added, and there is a lot that Cubans and Americans can learn from one another.

Caraway’s work is focused on the ethical and moral dimensions of food production and how this relates to climate change. She is looking specifically at how Cuba responded to its food crisis following the fall of the Soviet Union. Cubans were forced to grow food in urban gardens and backyards, and find other sustainable alternatives after losing access to resources, such as fertilizers, petroleum and pesticides.

Today, Cuba is an advocate of agro-ecology and permaculture. Through educational campaigns and research centers, the country has promoted the study of ecology in design systems and sustainable agriculture, Caraway said. Permaculture is a holistic and sustainable design system that promotes the intrinsic value of the natural world and the interconnectivity between human and natural ecologies.

Organic agriculture is but one component of this larger vision for human beings and their relationship to the natural world. With mounting concerns about climate change and food security, it’s necessary to consider organic methods of food production and rethink our relationship with the natural environment, Caraway said.

“We’re reaching a critical tipping point with climate change, in which we really don’t have the luxury anymore of putting it off. We really need to come together and mutually tackle some of these major problems,” she said. “Recognizing there are limits on consumption and consuming resources on our planet. That’s where religion and ethics connect with a concern for the environment and food security.”

The decades of disconnect won’t disappear overnight. Caraway says it is important to acknowledge the past, but to move forward and grow in a positive way. Recognizing our difference and understanding that we are all part of a “human community” needs to be part of the process, she said. Such efforts will help break down political barriers and tackle some of those common problems.

Caraway says a good example – albeit unconventional – is the talk show Conan O’Brien taped in Cuba. O’Brien used humor to engage with Cubans at an everyday level.

“That show, I think strangely enough, was a really important event. It was very unassuming. We don’t know what’s going to happen exactly and what it will mean for Cubans when they lift the embargo,” Caraway said. “What was enduring was the leveling effect of the show. He had a set of conversations with everyday people and I think that’s really when change happens at that level.”

It’s the same kind of connection that Caraway has worked to make during her many trips to Cuba. She plans to return in 2016 and look more in-depth at the permaculture and agricultural practices.

Rose Caraway recently returned from Cuba after witnessing the opening of the U.S. Embassy in Havana. It’s a moment the Iowa State University assistant professor of religious studies has hoped for ever since she first traveled to Cuba 12 years ago.

“There was just a good feeling. After so many years, people see this as a step forward in terms of peace and moving forward in a positive direction. It was a very amazing moment.”