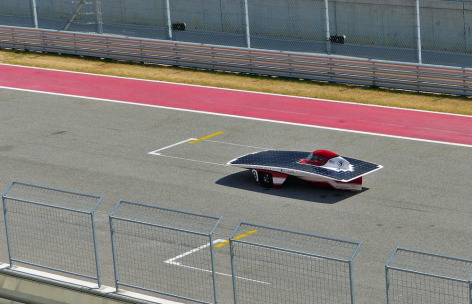 Team PrISUm's Phaëton races down the front straight of the Circuit of the Americas in Austin, Texas. Larger photo. Photo by the Formula Sun Grand Prix.

AMES, Iowa – Only one team managed 70 laps in a day of racing at the 2015 Formula Sun Grand Prix.

And that team – Iowa State’s Team PrISUm – did it each day of the three-day race for solar cars: 76 laps in eight hours on the first day, then 70 laps on day two, then 77 laps. That’s 223 laps over 24 hours of racing around the Circuit of the Americas Formula 1 track in Austin, Texas.

“We did it,” said Matt Goode, a junior from Coggon who’s studying mechanical and materials engineering and is Team PrISUm’s project director. “We broke the fastest lap of the race and we also got the win.”

That win is the first overall victory in Team PrISUm’s 25 years of solar racing.

The team planned to celebrate during an awards ceremony Friday night at the University of Texas at Austin. Then it’s a long drive back to campus, a quick job of unpacking then hustling back to internships, co-ops and jobs.

The keys to victory?

First, Goode said the team decided to use batteries that work better in hot weather, but don’t store as much energy. As it turned out, the racing was triple-digit hot and that sent most teams to the pits with overheating problems. But not Phaëton, the 12th car designed and built by Team PrISUm students.

Now what about that fastest lap?

On Thursday, Goode said going for a fast lap is wasteful and inefficient. But at mid-afternoon Friday, when the win was already clinched, the team blistered the 3.41-mile, 20-turn track in 4 minutes 30.444, about 14 seconds faster than any competitor.

“Never a problem for us,” Goode said. “We designed a great car.”

Team PrISUm raced to its first overall solar car victory at this week's Formula Sun Grand Prix in Austin, Texas. It was a dominating performance: No other competitor was within 30 laps after three days and 24 hours of hot racing.

“We did it. We broke the fastest lap of the race and we also got the win.”