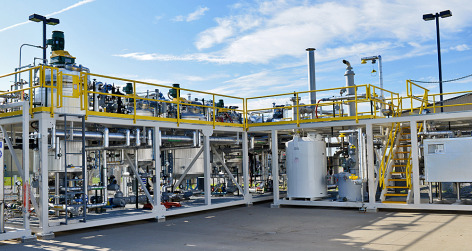 Iowa State engineers will ramp up bio-polymer production with this pilot plant at the BioCentury Research Farm. Larger photo. Photo by Jeni Maiers.

AMES, Iowa – Eric Cochran led the way, counterclockwise, from one 500-gallon industrial tank to another and then another. By the time he got to the 1,300-gallon holding tank at the end he had explained how Iowa State University engineers are producing bio-polymers from soybean oil.

And he was showing how, with support from an industrial partner, they’re about to ramp up bio-polymer production to the pilot-plant scale.

The research and development at that scale is made possible by a new $5. 3 million Bio-Polymer Processing Facility located at Iowa State’s BioCentury Research Farm just west of Ames. The facility was built by Argo Genesis Chemical LLC, a sister company to Seneca Petroleum Co. Inc., of Crestwood, Illinois. The facility was turned over to Iowa State University on July 31.

It will be formally dedicated on Aug. 26. The target date to begin production is Sept. 1.

The huge tanks, the steel frame and all the tubes, pipes, hoses and wires connecting everything are a long way from the round-bottom flasks used by Iowa State’s Cochran and Christopher Williams to develop a process that converts soybean oil into thermoplastics. Those are soft, rubbery polymers that can be melted and re-formed over and over again.

Cochran, an associate professor of chemical and biological engineering, and Williams, the Gerald and Audrey Olson Professor in Civil Engineering and manager of the Institute for Transportation’s Asphalt Materials and Pavements Program, started their project in 2010 in a Sweeney Hall lab. Within a year they were making a few grams of biorenewable polymers from soybean oil, acrylic acid and a chemical process called atom transfer radical polymerization.

Now, after 18 months of designing and building, there’s a facility that uses their technology to make about 1,000 pounds of bio-polymers per day.

“This is new territory for us,” Cochran said. “This actually feels like a chemical plant. We’re working to scale up these processes and turn them into commercial products.”

Williams said taking the process from the lab to the pilot scale is all about “de-risking” the technology for companies that could be interested in producing hundreds of thousands of tons of bio-polymers a year.

Donald Sjogren, the specialty products manager for Seneca Petroleum and assistant to the manager for Argo Genesis Chemical, said the company was the first in the Midwest to add petroleum-based polymers to asphalt in the early 1990s. The idea was to add longevity and resilience to asphalt pavements and create a competitive advantage.

With the hope of eventually replacing the petroleum-based polymers in its asphalt with biorenewable ones, the company supported the laboratory work of Cochran and Williams. As the technology came together, the company licensed it from the Iowa State University Research Foundation and agreed to build a pilot-scale facility.

“We’re always interested in being the first in the industry to bring a biorenewable aspect to our products,” Sjogren said. “We are already working with the university on the next generations of these technologies.”

Once the facility is up and running, Sjogren said he expects high demand for asphalt mixed with the bio-polymers. He said there could be five test projects as early as next summer.

Williams and Cochran said the bio-polymers will also be tested for use in adhesives, coatings and packing materials.

“The goal of all the partners here is to work together to take this technology to expedited commercialization,” Sjogren said.

Williams, Cochran and Sjogren said it took a total company and university effort to make the bio-polymer facility and all its big, shiny production tanks a reality. They said the College of Engineering, the College of Agriculture and Life Sciences, The BioCentury Research Farm, the Center for Crops Utilization Research, the Iowa State University Research Foundation, Environmental Health and Safety and Facilities Planning and Management all had a role in its development. The Iowa Soybean Association and United Soybean Board each invested $125,000 in soybean checkoff funds in initial bio-polymer research at ISU, which has been leveraged to $13 million in private, state and federal funds.

“Looking at the big picture,” Cochran said, “this is how partnerships are supposed to work.”

Iowa State and industry partner Argo Genesis Chemical LLC will dedicate a new, $5.3 million Bio-Polymer Processing Facility on Aug. 26. The plant will allow Iowa State engineers to research and develop their process for producing bio-polymers from soybean oil. It will also "de-risk" the technology for companies that could be interested in producing tons of bio-polymers every year.

“This is new territory for us. This actually feels like a chemical plant. We’re working to scale up these processes and turn them into commercial products.”

Eric Cochran, an associate professor of chemical and biological engineering