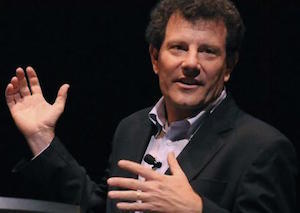 AMES, Iowa — The New York Times Pulitzer Prize-winning columnist Nicholas Kristof has some ideas about how individuals can change the world. He will share them in a talk at Iowa State University Monday, Sept. 14.

Kristof will present "Why We Should Care About the World and Want to Change It" at 8 p.m. in Stephens Auditorium, Iowa State Center. Tickets are not required. Doors open at 7:15 p.m. His talk is free and open to the public. It is part of the university's World Affairs Series: Redefining Global Security.

Kristof considers gender inequity around the world to be the greatest moral challenge of the 21st century — similar to fighting slavery in the 19th century or totalitarianism in the 20th century. Drawing from his best-selling book, "A Path Appears: Transforming Lives, Creating Opportunity," he will explore repression women face, from sexual violence to early marriage to female genital mutilation. He proposes a huge gain for a society that educates girls and ushers those educated women into the labor force. Kristof also will explore areas in which the West has more to do at home to create gender equity, including domestic violence and sex trafficking.

In addition to his twice-weekly op-ed column for The New York Times, Kristof co-authored (with Sheryl WuDunn) two bestselling books that inspired PBS documentaries: "Half the Sky: Turning Oppression Into Opportunity for Women Worldwide" and "A Path Appears." The documentaries are part of the Global Women and Girls Lead Initiative to promote women’s empowerment worldwide. Kristof and WuDunn, a former New York Times reporter who is married to Kristof, work to support local programs for women and children around the globe through their Half the Sky Movement and other partner initiatives.

In 1990, Kristof and WuDunn won a Pulitzer for their coverage of China’s Tiananmen Square democracy movement. Kristof won his second Pulitzer in 2006 for what the judges called “his graphic, deeply reported columns that, at personal risk, focused attention on genocide in Darfur and that gave voice to the voiceless in other parts of the world.”

In 2009, he and WuDunn won the Dayton Literary Peace Prize Lifetime Achievement award. In 2011, the Harvard Kennedy School and The Washington Post named Kristof one of seven "Top American Leaders." He also has received the Anne Frank Award and the Fred Cuny Award for Prevention of Armed Conflict.

A Phi Beta Kappa graduate of Harvard University, Kristof studied law at Oxford as a Rhodes Scholar, graduating with first class honors. He later studied Arabic in Cairo, Chinese in Taipei and Japanese in Tokyo. Kristof joined The New York Times in 1984, serving as a correspondent in Los Angeles, Hong Kong, Beijing and Tokyo.

More information on ISU lectures is available online or by calling 515-294-9935.

Doors open at 7:15 p.m.
Free and open to the public
Tickets are not required

Note: This event will not be recorded for podcasting.

"Sex Trafficking in the USA"