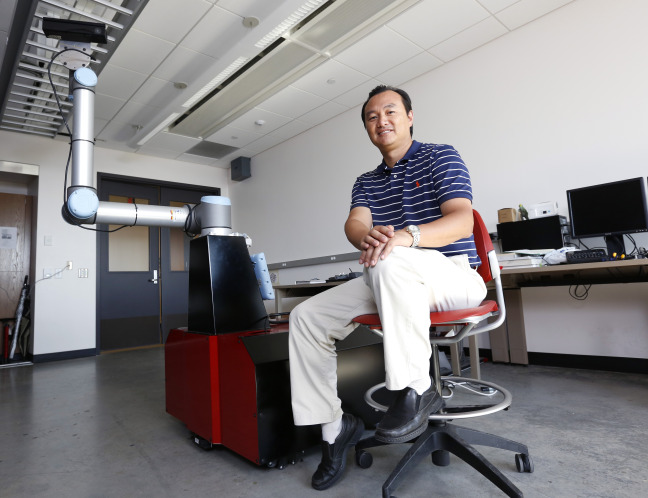 Lie Tang has devoted his career to designing cutting-edge equipment that automates agricultural work. Tang is pictured here with the Enviratron in his ISU laboratory. Photo by Christopher Gannon. Larger Image.

AMES, Iowa – Lie Tang’s research has contributed to innovations such as tractors that drive themselves and robots that hunt down weeds.  In fact, Tang has devoted his career to expanding the use of automated machines to carry out agricultural work.

The technology, some of which would seem at home in the pages of a science fiction novel, can allow farmers to perform more work in less time and with greater precision. Automation represents an important front in what Tang calls a new era of agricultural machinery.

But this new era – in which automated machines carry out tasks that used to require the full attention and effort of one or several human beings – brings with it a new set of challenges.

“Our brains are such advanced machines,” he said. “It’s very difficult to create machines that can perform tasks that we do as a matter of routine. We’re still a long way from machines with true intelligence, but we’re laying a foundation with automated systems.”

Tang, an associate professor of agricultural and biosystems engineering at Iowa State, calls agricultural automation his passion for the last 20 years. His research has touched everything from plant breeding to livestock feeders to weed control.

Though many of the automated technologies he and other ag engineers are devising may take years to reach the market, he said their potential to improve efficiency in production agriculture is staggering.

Many of the technological advances in modern agriculture depend on data. Capturing and processing information on crop varieties, environmental factors and soil conditions can help farmers make better decisions and help scientists advance their research.

Until recently, gathering that kind of data required significant hours – if the data were accessible at all. Accordingly, Tang, a native of Sichuan, China, who joined the ISU faculty in 2004, has worked on several projects that automate the data-gathering process. 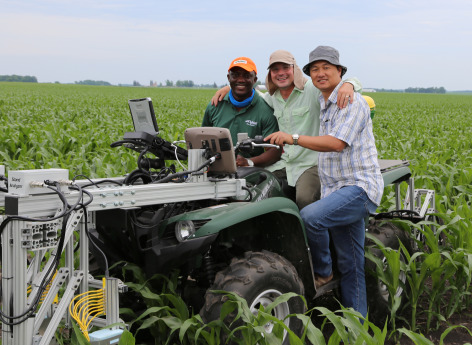 Tang spent 10 years designing the Stand Analyzer, an apparatus that uses laser imaging to gather basic data on crops. When attached to an all-terrain vehicle, the analyzer gathers information much faster and more accurately than a human can by hand. Photo courtesy of Lie Tang. Larger image.

He poured a decade of work into a “Stand Analyzer,” or an apparatus attached to an all-terrain vehicle that uses a laser scanner to record crop populations, spacing between plants and stem thicknesses up to four rows at a time.

Tang said that’s all basic information that previously could be ascertained only by manually walking rows and counting plants. But the stand counter covers the same ground in 10 minutes that it would take a human eight hours to complete. And it takes more accurate readings too.

“This is the sort of device that you think should have been invented long before now because it provides such fundamental data,” Tang said. “But the technology wasn’t available until recently.”

He’s also worked on a robot called the AgRover, which can survey fields and record data without the benefit of a driver. The small, electrically powered vehicle resembles something astronauts once drove on the surface of the moon. It can be equipped with a range of instruments designed to gather information at programmed locations.

He’s also led the design of an automated vehicle called Phenobot 1.0. Using a lawn tractor as the basis, Tang equipped the vehicle with an automated driving system and sensors designed to help plant breeders and plant scientists with phenotyping, or observing the physical characteristics of hybrids that are being tested. Tang’s group has already started to develop the next generation of the PhenoBot, which will be lighter and even more autonomous.

Tang has also joined Steven Whitham, a professor of plant pathology and microbiology, and Stephen Howell, a Distinguished Professor of genetics, development and cell biology, to design an innovative new pilot system for gathering data on plants grown in greenhouses. Dubbed the “Enviratron,” the facility will rely on a small mobile robot that travels automatically among several growth chambers to survey plants. The current facilities designed to gather the kind of data utilize conveyor belts to move the plants to the sensor device. The Enviratron, on the other hand, brings the sensors to the plants, which will allow for more accurate readings without the necessity of moving the plants.

The facility that will house the Enviratron is currently under construction at the ISU Agricultural Engineering and Agronomy Research Farm.

New innovations in agricultural machinery often take years after they’re designed to enter the market, but Tang said automated steering systems are poised to become a staple for farmers in the near future.

Tang has helped to advance steering systems that use GPS technology to optimize the routes tractors must take to plant, cultivate and harvest crops. The automated system removes the inconsistencies and errors that may occur with a human driver, but it still requires an operator to sit in the driver’s seat. But, with a computer handling the steering, the driver can pay closer attention to other concerns such as planter monitoring systems, Tang said. 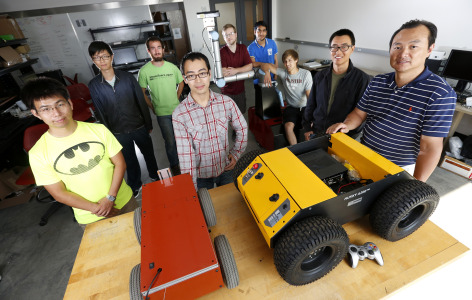 Tang in his lab with graduate students who work on his robotics projects. Photo by Christopher Gannon. Larger image.

The algorithms utilized by the system account for the size and shape of fields, as well as significant terrain features that might have an impact on soil erosion. Tang’s algorithms may lead to the next generation of automated steering systems that turn the tractor at the end of rows to make optimal use of time and space, and it can even handle the coupling of a tractor with other implements such as sprayers or planters – all with minimal effort from the operator.

Still, even such advanced systems only hint at what might be possible for agricultural technology decades hence.

Engineers are working toward machines with real intelligence, a concept Tang defines as equipment that’s able to learn and adapt based on experience. Intelligent farm equipment is still years away, he said, but the automated systems under development today point to a future when such advances are possible.

“If you look at the technological and machinery advancements in agriculture over the last century, it’s been an engineering marvel,” Tang said. “But we’re in a new era now where we’re going to see development of automation and new technologies to optimize control and operations for producers.”