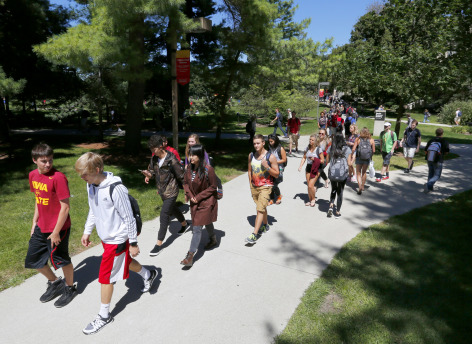 It’s the seventh year of record enrollment and the ninth consecutive year of growth at Iowa State. In the last decade, overall enrollment at Iowa State has grown 40 percent. The student body represents every Iowa county, every U.S. state and 118 countries.

“Our enrollment is demand-driven,” said President Steven Leath. “We’re proud to continue to educate more Iowa students than any other institution in the world. Students are choosing Iowa State because of our renowned faculty, our supportive culture and because we offer the programs that are driving our economy. Our enrollment strategy has remained the same, and that is our steadfast commitment to our land-grant mission.”

Nearly 95 percent of Iowa State graduates are either employed or pursuing further education within six months of graduation.

Iowa State’s first-year, full-time student retention rate jumped a full point to 87.4 percent, well above the national average and just under ISU’s record of 87.7 percent set in fall 2011. The average ACT score for new freshmen also has increased the last two years, to 25.09 in fall 2015.