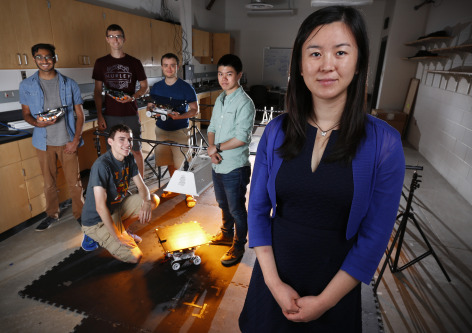 Ran Dai, foreground, is working to develop technologies that will help robots manage their energy use to improve efficiency and battery life. Many students are assisting with the project, including, back row, left to right, Kishan Patel, Justin Vandentop, Adam Kaplan and front row, left to right, Nathaniel Kingry and Yen-Chen Liu. Larger photo. Photo by Christopher Gannon.

Dai, an Iowa State assistant professor and Black and Veatch Faculty Fellow in aerospace engineering, is developing power-management technologies that would allow land- and air-based robots to monitor solar conditions so they can maximize operating efficiency and battery life.

That’s right. The robots would decide for themselves the best way to maximize energy production and minimize energy loss.

“It’s these solar-harvesting and power-management functions that can make any robot work longer, or even permanently,” Dai said. “That could make these robots smarter than the Mars rovers.”

Those smart robots could be put to work in all kinds of applications, including search and rescue, agriculture, surveillance or environmental monitoring.

Dai’s power-management research is supported by a five-year, $500,000 grant from the National Science Foundation. The grant is from the foundation’s Faculty Early Career Development (CAREER) Program designed to support the research and teaching of junior faculty.

Dai has been working on power-management technologies since her days as a post-doctoral researcher at the University of Washington in Seattle. That project involved real-time management of aircraft power systems to increase the energy efficiency of Boeing 787s.

“I was motivated by that project,” Dai said. “I wondered if we could apply that power-management technology to other vehicles. Could we make aircraft and land vehicles use less power and work longer?”

Dai is now focusing that question on solar-powered robotic vehicles.

One key idea was to find ways to make a robot energy-aware and autonomous. That way it could recognize changing solar conditions and make necessary adjustments. It could, for example, sense the sun has shifted and left it in shade. The robot would know it should move to sunshine for better power and a faster battery recharge.

Dai started the project with a toy-sized robot with a two-watt solar panel. She ran the robot under greenhouse lights in her Automation and Optimization Laboratory to make sure her ideas would work.

“But that robot wasn’t smart enough,” she said. “It couldn’t decide if it should run faster when the lights were bright or slow down when they weren’t so bright.”

And so – with the help of graduate students Adam Kaplan and Chuangchuang Sun plus undergraduate assistants Nathaniel Kingry, Kishan Patel and Justin Vandentop – she’s built two more generations of bigger and smarter land robots. She’s also working with two teams of undergraduates from Iowa State’s Make to Innovate program to design and build an unmanned aerial vehicle for the project.

“The project is going well,” Dai said. “We’re upgrading to the third generation of our land robot. Our objective is for the latest robot to work outdoors.”

Ultimately, she’d like the air and ground robots to work together. The air robot, for example, might notify the ground robot of more important areas to investigate or of obstacles in its path.

The combination of all those technologies, Dai wrote in a project summary, will be a “transformative approach to the development of next-generation, solar-powered robotic systems.”

Ran Dai is developing power-management technologies that would allow solar-powered robots to maximize energy production, minimize energy loss and maintain long-term operations. The project is supported by a five-year, $500,000 CAREER grant from the National Science Foundation.

“It’s these solar-harvesting and power-management functions that can make any robot work longer, or even permanently. That could make these robots smarter than the Mars rovers.”