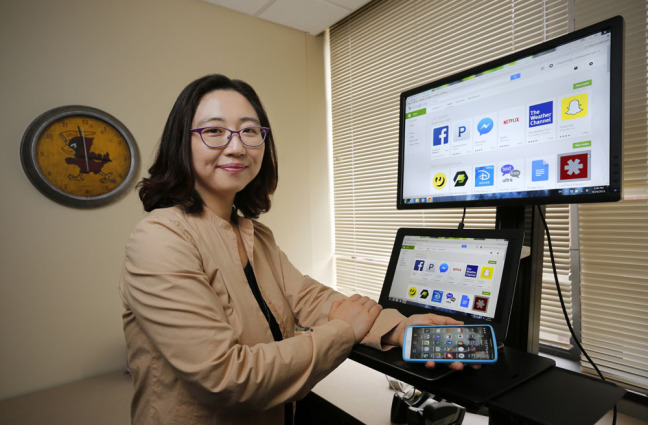 AMES, Iowa – Mobile apps are changing the way brands connect with consumers and have the potential to boost a company’s bottom line. According to a new Iowa State University study, there is a direct link between app use and purchase activity – the more engaging the app, the more customers will spend.

“It could be a total game changer if a company provides an app that’s well functioning and offers some consumer benefit,” said Su Jung Kim, lead author of the study published in the Journal of Interactive Marketing and an assistant professor in Iowa State’s Greenlee School of Journalism and Communication.

Kim and colleagues at Northwestern University examined mobile app data for an international loyalty rewards program. They looked specifically at the use of information lookups (checking point balances, transaction history and reward items) and check-ins (identifying location at stores affiliated with the program) to determine if these popular interactive features influenced consumer spending.

Even though the app did not include a purchase feature, it did drive sales. Customers who downloaded the branded app and continued using it, over the course of three months, increased spending by 19 to 48 percent. The highest increase was among customers using both interactive features. Researchers tracked purchase behavior through the accrual of reward points. Not surprisingly, younger customers were more likely to use the app than older customers.

One shot to make a first impression

The findings are significant considering the growth in mobile apps. Studies project that the number of downloaded apps is expected to surpass 268 billion by 2017. However, more than half of the apps that are downloaded are deleted after one use, Kim said. To capitalize on the mobile app market, companies must create an app that provides value to consumers, she added.

“We understand the urge of brands wanting to get an app out on the market, but they really need to take caution and test it. Customers are not going to give the app a second chance,” Kim said. “We found that people who stop using the brand mobile app after they download it become disengaged. In terms of purchase behavior, they purchase less frequently and spend less money.”

The mobile app needs to be more than a way to promote the brand. Kim suggests companies conduct surveys and focus groups prior to development to know what consumers want from the app. She says brands must also dedicate resources to ongoing monitoring and maintenance to make sure the app is compatible as operating systems are updated. And continued marketing is essential to keep customers engaged and using the app.

Consumer use of mobile apps and other online platforms is just one factor that can affect purchases. Product reviews and social media posts also influence their perception of the brand. In a separate study, Kim and her colleagues at Northwestern University analyzed how negative electronic word of mouth impacts those posting and those viewing the comments. The paper is published in the journal Computers in Human Behavior.

Kim says relatively few people post online comments, but many more read and rely on those reviews for brand information. The study, which consisted of two parts, first looked at the effect of negative reviews on purchase activity. Researchers found that viewers of the negative comments subsequently bought less. However, message posters purchased more if they had some interaction with the company, such as redeeming points, which reminded them of the brand’s value. Purchases declined if posters had no interaction.

For the second part of the study, researchers conducted an experiment to gauge consumer reaction to a company apology. The effect was just the opposite. Viewers had a positive impression – they felt the company cared, was trustworthy and honest. Posters were less impressed. It’s not possible to determine from the data the motivation behind the comments, but Kim offered this explanation for their response to the apology.

“People who post are likely more engaged, more loyal or committed to the brand, so they are not going to be satisfied with just an apology; they need more,” Kim said.  “For viewers, their engagement on the subject matter is not as great as the posters, so just recognizing the fact that the company apologized was enough.”

In addition to an apology, companies should consider offering posters a coupon or some other incentive, Kim said. The response can vary depending on the situation. In the paper, researchers cited JetBlue’s Customer Bill of Rights as an example of how prompt response to negative electronic comments can regain customer trust and satisfaction. Most importantly, Kim says companies must recognize the influence of online word-of-mouth and respond appropriately to customer concerns.

“The worst strategy for brands is to not do anything,” Kim said. “As a brand you should have some gesture of acknowledgement, an apology, coupons or incentives. It’s really important to show both posters and viewers that you care. Then you can start to develop some different strategies for posters and viewers, because their motivations are different; their behaviors are different.”

Mobile apps are changing the way brands connect with consumers and have the potential to boost a company’s bottom line. According to a new Iowa State University study, there is a direct link between app use and purchase activity – the more engaging the app, the more customers will spend. In a related study, researchers also examine the effect of negative online reviews.

“We understand the urge of brands wanting to get an app out on the market, but they really need to take caution and test it. Customers are not going to give the app a second chance."

Su Jung Kim, assistant professor in the Greenlee School of Journalism and Communication