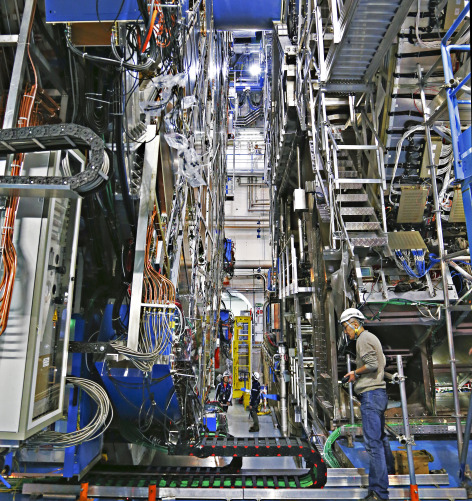 Engineers and technicians upgrade the ATLAS Experiment for the second run of the Large Hadron Collider. Larger image. Photo, image courtesy of CERN.

Iowa Stater helping to manage the U.S. ATLAS Experiment and its hundreds of physicists 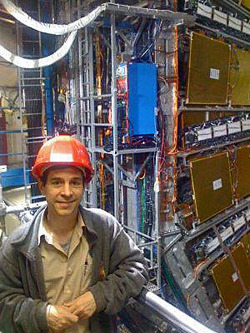 Jim Cochran at the ATLAS Experiment.

For many years, the top quark has been part of his research work in high-energy physics. Even though the particle was discovered two decades ago, it still has particle physicists asking and wondering.

“The top quark’s mass is off the scale compared to the rest of them,” said Cochran, an Iowa State professor of physics and astronomy. “That has to be telling us something. It’s a gigantic thing. It’s 175 times the mass of a hydrogen atom and we don’t know why. Why would we have this range of masses?”

But Cochran doesn’t have a lot of time for those questions right now. Since 2013, he’s also worked as the deputy manager of the U.S. ATLAS Operations Program supported by the U.S. Department of Energy (DOE) and the National Science Foundation (NSF). That keeps him busy helping to oversee the U.S. contribution to ATLAS, one of the huge particle detectors at the Large Hadron Collider near Geneva, Switzerland.

There’s plenty to look after:

Keeping track of all that makes for a lot of meetings and regular travel to Europe.

“I enjoy many parts of this,” Cochran said. “The travel is a bit much. And it can be stressful dealing with people who aren’t always transparent. But overall, it has been interesting.

“You can’t allow yourself to get too stressed. You won’t always make the right decisions, but you do your best.”

Moving up to deputy director

Cochran earned his undergraduate physics degree from Georgia Tech and his doctorate from Stony Brook University in New York. He worked as a postdoctoral research associate for the University of California, Riverside before joining the Iowa State physics faculty in 1998.

He spent his graduate student and postdoc years at Fermilab in Batavia, Illinois, working on the DZero Experiment at the Tevatron accelerator. When Cochran joined Iowa State, he switched to the BaBar Experiment based at the SLAC National Accelerator Laboratory in Menlo Park, California.

When BaBar stopped taking data in 2008, Cochran joined other Iowa State high-energy physicists as they transitioned to the ATLAS Experiment at the Large Hadron Collider.

Those Iowa Staters – Cochran; Soeren Prell, a professor; Chunhui Chen, an associate professor; and Nils Krumnack, a senior scientist – are part of the collaboration working on various aspects of the experiment, including the ATLAS Pixel Detector. That’s the innermost layer of a machine that’s 50 yards long and 27 yards in diameter. The machine’s various parts detect, track and measure the fundamental particles flying off collisions of protons or lead ions.

As the ATLAS work progressed, Cochran was asked – “I had my arm twisted and eventually said, ‘Yes’” – to lead the group providing support for the American analysis of detector data. One of his first tasks was to ask physicists what was and wasn’t working with the analysis.

There were concerns about the computing infrastructure, so the analysis team conducted a “stress test.” They wanted to see if the experiment’s computer systems could reliably take all the data from Europe and distribute it to physicists around the country.

“We did some testing and we found some problems,” Cochran said. “It showed where the weaknesses were and where to fix things.”

A few years later, Michael Tuts of Columbia University was slated to step down as manager of the U.S. ATLAS Operations Program and the deputy at the time, Srinivasan Rajagopalan of Brookhaven National Laboratory, was slated to move up to manager. Those pending transitions launched the search for a new deputy.

“It was natural to consider Jim for this role given his experience in the area of physics support,” Tuts said. “Jim is a thoughtful scientist with a calm personality, which can be a valuable trait to have in this position where you have to deal with 45 different U.S. institutes, each with special needs.”

The operational challenges go far beyond those 45 institutes.

“The skill set for the job is less MBA-like, but more related to the ability to identify physics priorities, critically evaluate cost estimates to see that we are constantly getting the best value for our money, being sensitive to the needs of a diverse set of physics groups, interfacing with funding agencies (we are constantly being reviewed) and ATLAS management,” Tuts said. “A key characteristic of someone in this position is to make sure that he/she has the respect of 500 U.S. physicists – Jim has that respect.”

Adding to the department portfolio 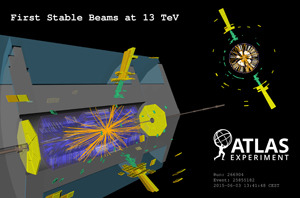 Ask Cochran about the details of U.S. ATLAS and he’ll search his computer for documents and print the latest numbers:

Even though the United States isn’t a member state of CERN, it’s a major contributor to the Large Hadron Collider and is the biggest contributing country to the ATLAS Experiment. America’s continued involvement is very important to collider and experiment leaders as they plan upgrades over the next decade.

The U.S. contribution for the total upgrade could be close to $1 billion. About a quarter of that would be to improve the ATLAS detector.

That means budget meetings are very much a part of Cochran’s operations work. He talks about meetings in which the operations team goes through the budget line by line and physicist by physicist. Then the team looks at lists of tasks and makes decisions about priorities. That’s how the team decides what’s funded and what isn’t.

Frank Krennrich, professor and chair of physics and astronomy at Iowa State, said it’s very valuable to have a faculty member making that kind of contribution to a large, international experiment.

“It’s a good thing to have people with a wide variety of research experiences,” he said. “It provides the department with a wide portfolio of skills.”

Besides, Krennrich said, it’s important for researchers to accept management responsibility for these big projects.

Cochran, as he goes from meeting to meeting and flight to flight, said he’s still excited to be a part of the experiment’s U.S. leadership team.

“I feel more like a steward,” he said. “I’m looking after something and doing the best that I can.” 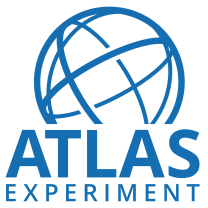 Iowa State's Jim Cochran is helping to oversee the U.S. contribution to ATLAS, one of the huge particle detectors at the Large Hadron Collider near Geneva, Switzerland. It's a busy job at the biggest particle accelerator on the planet.

“I enjoy many parts of this. The travel is a bit much. And it can be stressful dealing with people who aren’t always transparent. But overall, it has been interesting.

“You can’t allow yourself to get too stressed. You won’t always make the right decisions, but you do your best.”

Jim Cochran, professor of physics and astronomy and deputy manager of the U.S. ATLAS Operations Program

This series of articles tells the personal stories of Iowa State University faculty and scientists whose work is changing the world for the better. Here are other change agents on campus: