Author of 'My Life as an Undocumented Immigrant' will speak at Iowa State Oct. 20 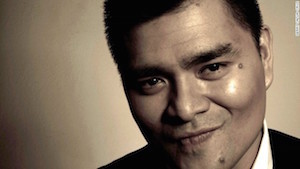 AMES, Iowa -- Pulitzer Prize-winning journalist Jose Antonio Vargas, who wrote a groundbreaking 2011 essay for The New York Times Magazine that revealed and chronicled his life as an undocumented immigrant, will speak at Iowa State University.

"There are believed to be 11 million undocumented immigrants in the United States," Vargas wrote in the essay. "We’re not always who you think we are. Some pick your strawberries or care for your children. Some are in high school or college. And some, it turns out, write news articles you might read. I grew up here. This is my home. Yet even though I think of myself as an American and consider America my country, my country doesn’t think of me as one of its own."

Vargas will discuss his life before and after that trailblazing essay in his presentation, “Define American: My Life as an Undocumented Immigrant." It will be at 8 p.m. Tuesday, Oct. 20, in the Great Hall of the Memorial Union. His talk is free and open to the public.

Born in the Philippines, Vargas was 12 when his mother sent him to the U.S. to live with his grandparents. He embraced all things American and watched TV to "cultivate a homegrown accent." When he was 16, Vargas learned he did not have the proper credentials to be in the U.S. Nevertheless, he excelled in school, graduated from San Francisco State University and became a successful journalist.

Vargas has written for the San Francisco Chronicle, Philadelphia Daily News, The Washington Post, Huffington Post, Rolling Stone and The New Yorker. In 2006, he wrote a series on HIV/AIDS in Washington, D.C., that inspired "The Other City," a documentary feature film he co-produced and wrote. Vargas was part of The Washington Post team that won a Pulitzer for coverage of the Virginia Tech massacre in 2007.

A year after his "coming out" essay, Vargas was on the cover of Time magazine with fellow undocumented immigrants for his cover story on immigration, "Not Legal Not Leaving." He then produced and directed "Documented," a documentary feature film on his undocumented experience. The film has aired on CNN.

Vargas is the founder of Define American, a non-profit media and culture organization that seeks to elevate the conversation around immigration and citizenship in America. He also is founder and editor of #EmergingUS, a Los Angeles Times digital magazine focusing on race, immigration, identity and the complexities of multiculturism. "White People," Vargas' television special about what it means to be young and white in American aired this year as part of MTV's "Look Different" campaign.

“Define American: My Life as an Undocumented Immigrant" 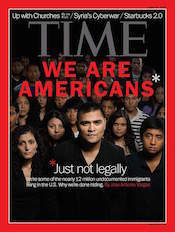