AMES, Iowa – There you were, inside the C6 virtual reality room at Iowa State University, surrounded on six sides by 100 million pixels and completely immersed in the sights and sounds of game day at Jack Trice Stadium.

The band marched in I-S-U formation. The cheerleaders did flips. You turned around and took a look at the new stands and the Sukup End Zone Club. The “Cyclone Weather Alert” played on the big video boards. Then the visiting team entered the stadium to boos from the full-house crowd.

The Cyclones kicked off, forced a fumble and recovered the ball. After a quick touchdown, the Cyclones celebrated in the end zone and, when you looked up, fireworks exploded over the stadium.

Sounds cool, right? And fun, sort of like being inside a video game.

Chernoff is in charge of the team’s recruiting department and part of his job is to find new and better ways to recruit student-athletes to Iowa State. The best way is to bring them to campus for a game-day visit, but there are only six home games a year and expenses-paid, official visits are restricted to high school seniors.

But the team talks to younger players. The recruiting season also extends well beyond the football season. And Iowa State’s recruiting territory includes football hotbeds such as Florida, Texas and California. How could the team provide a game-day experience to off-season visitors and maybe even out-of-state prospects?

The answer was just across campus: the Virtual Reality Applications Center.

Hey, don’t we do virtual reality?

The football team’s interest in a virtual game day began in the summer of 2013 when Head Coach Paul Rhoads saw a story about virtual reality in sports.

Chernoff said that led to discussions about the university’s own strength in virtual reality technology. Before long Chernoff was meeting with James Oliver, a University Professor, the Larry and Pam Pithan Professor in Mechanical Engineering and the director of Iowa State’s Virtual Reality Applications Center.

Oliver was expecting to spend the meeting explaining how hard it is to use virtual reality as an athletics training tool. But when the talk turned to re-creating the Jack Trice environment – including the new South End Zone Project – Oliver said that was a perfect fit with the center’s expertise and facilities.

So the football team and the Athletic Department agreed to provide about $50,000 for the development of a single virtual game-day application that could run on campus and on the road.  Vijay Kalivarapu, an assistant scientist for the center, took the lead and hired some students to help.

It turns out the project was full of challenges – enough, in fact, to fill a 14-page paper the research team presented in February to an electronic imaging conference in San Francisco.

The paper describes the technical difficulties of developing an application that works on Iowa State’s C6, a 10-foot by 10-foot virtual reality room that surrounds users with computer-generated 3-D images at the world’s highest resolution, and on an Oculus Rift, a low-cost, portable, head-mounted display attached to a laptop.

The paper also reports how well users thought the application conveyed the Jack Trice Stadium experience. How, for example, did virtual reality compare to a video? And can a low-cost device still provide an effective virtual reality experience?

The conclusion: “This result is important because it addresses the potential value of the ‘immersion’ effect afforded by virtual reality,” Oliver said.

A regular stop on recruiting tours 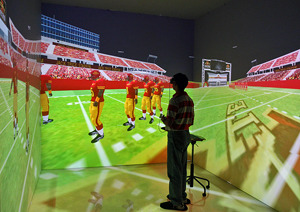 During the summer, the football team loads its top junior prospects onto golf carts and tours them around campus. When it’s available, the C6 and the game-day application are now a regular stop.

Sometimes in the fall, even when recruits are going to a big game, the team will take them to the C6, too.

“Listen, Iowa State is a place on the cutting edge of technology, including the development of the computer,” Chernoff said. “The C6 says something about the kind of education students get at Iowa State.”

Besides, he said, “These kids are all video game players. To be in a virtual reality simulation, they’re inside a video game in a lot of ways.

“This is something that makes Iowa State special.”

Kalivarapu said he’s still working on a few tweaks to improve the interactivity of the application. He said it runs fine on the head-mounted display, but he’d like to see a higher framerate in the C6.

Kalivarapu is happy to talk about the technical details of how the application was developed, including game engines, player models, synchronization, high-definition graphics, framerates, the C6’s 48-node computer cluster and all the network traffic involved. He’ll also mention the tradeoffs and decisions that have to be made – such as slightly less detail in the uniforms and helmets in exchange for better interaction with the application.

All in all, he likes how the technology came together to create a unique Cyclone experience.

“We’re putting recruits inside the tunnel before a game,” he said. “They can see the tunnel and the rest of the stadium as the players run out. So these recruits can already feel like they’re a part of the team.”

Iowa State University researchers are using the sophisticated tools of the Virtual Reality Applications Center to create a virtual Jack Trice Stadium for football recruits. It's a way to show off the stadium's game-day atmosphere and the university's strengths in science and technology.

“Listen, Iowa State is a place on the cutting edge of technology, including the development of the computer. The C6 says something about the kind of education students get at Iowa State.”

Gerrit Chernoff, the director of player personnel for the Cyclone football team

“This result is important because it addresses the potential value of the ‘immersion’ effect afforded by virtual reality.”