AMES, Iowa – Standing under the bright lights and in front of a captive audience at the M-Shop, Nick Seymour found himself in an unfamiliar and terrifying situation.

“I was in a different world; my brain was not on stage,” Seymour recalls. “I was just going through my set and rambling off jokes.”

But then it all clicked. About three-quarters of the way through his 10-minute comedy set – the required final for Iowa State University’s Comedy College – Seymour says his brain re-engaged with the sound of laughter.“I was in a different world; my brain was not on stage,” Seymour recalls. “I was just going through my set and rambling off jokes.”

“I hated being on stage for the first seven minutes and then during the last three minutes I realized people were laughing and it was OK,” Seymour said. “I had told a joke that was really funny and everyone laughed, like hard. There was just this long pause of laughter and I thought, ‘Wait a second, I did something. I wrote this joke, I came up with it. I’m funny.”

The mechanical engineering student laughs when thinking about that moment. He readily admits stand-up comedy does not come naturally. In fact, Seymour says his parents “freaked out” when he told them he was taking a comedy course, because he struggled with speech class in high school.

But those final three minutes of his set made such an impact that he didn’t want it to end. So after “graduating” from Comedy College – a semester-long seminar sponsored by the Iowa State Honors Program – Seymour and some of his fellow graduates created the Stand-Up Comedy Club at Iowa State this past January. Club members meet weekly to develop new material and they regularly perform at venues in Ames and central Iowa.

“We take every opportunity to perform,” said Rachel Reyes, who serves as the club’s treasurer. Reyes, a mathematics and English major, was a Comedy College student when Seymour came to class to recruit new members. At the time, she had never set foot on stage to perform standup, but figured she’d give the club a shot and has no regrets.

“It was a good opportunity to write jokes and prepare for the final, but to also keep doing more shows after the class,” she said. “I never thought I’d be doing standup when I first came to college. I love telling my friends back home and my family, ‘Yea, I do standup comedy.’ I love their reactions because they never would have expected that out of me.”

Gavin Jerome, a professional entertainer, and Peter Orazem, a University Professor of economics, teach the Comedy College seminar. They give students the tools to develop a good bit, effectively deliver a one-liner and add humor to all aspects of life. The course is not designed for students to make a career out of stand-up comedy, but to see how the skills of standup can benefit their careers. Seymour says it’s already paid off for him. He credits Comedy College with giving him greater confidence when attending campus career fairs.

“Before I took Comedy College, I talked to a bunch of employers, but no interviews. I was terrified, I was nervous. The semester after Comedy College, I had seven interviews and an offer for an internship in the summer,” Seymour said. “I grew in my ability to talk with people, relate and even make jokes. I would have never expected that going into the class; I thought it would just be fun.”

Rachel Reyes loves the reaction she gets from friends and family when she tells them about the comedy club. Photo by Christopher Gannon (Larger image)

The class had a similar impact on Reyes.

“The class has helped me become more confident with public speaking,” Reyes said. “I still get nervous, but I’ve come a long way. It’s just fun to be on stage to perform the material I write, and have people enjoy it.”

Nearly all of the club’s members are Comedy College grads. It’s not a requirement for membership, but since the purpose of the club is to perform, it’s helpful for students to first test their skills and material in class. Seymour and Reyes say that experience helps ensure that everyone – those on stage and in the audience – has a positive experience.

The Stand-Up Comedy Club’s next performance is Friday, Nov. 13, at the Talent Factory in Nevada. The show has an added bonus for the students. Two will be selected to open the following week for comedian Tim Bedore. Click here for more information about the show and tickets.

The Iowa State Stand-Up Comedy Club is about more than telling jokes and making people laugh. Students say performing on stage builds self-confidence and skills they'll use in their future careers. 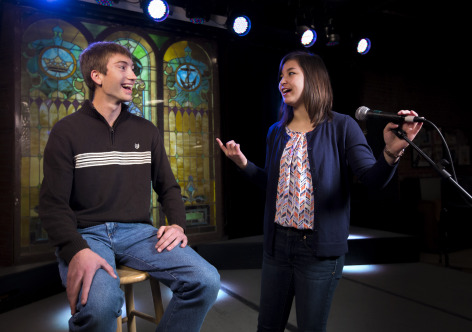