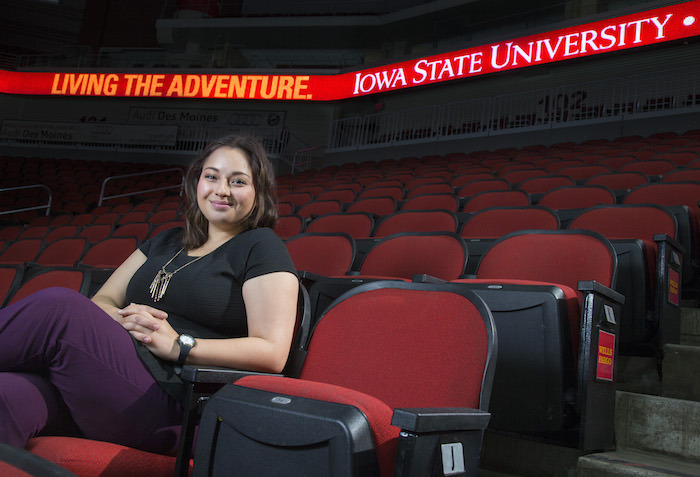 AMES, Iowa — An Oxfam Hunger Banquet on campus ... an international conference in D.C. ... a James Taylor concert at the Well ... Iowa State University graduating senior Valerie Villa has helped manage them all.

But on Saturday she'll be a participant in the biggest event of her life (so far) when she walks across the stage at Iowa State's fall commencement.

Chances are, Villa will pay as much attention to what's going on behind the scenes as to what's happening on the stage in front of her. Even with the diploma in her hand, Villa will be driven to learn more.

Finding support in family and community

Villa was one of those kids for whom we donated an unwrapped toy at Christmas. Born in Los Angeles and raised in six states before settling in Sioux City at 15, she is the fifth of six children in a single-parent family.

"My mother never gave us up. Instead she taught us the value of work and family," Villa said. “As far as I'm concerned, we had a great childhood. We didn't necessarily have the material things, but we had clothes, food and each other. That was everything."

Although moving every couple of years might make a child shy and withdrawn, it had the opposite effect on Villa. Her "nomadic childhood" helped her become confident, social and resourceful — traits she relies on in managing events — and her life.

As a teen in Sioux City, Villa was a regular at the Norm Waitt Sr. YMCA's after-school activities. She soon latched on to TRIO, the federal outreach and student services program that helps low-income and first-generation college students progress from middle school through post-graduate academics.

"When you grow up in an environment where almost half of your class is dropping out and a lot of negative things are going on, it's hard to flourish," she said. "Going to college just isn't discussed. Society doesn’t say you can really do this. But you can. It's upsetting because people with so much potential and talent don't realize that college is actually a possibility."

If no family member before you has negotiated the path to a degree, "it's confusing and complicated," she said. "TRIO answered all my questions along the way. I wouldn't have made it without their support."

"I used to want to be a human rights lawyer to help people," Villa said.

But while working as a YMCA youth instructor, a different career came to mind.

"The community events I did there taught me the positive impact good events can have on a community. Events have the ability to help people and make positive social change. And that really inspired me," Villa said.

She also recognized that the "biggest moments and greatest memories of my life" occurred while participating in an event— a Quinceañera, a Race for the Cure, a leadership conference or a concert.

"Events opened a world of opportunities to me when I was a child," she said. "Color, class and all of those things didn't exist in that world."

By the time Villa earned an associate's degree at WITCC, where she managed fundraising and TRIO events, she was well on her way to a major in event management.

As soon as Villa arrived at Iowa State, she joined the Event Management Club and the Professional Convention Management Association (PCMA). She jumped at each opportunity to volunteer and was quickly accepted to work at the American Israel Public Affairs Committee (AIPAC) Policy Conference. They paid airfare and all expenses for students to work at a major conference in Washington, D.C., for 14,000 attendees, including Israel's Prime Minister. She worked with dozens of students and professionals on thousands of critical minutiae for the high-powered event.

"Some of us were lucky to have five hours of sleep. At the end of the conference, many student volunteers were saying, 'This is too much work. I don't ever want to do this again,' "Villa said.

"Working the conference was exhausting, but I loved every second," she said. "The moment I knew that I belonged in the meetings and events industry was when I discovered my passion was in the art of bringing people together for a common objective — making a difference in the world."

She volunteered at AIPAC again the following year, working as a breakout session coordinator. Villa learned not only how to flip a room in 30 minutes, but also how to encourage a speaker to start and stop on time. (Not an easy task, she said.)

Villa has packed in as many experiences as possible during her two years at Iowa State. With the Event Management Club, she worked at the PCMA Convening Leaders Conference. In addition to volunteering at Ames and campus events, Villa was the first event intern at the Iowa Events Center. (In fact, there was no internship position until her resume landed on the event director's desk following an ISU Career Fair.)

The Iowa Events Center internship allowed Villa to learn about the "big three" — conferences, conventions and arena events. And it led to freelance gigs as a runner for Comcast Spectacor shows (shuttling bands and crew members for James Taylor, The Eagles and others).

At the end of her first semester at ISU, Villa wrote an essay application for the 2015 Diversity Scholarship from PCMA's Education Foundation. She wrote about her challenges growing up, what events had meant to her during childhood and why she believes events can make a difference in the world. She won the scholarship and was invited to speak at the national conference in June.

"It was amazing, I had the pleasure of networking with people in the profession," Villa said.

"If someone had told me two years ago that I would experience working at AIPAC or speaking to scores of professional meeting planners, I would not have believed it," she said.

"At Iowa State, opportunities have knocked at my door and I've learned to just put myself out there. One thing leads to another and it's been an amazing ride," she said. “I don't think I would've had all these opportunities anywhere else.

"One of the best things about coming here is that I've found a new level of potential in myself. ISU has really helped me flourish," she said.

It may have been an amazing ride, but not a free one. Villa has worked for ISU Dining the entire time, freelanced events when she could and cobbled together scholarships. During the five-and-a-half years since she graduated from high school, Villa has paid her way and even helped out her mother during hard times.

Because she's one of the first in her family to graduate from a four-year university, commencement will be a big event for the Villa family. Her mother and sister will be in the audience at Hilton, while other siblings will watch the online live stream from California.

In January, Villa is contracted to work at the 2016 PCMA Convening Leaders Conference in Vancouver.  And while she's in town, she'll drop off a resume — at the TED headquarters.

"From TED Talks to TED Conferences, their mission inspires," she said. "It would be a dream to work there."

An Oxfam Hunger Banquet on campus ... an international conference in D.C. ... a James Taylor concert at the Well ... Iowa State University graduating senior Valerie Villa has helped manage them all. But on Saturday she'll be a participant in the biggest event of her life (so far) when she walks across the stage at Iowa State's fall commencement. Villa, who had a "nomadic childhood," is a graduate of Sioux City North High School and Western Iowa Tech Community College

"Events opened a world of opportunities to me when I was a child. Color, class and all of those things didn't exist in that world."

"One of the best things about coming here is that I've found a new level of potential in myself. ISU has really helped me flourish."