As 2015 comes to an end, the Iowa State University News Service staff is looking back and sharing some of its favorite and more popular stories of the year. Click on each headline to link to the full release.

With the help of an Iowa State University agronomist, a recently launched NASA satellite will record moisture content in soil across the globe. NASA’s Soil Moisture Active Passive satellite is tracking moisture to better understand weather and climate, especially as they relate to flooding.

New research from an Iowa State University economist found consumers were willing to spend more for biotech potato products with reduced levels of a chemical compound linked to cancer. The findings underscore the importance of efforts to educate consumers on the use of biotechnology in the production of healthful food.

An Iowa State University study, published in the Journal of the American Medical Association Neurology, found a strong association between insulin resistance and memory function decline, increasing the risk for Alzheimer’s disease. Auriel Willette, a research scientist in the Department of Food Science and Human Nutrition, says insulin resistance is common in people who are obese, pre-diabetic or have Type 2 diabetes.

Improbable teams of students and incarcerated women continue to transform acres of barren prison yard into a beautiful, bountiful landscape full of life — and now food. The ongoing partnership between Iowa State University's Department of Landscape Architecture and the Iowa Correctional Institution for Women in Mitchellville is in its third year of providing hands-on learning experiences to students and offenders alike.

Need an incentive to lace up your shoes and go for a run? A new Iowa State University study, published in the Journal of the American College of Cardiology, found running for just five or 10 minutes a day can significantly reduce your risk of death from cardiovascular disease.

Smartphones are a great way to stay connected with family and friends. But what if you suddenly lost that connection? A new Iowa State University study identifies the dimensions of nomophobia to help you determine if you suffer from it.

Parents who are more anxious and emotional can impact the amount of violent video games their children play, according to new consumer research from Iowa State University. Researchers found that parents who were more warm and restrictive were successful in limiting children’s play of violent video games. However, highly emotional and anxious parents had the opposite effect – their children played more.

Iowa State University researchers are using the sophisticated tools of the Virtual Reality Applications Center to create a virtual Jack Trice Stadium for football recruits. It's a way to show off the stadium's game-day atmosphere and the university's strengths in science and technology.

Vincent, a 3-year-old domestic short-haired cat that received prosthetic legs at Iowa State, is making a strong recovery. In fact, his doctor thinks he might start jumping soon. When Vincent was brought to the animal shelter as a kitten, his hind legs were missing below the midway point of his shinbones. 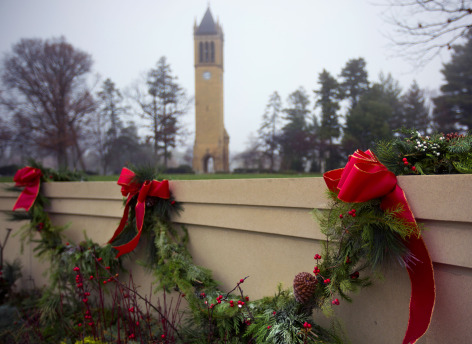 Several publications recognized Iowa State University and Ames in 2015 as a great place to live and learn. Here are just a few: