CdeBaca will discuss fight against child trafficking on Jan. 19 at ISU

CdeBaca, a Huxley native and Iowa State alumnus, will present "On the Frontlines of the U.S. Fight against Child Abuse, Human Trafficking and Sexual Assault" at 8 p.m. in the Memorial Union Sun Room. His talk is part of the university's World Affairs Series: Redefining Global Security. It is free and open to the public.

CdeBaca has worked under three presidential administrations to combat human trafficking and modern-day forms of slavery. He has investigated and prosecuted servitude cases in which victims were held for prostitution and other forms of sexual exploitation, farm labor, domestic service and factory work. He has convicted dozens of abusive employers and helped liberate hundreds of victims from servitude.

In 2009, President Obama appointed CdeBaca to be Ambassador at Large to Monitor and Combat Trafficking in Persons. He stepped down from the Department of State appointment after five years to accept his current position.

Previously, CdeBaca was one of the most decorated federal prosecutors in the Justice Department. He led the investigation and prosecution of cases involving money laundering, organized crime, alien smuggling, official misconduct, hate crimes and human trafficking. He was honored with the Attorney General's Distinguished Service Award for his service as lead trial counsel in the largest slavery prosecution in U.S. history, which involved the enslavement of more than 300 Vietnamese and Chinese workers in a garment factory in American Samoa.

During the George W. Bush Administration, CdeBaca served as Chief Counsel to the Civil Rights Division’s Human Trafficking Prosecution Unit, and was the Justice Department's Involuntary Servitude and Slavery Coordinator during the Clinton Administration. He was instrumental in developing the United States' victim-centered approach to combating modern slavery.

CdeBaca was raised on a farm near Huxley, participated in 4-H and graduated from Ballard High School. He earned his bachelor's degree in political science from Iowa State in 1990, and received his law degree from the University of Michigan Law School, where he was an editor of the Michigan Law Review. 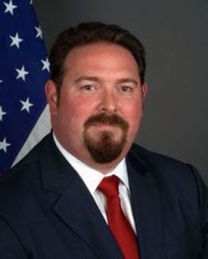