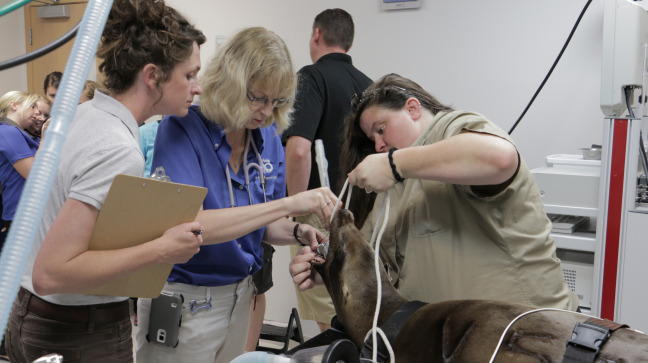 June Olds, center, places an endotracheal tube into the throat of a California sea lion for an endoscopy procedure at the Blank Park Zoo in Des Moines. Photo by Nick Moffitt. Larger image.

Welcome to a day in the life of June Olds, a clinician in the ISU Department of Veterinary Clinical Sciences.

“No two days are ever the same,” Olds said during a recent interview at the ISU Lloyd Veterinary Medical Center. “I can work with a frog, a penguin and a rhinoceros in the same day. I have to be able to switch gears from dental disease in a wallaby to artificial insemination of a tiger to cataract surgery in a sea lion.”

In other words, expect the unexpected.

Olds, a native Iowan from the Waterloo area, took a non-traditional path to becoming the veterinarian at the only zoo in the state accredited by the Association of Zoos and Aquariums. She started her undergraduate work when she was 29, after she had married and started a family. She enrolled in vet school at Iowa State at 32, the same year her son started fifth grade.

Her student experience differed from her classmates, but that offered her some unique advantages, she said.

“I found as a non-traditional student, it was easier for me to focus on my studies and what I wanted to accomplish,” Olds said. “My life experience helped me to know just what my priorities were.”

In 2011, the ISU College of Veterinary Medicine worked with the Blank Park Zoo to create a new position that would allow the two institutions to share a veterinarian. Olds got the job, and she now spends 80 percent of her time working at the zoo and 20 percent teaching veterinary courses at Iowa State. But she’s pretty much always on call for the zoo, she said.

On a recent Saturday, while in the middle of getting a haircut, she had to leave abruptly to tend to a monkey that needed stitches.

Today, Iowa State’s College of Veterinary Medicine offers a wider range of options for students interested in zoological and exotic animal medicine. Olds helped to establish a rotation for fourth-year vet students at Iowa State to work at the Blank Park Zoo for four-week intervals.

“It’s not my goal to turn those students into ‘zoo veterinarians’ but simply to show them the wide array of applications and opportunities that are out there in veterinary medicine,” she said. 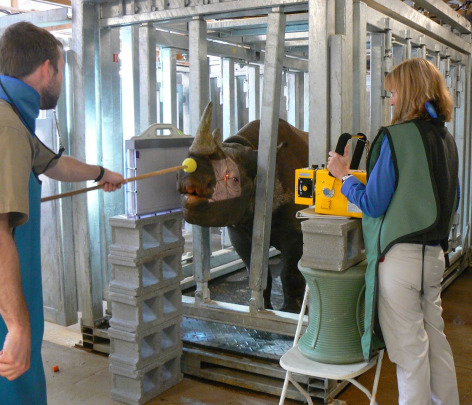 Olds said the variety her job offers is one of its greatest rewards but also one of its biggest challenges. While many veterinarians pick a field and specialize their skills and expertise, zoo vets face a wide range of circumstances on any given day.

Olds said she manages those demands by focusing on what the animals have in common in addition to what makes them different.

“You have to hone in on the commonalities,” she said. “Almost all animals have eyes, and they all work much the same way. They all get cataracts. We all have lungs or something resembling them. We can all get cancer or tuberculosis.”

But she has to remain mindful of the important differences that make each animal at the zoo unique as well. For instance, an efficacious drug to treat one species may be toxic in another species, she said.

“What I enjoy most about being a zoo veterinarian is that it requires me to be a lifelong learner,” she said. “I’m always reading, always learning something new. I’ll never become bored.”

Olds said safety is a major concern in an occupation that requires regular checkups with big cats and rhinos. She said a committed behavior training program with the animals at Blank Park Zoo helps her and zoo staff to manage some of those risks without having to resort to tranquilizer darts.

The behavior training program at the zoo relies on positive reinforcement, usually food, as a tool to get the best results for the animals. Whereas giving a lion or tiger an injection used to require the animals to be tranquilized by a dart, Olds said many of the big cats voluntarily present for an injection for the right reward.

“I can look in the mouth of a sea lion, look in the ears of a leopard, or draw blood from a tortoise or a rhino, all without the use of tranquilizers or force because of the zoo’s positive reinforcement training program,” she said. “That training has improved the veterinary care for these animals and the welfare of both the animals and the zoo staff.”

Instead of food, the zoo’s black rhinos, a critically endangered species, will cooperate for just a little attention.

“The rhinos love affection,” she said. “Just back scratches and belly rubs. They’ll literally relax so much that they fall over or lie down. When you stop, they stand back up again.”

“The pay in zoo medicine is less than many other veterinary disciplines, yet it’s extremely competitive,” she said. “But I don’t think you’ll find the same kind of rewards in any other field.” 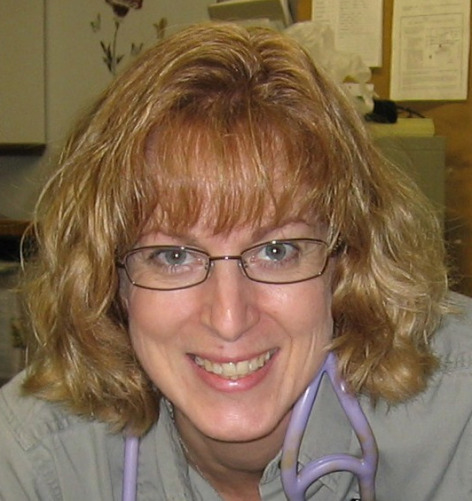