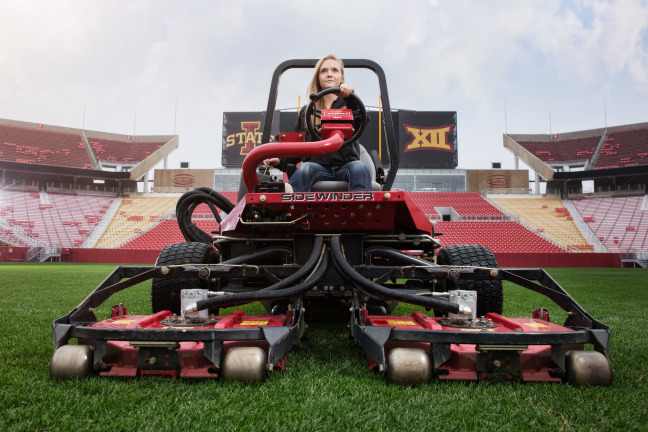 Georgeanna Heitshusen, a junior in horticulture with an emphasis on turfgrass management, will assist the grounds crew in preparation for the Feb. 7 game at Levi’s Stadium in Santa Clara, Calif. Heitshusen was selected by lawn care manufacturer the Toro Co. as this year’s winner of the annual Toro Super Bowl Sports Turfgrass Training Program.

“I was surprised and shocked when I first learned that I’d been selected for the program,” she said. “I was instantly excited about the opportunity.  I was bouncing off the walls with excitement.”

This is the fourteenth year that Toro and the NFL have provided this opportunity for students in the field of turfgrass management. With Heitshusen’s selection, Iowa State has had three students accepted into the Toro program, more than any other college.

Heitshusen plans to graduate from Iowa State in May 2017 and has been instrumental as part of the grounds crew at Jack Trice Stadium. She has helped to mow and maintain the turf at Jack Trice as well as the surrounding football practice fields. As part of an internship at Michigan State University, Heitshusen contributed to the installation of a heated ribbon system on the MSU baseball and softball fields. She also interned with the Iowa Cubs baseball team in Des Moines.

Toro has partnered with the NFL since 1967 to provide equipment to prepare the game field and multiple practice fields leading up to the Super Bowl. In 2003, Toro and the NFL established the Super Bowl Sports Turfgrass Training Program. Developed to recognize one student who has shown exemplary skill in turfgrass management, the program encourages emerging professionals to further grow their knowledge base by assisting the grounds crew for a high-profile game, according to a Toro news release.

To be considered for the program, entrants had to undergo a comprehensive application process. Applicants must be enrolled in at least the second year of a two-year turfgrass program, or in at least the junior year of a four-year turfgrass program. The application must include the signature of a school advisor or representative, as well. Heitshusen was selected from a large pool of talented candidates because of her experience and ambition to pursue a career in turfgrass management, according to the release from Toro.

“I’ve never worked with NFL facilities, so I’m going to focus on raising my work to those standards,” Heitshusen said.

She also plans to take advantage of networking opportunities while attending the Super Bowl and to stay in touch with the turfgrass industry contacts she makes, she said.

An Iowa State University student has punched her ticket to the Super Bowl and will assist the grounds crew at the big game as part of Toro’s turfgrass training program.

“I was surprised and shocked when I first learned that I’d been selected for the program. I was instantly excited about the opportunity.  I was bouncing off the walls with excitement.”

Georgeanna Heitshusen, a junior in horticulture with an emphasis on turfgrass management