TV a top source of political information for caucus-goers, according to ISU/WHO-HD poll 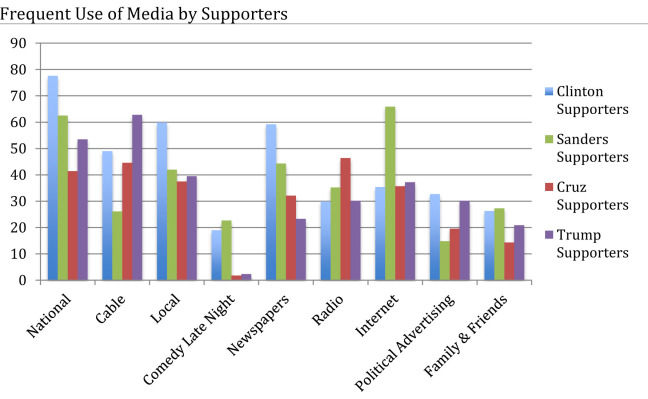 TV news is a primary source for political information, but this chart shows how media preferences vary by supporters of the top-polling candidates. Graphs provided by Kelly Winfrey

AMES, Iowa – Journalists from around the world will file countless reports from Iowa in the final days leading up to the caucuses. According to the latest Iowa State University/WHO-HD Iowa Caucus Poll, voters rely on a variety of these reports for political information with national television news being the primary source.

In addition to questions about candidate support, a team of Iowa State researchers asked likely caucus-goers where they get their political information. Out of 511 respondents, 61.9 percent said national TV news. Local television (49.1 percent) was the next top source, followed by cable television (45.9 percent), newspapers (42.8 percent), the Internet (41.5 percent) and radio (34.2 percent). About a quarter of those surveyed said they get information from campaign advertising.

“Almost half of our survey participants seem to rely on local news on a regular basis, and this is consistent for everyone regardless of party affiliation,” said Daniela Dimitrova, professor and director of graduate education in the Greenlee School of Journalism and Communication. “This finding is definitely good news for Iowa television stations as a whole. To me, it suggests that by and large local TV journalists are fulfilling the information needs of Iowa citizens and upholding high journalistic standards in the state.”

A breakdown by gender and age

Dianne Bystrom, director of the Carrie Chapman Catt Center for Women and Politics, says beyond the horse-race aspect of the presidential campaign in Iowa, they gained insight as to the preferred political information sources among different likely caucus-goers.

“It is interesting to look at what types of media sources are most important to Iowa voters, and we did find significant differences in how women, men, young people, older adults, Republicans, Democrats and Independents are accessing the various media to become politically informed,” Bystrom said.

Not surprisingly, the Internet is the main source of information for younger voters. Nearly 82 percent of respondents under 30 years old get their political information online. That’s compared to around 33 percent of caucus-goers over age 50. Raluca Cozma, associate professor of journalism, says media need to take a different approach with millennials who tend to be disillusioned with politics and less likely to vote.

“A way for media to engage them and encourage youth turnout would be to cover political issues relevant to their generation on online platforms. TV stations in Iowa have already created web teams to engage and update audiences on social media and local websites,” Cozma said. “Media should also keep in mind that millennials are the most diverse generational cohort in the United States, so news offerings should strive to cover a diversity of topics that could affect younger voters. They should avoid formulaic horse-race framing of political campaigns, which only increases cynicism.”

Interestingly, the poll found more voters under 30 (31.8 percent) also read the newspaper for political news as compared to voters in the 30-to-50 age group (21.8 percent). Voters over 50 years old (49 percent) are the most avid readers of print media for political information.

As for gender differences, more women turn to national networks (women 65.5 percent, men 58.3 percent) and local TV news (women 53.7 percent, men 44.5 percent) for their political information – whereas men (39 percent) are more likely to get their news from radio compared to women (29.4 percent). The analysis found no significant difference between Internet, newspapers or campaign ads as political information sources for women and men.

The primary source of political information for supporters of the top polling candidates is also telling. Among Hillary Clinton supporters, 77.6 percent get their news often or very often from national network news, followed by local news (59.9 percent) and newspapers (59.2 percent). However, 65.9 percent of Bernie Sanders supporters rely on the Internet. National news (62.5 percent) and newspapers (44.3) were the other two top sources for Sanders supporters.

Kelly Winfrey, assistant professor of journalism, says the data offers some insight about preferred sources of political news as well as the type of information voters are getting leading up to the caucuses.

“For example, newspapers tend to give more in-depth coverage of candidates and issues, so those who frequently get information from newspapers likely have more in-depth knowledge,” Winfrey said. “The fact that Clinton supporters are getting their information from the widest variety of sources likely indicates they are more well-informed than those that are getting their news in only one or two places.”

On the Republican side, radio (46.4 percent) was the top source of information for supporters of Ted Cruz. Donald Trump supporters relied more on cable news (62.8 percent).

The fact that Sanders has a younger group of supporters explains why they – more than the Clinton, Cruz and Trump supporters – get significantly more of their news from the Internet, Winfrey said. Cable news networks are the go-to for Trump supporters, more so than Cruz and Democratic supporters.

About the Iowa Caucus Poll

The new ISU/WHO-HD poll was conducted by Iowa State’s Center for Survey Statistics and Methodology along with WHO-HD, the NBC affiliate in Des Moines, through phone interviews with 511 registered voters Jan. 5-22. The margin of error is approximately 3.5 percent for the full set of respondents. The results are based on data from respondents who say they will attend, probably attend or unsure if they will attend the Iowa caucuses. For the sources of political news variables, the options “very often” and “often” were combined.

Faculty in the Department of Political Science, the Department of Statistics, and the Greenlee School of Journalism and Communication collaborated on the Iowa Caucus Poll. Those departments, plus ISU’s Office of the Vice President for Research, the College of Liberal Arts and Sciences and the Carrie Chapman Catt Center for Women and Politics, as well as WHO-HD, funded the research. 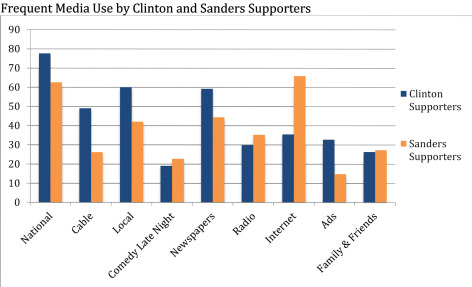 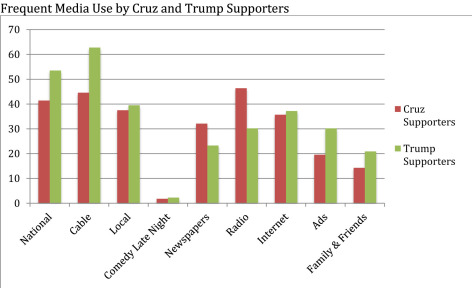