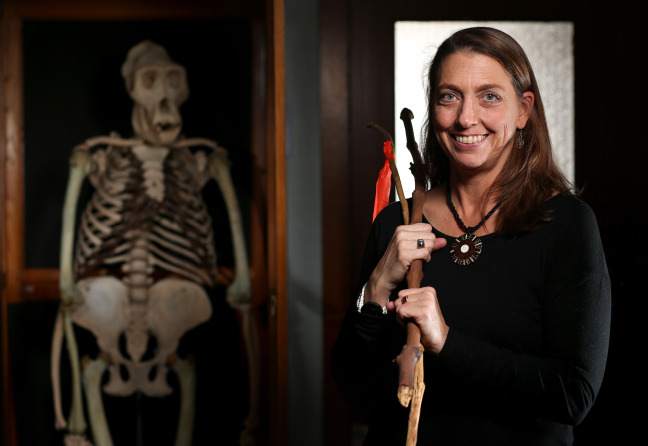 AMES, Iowa – Jill Pruetz doesn’t consider herself a thrill seeker or adrenaline junkie, but admits she gets a rush every time she ventures out into the Senegal savanna to study her chimps. The unknown of what she might encounter or observe is all part of the thrill.

“There’s something so great about being out in a wild place. I relish the fact that there are big predators out there. That to me puts a person in perspective,” Pruetz said. “For me it’s just part of a challenging environment. It makes me feel alive. It’s exciting.”

To describe her Fongoli research site as a challenging environment may be a bit of an understatement. Pruetz spends weeks to months at a time there “camping” (as she describes it) in the hot, arid climate. Luxuries such as air conditioning or running water don’t exist. She must pull water from a well and use a long-drop bathroom and bucket shower. And some of her closest neighbors are predators, both large and small, that can attack if provoked or deliver a deadly bite.

It’s an environment few would or could tolerate. But for Pruetz, an Iowa State University professor of anthropology, this wild kingdom is her laboratory, a place to be among the chimps that she studies and knows so well.

“You really get sucked into the life of the chimps. You get attached and involved with what’s going on with them,” Pruetz said. “And there’s always something going on with the group. It’s like a little soap opera, as any primatologist will tell you.”

There’s a different dynamic to working with animals in the wild, as opposed to chimps living in captivity. Pruetz and her team maintain a strict hands-off protocol and keep about 30 feet between them and the chimps they’re observing. But even at a distance, there’s still a connection. Pruetz has names for all the chimps and knows their individual personalities. It took years to build this relationship, but what she’s gained has made the investment of time and hard work all worth it.

Spears chimps use to hunt

Pruetz had a lot of questions when a research assistant first reported seeing a chimpanzee using a handmade spear to hunt. It’s not that she didn’t believe him, but based on the research at the time, hunting with tools was something chimps simply didn’t do. After a separate observation of a chimp pulling a bush baby from a tree hollow, Pruetz realized this may be something more than a one-time behavior. Then she saw it all with her own eyes.

That was back in 2007, about a year or two after she had successfully habituated the chimps. Pruetz was the first primatologist to record chimps systematically hunting with spears – a behavior unique to chimps in West Africa and a discovery that changed what researchers know about primates. Today, it’s not unusual for her to observe dozens of hunts during each trip to Senegal, but it never gets old.

“To me, it’s still fascinating,” Pruetz said. “I get excited every time I seem them hunting.”

Pruetz is well-known for her research on hunting as well as other firsts. She documented chimps taking shelter in the caves of the Fongoli savanna, a behavior previously unobserved. But what is often left out of the research papers and accolades of her notable achievements are the stories of illness, threats from dangerous animals, long hours spent in oppressive heat and primitive living conditions, that Pruetz endures all in the pursuit to better understand our closest living relative.

“It’s not all fun and games, it’s very difficult,” she said.

There’s a small vial tucked among the many treasures Pruetz collects in the field that now adorn her Curtiss Hall office on campus. The vial is not prominently displayed, but inside is a bot fly that serves as a reminder or more of a “badge of honor” for Pruetz – proof that she’s not one to shy away from a challenge.

The bot fly Pruetz had living in her arm.

The bot fly came from her arm. Pruetz suspects the fly’s eggs were transmitted through a mosquito bite and then hatched under her skin. A former professor told Pruetz to have the fly extracted; it would be too painful to do nothing. But Pruetz, not afraid of a little pain, left it there for 41 days before squeezing it out of her arm.

“It was super disgusting because it was wriggling as it came out. I popped it into a vial and it took forever to die, it was horrible. I didn’t know it was that big,” Pruetz said.

Bot flies seem relatively minor when compared to the threat of black mambas and cobras. But Pruetz says her greatest concern is malaria, a disease she gets almost every year, with the exception of this past year when she got tick fever instead. Even diseases virtually unheard of here in the U.S., such as yaws (a flesh-eating bacterium) and leprosy, are a risk in Senegal.

Destined to be in the field

Pruetz is very matter-of-fact when talking about the dangers and risks. There’s no drama – for Pruetz this is simply the reality of working out in the wild. It’s a career she was likely destined to pursue even as a child, when she would spend hours outdoors and cry when she had to go home from summer camp.

A trip to Belize for a field study of Mayan archaeology as an undergraduate sealed the deal. From that moment on, Pruetz knew she belonged out in the field. And after volunteering at a primate facility following graduation, she confirmed her passion to study chimps.

That passion is just as strong today as it was 15 years ago when Pruetz first started her research site in Senegal. The decision to go at it alone – instead of teaming up with a primatologist at an established research site – was its own challenge, especially as a woman. But Pruetz was determined to work independently, despite the cultural differences and funding challenges. Pruetz still clearly remembers the rejection she faced.

“I literally had one grant reviewer say, ‘What makes you think you can do this when nobody else has?’ Well, that for me was just a challenge,” Pruetz said. “I knew I could do it, I just knew it would take time.”

Eventually, others started to believe in what Pruetz was trying to accomplish. With the support of Iowa State, National Geographic and Primate Conservation Inc., Pruetz started habituating the chimps. It was a process that took four to five years and came with no guarantee the chimps would accept Pruetz as part of their group.

The hard work and risk paid off. Pruetz credits Iowa State for its financial support, but more importantly for the flexibility to balance teaching and extended research time in Senegal. Pruetz and her team are now documenting how young chimps learn to hunt. They’re also interested in understanding the behavior of the bush babies that the chimps hunt, and why the chimps only hunt around rainfall. With each trip, there’s the potential to learn more about the chimps’ hunting behaviors or discover something entirely new, and that for Pruetz is what’s so exciting. 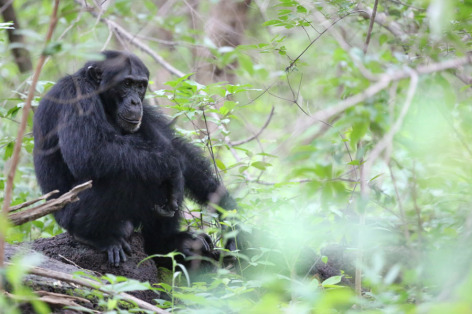 Jill Pruetz is very matter-of-fact when talking about the dangers and risks of studying chimps in the Senegal savanna. There’s no drama – for Pruetz this is simply the reality of working out in the wild.