AMES, Iowa -- Mary Robinson, who was the first woman president of Ireland, will speak about global justice and climate change at Iowa State University. Robinson is the United Nations special envoy for climate change.

Her presentation, "Redefining Global Security," will be at 8 p.m. Monday, March 7, in the Great Hall of the Memorial Union. It is part of Iowa State's Women's Leadership Series and World Affairs Series. It is free and open to the public.

In addition to her position with the U.N., she is president of the Mary Robinson Foundation-Climate Justice, which provides leadership, education and advocacy to secure global justice for those most vulnerable to the impacts of climate change — the poor, the disempowered and the marginalized. The foundation focuses on achieving sustainable, people-centered development and raising awareness of the need to respond to injustices inherent in a climate-affected world.

Robinson was president of Ireland from 1990 to 1997. She was U.N. high commissioner for human rights (1997 to 2002), founder and president of Realizing Rights: The Ethical Globalization Initiative (2002-2010), and introduced the human rights agenda into the core of U.N. activities. Robinson served as the U.N. Secretary-General special envoy to the Great Lakes Region of Africa from March 2013 until her appointment as special envoy for climate change in July 2014.

Throughout her career as a law professor, legislator, barrister and senior counselor, Robinson applied law as an instrument for social change. Her memoir, "Everybody Matters: My Life Giving Voice," chronicles her career as a young lawyer crusading for women’s rights. She continues to serve as a member of the Elders, an independent group of world leaders focused on peace and human rights and founded by Nelson Mandela. She  has received numerous honors and awards throughout the world, including the Presidential Medal of Freedom from President Obama.

Robinson's presentation is co-sponsored by the Carrie Chapman Catt Center for Women and Politics; the colleges of Agriculture and Life Sciences, Business, Design, Engineering, Human Sciences, Liberal Arts and Sciences, and Veterinary Medicine; the departments of Geological and Atmospheric Sciences, Sociology, and World Languages and Cultures; Green Umbrella; International Studies Program; Office of Sustainability; Office of the Vice President for Research; University Library; Women's and Gender Studies; Women's Leadership Consortium; World Affairs Committee; and the Committee on Lectures, which is funded by Student Government. 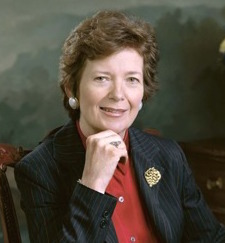