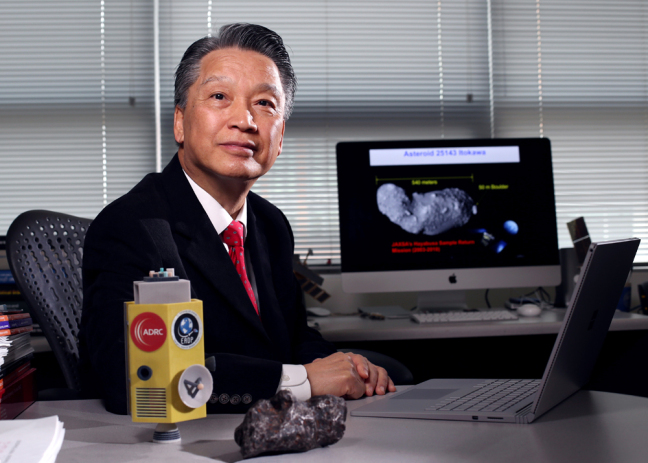 If his ideas become reality and spacecraft carrying nuclear explosives fly into asteroids one day, “The asteroid can be pulverized – not just fragmented – into dust!” he said, his hands going wild.

For Wie, a 64-year-old professor and Iowa State University’s Vance D. Coffman Endowed Faculty Chair in aerospace engineering, asteroid deflection – aka saving the planet – is all about the engineering.

Visit his office and there on his desk is a new textbook he’s written, “Space Vehicle Guidance, Control and Astrodynamics,” published by the American Institute of Aeronautics and Astronautics. There are also two patent plaques on his office wall for his work to develop devices called control moment gyroscopes that help control the International Space Station.

Wie has a doctorate from Stanford University and has published some 190 technical papers and 70 peer-reviewed journal articles. He’s won NASA grants to develop his asteroid deflection ideas. He presents those ideas around the world, most recently at February’s Space Flight Mechanics Meeting in California.

When Wie came to Iowa State nine years ago, he wanted to move his research career beyond his established expertise in spacecraft dynamics and control.

“I was looking for a big idea,” he said. “I picked asteroid deflection as a new focus.”

And so he founded the Asteroid Deflection Research Center at Iowa State. Early support came from his Coffman Endowed Faculty Chair and the Iowa Space Grant Consortium. In 2011, he won a $100,000 Phase I grant from the NASA Innovative Advanced Concepts Program. In 2012, NASA awarded him a $500,000 Phase II grant.

The result of those grants is a concept he calls the Hypervelocity Asteroid Intercept Vehicle. The idea is to launch a two-part spacecraft at an asteroid. Just before impact, the spacecraft separates, allowing the lead vehicle to hit the asteroid and create a shallow crater. The trailing vehicle enters the crater and detonates a nuclear explosive device, destroying the asteroid.

Not everybody supports launching a nuclear explosive device into space, and so last year Wie and his graduate students developed a non-nuclear way to destroy asteroids smaller than 150 meters in diameter. It’s called the Multiple Kinetic-Energy Impactor Vehicle. The concept calls for launching a vehicle carrying several impactors at an asteroid. When the carrier nears the asteroid, it releases the impactors so they spread like a shotgun blast. They slam into the asteroid at speeds of about 6 miles per second, creating shock waves strong enough to reduce the target to a cloud of dust.

“These are not just ideas and concepts,” Wie said. “These are detailed engineering and computational studies.”

Wie is quick to acknowledge that some people don’t take asteroid deflection or disruption very seriously. But he’s very serious about the engineering and technical challenges involved.

And that’s the thing about Wie and his research group – they’re focused on the practical, said Brent Barbee, an aerospace engineer at NASA’s Goddard Space Flight Center in Greenbelt, Maryland.

Barbee works on several projects related to asteroids and other near-Earth objects for NASA, teaches graduate courses in aerospace engineering at the University of Maryland and has co-authored several research papers with Wie. They first met at a planetary defense workshop in 2006.

“One of the things I remember most clearly about meeting him is how intent he was (and is, to this day) on developing practical engineering solutions to the problem of protecting the Earth against near-Earth object impacts,” Barbee wrote in an email. “That has been one of his guiding principles over the years, and I believe it has served him and his efforts well.”

“It was exciting to see a research center dedicated to planetary defense against hazardous near-Earth objects, especially considering that the threat posed to Earth by near-Earth objects was still not taken completely seriously by the various relevant technical communities,” Barbee wrote. “Through the efforts of several key groups, including the Asteroid Deflection Research Center, planetary defense has since become a well-respected field of research and development, and it continues to grow.”

It was early in a discussion about his asteroid research when Wie mentioned – and did a little bragging – about two of his doctoral students in aerospace engineering.

If all goes well, that internship could turn into a full-time NASA job.

And what’s it like working with Wie? How did that prepare him for NASA work?

“Like with any boss, you have to perform well for Dr. Wie,” Lyzhoft said. “He likes his results. And so you do what you have to do to get the necessary results. He’s a great mentor, and he always helped out.”

The second doctoral student, Ben Zimmerman, will graduate this spring and start a computer security job in Boston. He’s been doing the high-performance computing and simulation work for the asteroid deflection center.

He said working with Wie has “been an awesome experience.”

That experience has included writing 100,000 lines of simulation code from scratch, building a high-power computer system based on graphics processing units and presenting research papers across the country and even in Europe.

“Probably the biggest lesson that Dr. Wie taught me is that no matter how big or complicated the problem is and how many things you have to work out, you can do it,” Zimmerman said.

It took some reading, thinking and working, “But in the end, I got it all together.”

Wie is unfailingly enthusiastic about his asteroid deflection studies. He’s convinced his nuclear and non-nuclear concepts are technically sound. But there’s a $20 million challenge ahead: designing, building and flight-testing a prototype asteroid interceptor.

A private effort by the Emergency Asteroid Defence Project based in Denmark is working to find investors willing to test and develop a sustainable, for-profit asteroid defense system.

NASA has launched its own Asteroid Initiative, including an Asteroid Grand Challenge that’s designed to build a broad coalition for detecting, tracking and deflecting threatening asteroids. The initiative also includes an Asteroid Redirect Mission that aims to send a robot to an asteroid, collect a multi-ton boulder and send that into orbit around the moon where it can be explored and studied. NASA and several Department of Energy national labs are also studying planetary defense, including Wie’s concept of a nuclear blast destroying a threatening asteroid.

As he looks back on the progress he and the Asteroid Deflection Research Center have made— plus the asteroid efforts at NASA and beyond – Wie thinks his big idea for asteroid disruption could be a reality one day.

“Yes, I’m optimistic,” he said. “NASA is starting to evaluate these asteroid defense ideas and our proposed concepts. So it’s serious. Now is the time to build something like this.”

Iowa State's Bong Wie came to campus nine years ago hoping to pursue a new and big idea in aerospace engineering. He picked asteroid defense -- aka saving the planet -- and founded the Asteroid Deflection Research Center. Now, the concepts developed by Wie and the center are being evaluated by a group of researchers from NASA and three national laboratories.

Jill Pruetz gets a rush every time she ventures out into the Senegal savanna to study chimps.