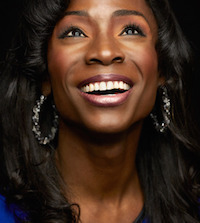 AMES, Iowa -- A leader in the movement for transgender and racial equality will speak at Iowa State University.

Angelica Ross will present "We are Worthy: Empowering Transgender Lives" at 8 p.m. Monday, April 11, in the Memorial Union Sun Room. She also will discuss "Trans Entrepreneurship and Creating Trans–Inclusive Workplaces" at 2:15 p.m. in 2019 Morrill Hall. Both presentations are free and open to the public.

Ross is a leading figure of success and strength in the movement for trans and racial equality. Named "First Foot Soldier of the Year" in 2015 by political commentator Melissa Harris Perry, Ross is the founder of TransTech Social Enterprises, a company that empowers trans and gender-nonconforming people through on-the-job training in leadership and workplace skills. She has toured nationally, speaking with business leaders, educators and President Barack Obama.

Since studying theater at Florida Atlantic University, Ross has been featured in film, television and theatre. She is the star of the new series "Her Story," which explores the lives and loves of two transwomen in Los Angeles.

Ross' talk is co-sponsored by the College of Design; the College of Human Sciences Diversity, Equity and Inclusion Committee; Lesbian, Gay, Bisexual, Transgender Student Services; Program for Women in Science and Engineering; Queer* Graduate Student Association; and the Committee on Lectures, which is funded by Student Government.