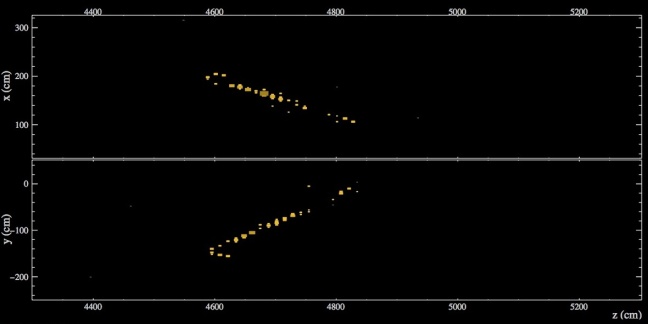 This is the telltale track of an electron neutrino in the NOvA Neutrino Experiment's Far Detector. Larger image. Image courtesy of the NOvA collaboration.

AMES, Iowa – Mayly Sanchez clicked to a presentation slide showing the telltale track of an electron neutrino racing through the 14,000-ton Far Detector of the NOvA Neutrino Experiment.

Since that detector started full operations in November 2014, two analyses of data from the long-distance experiment have made the first experimental observations of muon neutrinos changing to electron neutrinos. One analysis found 11 such transitions. And, Sanchez wrote on her slide, “All 11 of them are absolutely gorgeous.”

Taken together, the papers offer insights into fundamental neutrino properties such as mass, the way neutrinos change, or oscillate, from one type to another and whether neutrinos are a key to the dominance of matter in the universe.

Sanchez – an Iowa State associate professor of physics and astronomy who is also an Intensity Frontier Fellow at the U.S. Department of Energy’s Fermilab near Chicago – is one of the leaders of the NOvA experiment. She serves on the experiment’s executive committee and co-leads the analysis of electron neutrino appearance in the Far Detector.

Sanchez said the flickering electron neutrino tracks she helped analyze prove the experiment can do what it was designed to do. That’s spotting and measuring neutrinos after they make the 500-mile, 3-millisecond journey from Fermilab to the Far Detector in northern Minnesota. (That detector is huge – 344,000 plastic cells within a structure 200 feet long, 50 feet high and 50 feet wide, making it the world’s largest freestanding plastic structure.)

If the calibrations and parameters had been just a little off, “We might not have seen anything,” she said. “When you design an experiment like this, you hope that nature is kind to you and allows you to do a measurement.”

In this case, physicists are detecting and measuring mysterious and lightweight neutrinos. They’re subatomic particles that are among the most abundant in the universe but almost never interact with matter. They’re created in nature by the sun, by collapsing stars and by cosmic rays interacting with the atmosphere. They’re also created by nuclear reactors and particle accelerators.

There are three types of neutrinos – electron, muon and tau. As they travel at almost the speed of light, they oscillate from one type to another. Takaaki Kajita of Japan and Arthur B. McDonald of Canada won the 2015 Nobel Prize in Physics for their contributions to the independent, experimental discoveries of neutrino oscillation.

The NOvA experiment has three main physics goals: make the first observations of muon neutrinos changing to electron neutrinos, determine the tiny masses of the three neutrino types and look for clues that help explain how matter came to dominate antimatter in the universe.

But the universe still exists. So something happened to throw off that balance and create a universe full of matter. Could it be that neutrinos decayed asymmetrically and tipped the scales toward matter?

The NOvA experiment, as it takes more and more neutrino data, could provide some answers.

Sanchez likes the data she’s seen: “These are absolutely stunning electron neutrino events. We’ve looked at them and they’re textbook perfect – all 11 of them so far.” 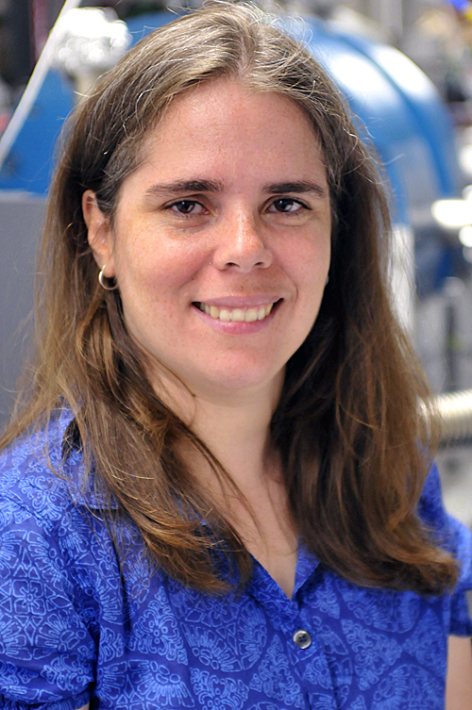 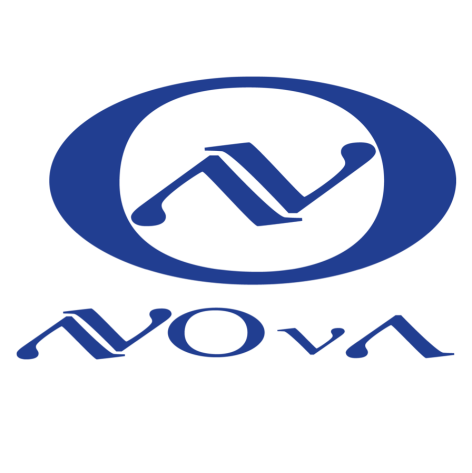 Iowa State physicists are part of the huge NOvA Neutrino Experiment. The experiment just published two papers about the first experimental observations of muon neutrinos changing to electron neutrinos. The discovery could offer insight into fundamental neutrino properties such as mass and could help explain the dominance of matter in the universe.

“These are absolutely stunning electron neutrino events. We’ve looked at them and they’re textbook perfect – all 11 of them so far.”

Xin, in fact, is preparing to defend his doctoral thesis about his work on the NOvA studies.