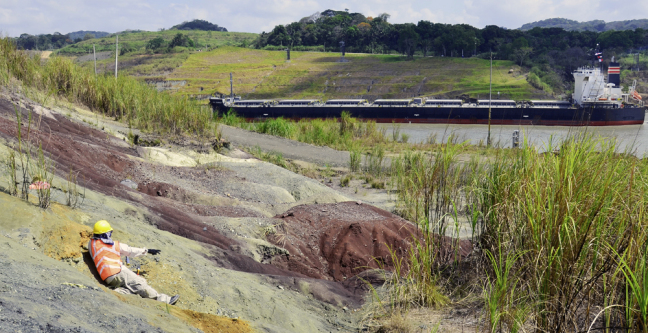 A student digs for fossils in the rock exposed by expansion of the Panama Canal. This is where paleontologists found North America's oldest monkey fossil. Larger photo. Contributed photo by Jason Head.

AMES, Iowa – It was late in the year, but Panama was still muggy and rain clouds were closing in. A field crew of student-paleontologists wasn’t having much luck, but Aaron Wood kept chipping away at the exposed rock with a flathead screwdriver.

And then he found a tiny, black-colored fossil tooth.

“It’s a good day if you find a complete fossil tooth – even if you already have 100 of them from the same species back at the museum,” Wood said of the student field work he was supervising near the Panama Canal as a postdoctoral research associate for the Florida Museum of Natural History back in 2012. “It’s an amazing day, though, when you find an entirely new species.”

Wood, who has directed Iowa State’s Carl F. Vondra Geology Field Station since 2015, said workers expanding the canal cut back forest and exposed rock to researchers. In that part of the world, vegetation quickly covers any exposed rock and evidence of Panama’s ancient past.

And so it was a once-in-a-century opportunity for a project led by Bruce MacFadden, distinguished professor and curator of vertebrate paleontology at the Florida Museum on the campus of the University of Florida.

When Wood uncovered that first tooth, he knew it was something unusual. But what? His initial thoughts went to the usual suspects: fossil mammals from North America. The 21-million-year-old rocks of the dig site formed when Panama was the southern tip of North America, separated from South America by a narrow sea. All of the fossil mammals previously found in the rocks were similar to those found in Texas, Florida and Mexico.

Jonathan Bloch, curator of vertebrate paleontology at the Florida Museum and lead author of the paper describing the fossil discovery in the journal Nature, was the first to suspect otherwise.

“After a week or so of trying to identify these teeth, Jon made what seemed at the time a somewhat crazy and exciting suggestion,” Wood said. “Could this tooth be from an extinct South American monkey?”

Turns out it was the latter: The first North American fossil monkey and the oldest fossil evidence of mammals traveling from South America to North America. Prior to the discovery, the oldest evidence of mammals making the trip north was the movement of certain sloths about 9 million years ago. The Isthmus of Panama formed about 3.5 million years ago, creating a land bridge for animals to freely move north and south.

The National Science Foundation, the Smithsonian Tropical Research Institute and the Florida Museum of Natural History supported the research project that produced the fossil discovery.

In all, Wood and the student crews collected seven of the monkey teeth from the ancient rocks of the Panama Canal. Researchers say the fossils are most similar to the squirrel monkeys found across Central and South America today.

Researchers named the animal Panamacebus transitus, denoting the discovery in Panama and a family of Western Hemisphere monkeys that includes squirrel monkeys. The name also highlights the 100-mile ocean crossing the monkeys made from South America to North America.

Once the monkeys arrived in present-day Panama, probably floating on rafts of vegetation, there’s no evidence they moved much farther north.

“What this tells us is that physical barriers, like oceans, can be overcome when talking about animals crossing from one continent to another,” Wood said. “But these monkeys didn’t go very far north once they arrived in Panama. Something else must have acted as a barrier.”

The fossil record of plants indicates ancient Panama was covered by forests similar to those in South America, Wood said. The forests could provide the monkeys the tropical fruit and habitats they preferred. Farther north, the forests featured North American vegetation and different foods for the monkeys.

So yes, Wood said, it was a big find – not only for science, but for the field crew.

“It boosts everybody’s morale when we find something at a dig site,” he said. “On that particular day, other people weren’t having much luck. But then we found something unusual – we just didn’t know how unusual it was.” 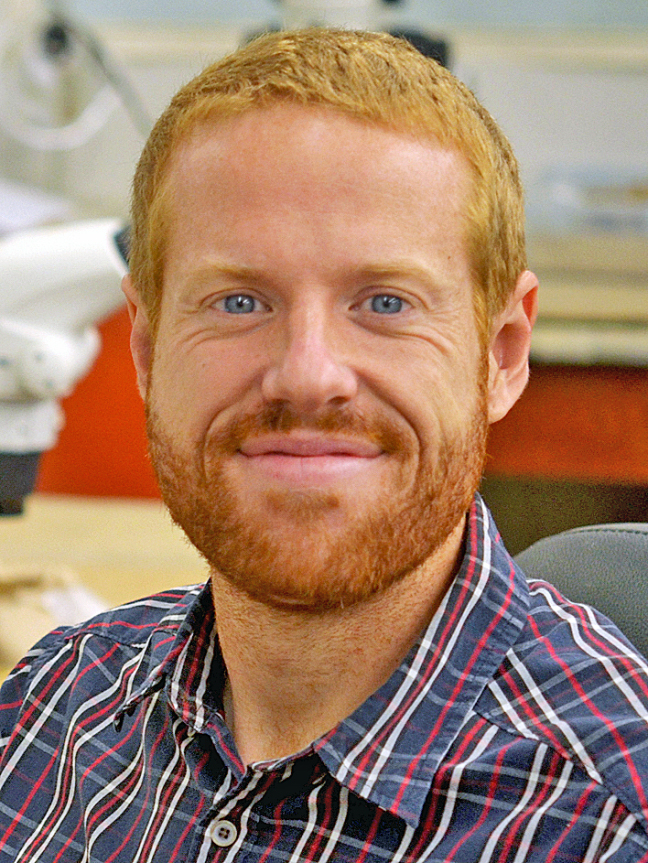 Aaron Wood, director of Iowa State's Carl F. Vondra Geology Field Station, found a tiny, black-colored fossil tooth in 2012 when he was a postdoctoral research associate for the Florida Museum of Natural History. It turns out that find was North America's oldest monkey fossil. The journal Nature just published a paper describing the discovery. 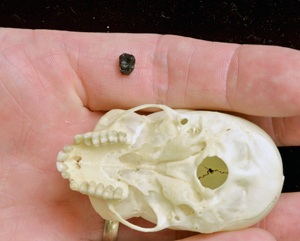 Aaron Wood holds one of the fossil teeth next to the skull of a squirrel monkey.

“It’s a good day if you find a complete fossil tooth – even if you already have 100 of them from the same species back at the museum. It’s an amazing day, though, when you find an entirely new species.”