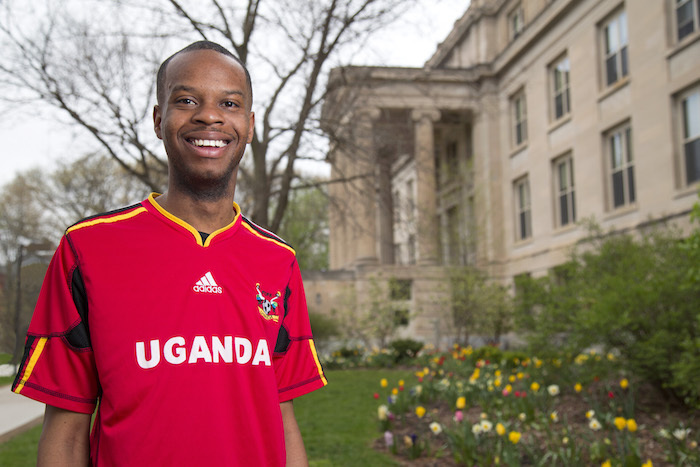 For example, Smith chose to attend an agricultural sciences high school without knowing anything about ag. He left his hometown of 2.7 million diverse people to go to college in a town of 60,000 less diverse people. He went on a service learning internship in Uganda after his freshman year and took graduate-level courses at a German university his sophomore year. And, while abroad, he preferred experiencing the country beyond the safe cocoon of Americans.

On Saturday, May 7, Smith steps out of his college comfort zone, graduating from Iowa State University with a double major in global resource systems and public service and administration in agriculture.

When Smith arrived in Ames from Chicago in 2011, he felt a different vibe.

“Everything closed so early. I was used to places being open 24 hours,” he said.

And Ames does not have Chicago's diversity. Even so, Smith quickly made friends during his freshman year in the Towers Residence Hall. He said that he encountered people who weren't accustomed "to being around a diverse group of people and others who just saw me as Malcolm.”

“It depends on the individual. I have friends now who grew up in very small towns like Elkhart, Waverly and Huxley. They didn’t experience a lot of diversity growing up, but they have respect for people,” he said.

“When I meet people who aren’t well informed, I see it as an opportunity to educate them about something they don’t know," Smith said. "And if I don’t know something about their lives, I’d appreciate learning about it.”

Most likely, Smith is tuned in to life’s teachable moments because both of his parents are educators. His mother teaches preschool and his father directs the Laboratory School at Truman College in Chicago. Even his older brother is an assistant teacher in the city.

But Smith wanted to do something different. And the urban son of teachers couldn’t fall much farther from the proverbial tree than in a field of corn.

As an eighth grader, Smith attended a citywide fair for high schools. He submitted his name for the Chicago High School of Agricultural Sciences “on a whim.” Like most Chicago kids, Smith didn’t know a thing about agriculture — he hadn’t so much as gardened — but he liked science and thought agriculture sounded interesting. The unique magnet high school, which is located in the south side neighborhood of Mount Greenwood, teaches urban youth about agriculture and includes a 40-acre working farm.

“Going to high school there was a fun experience. We grew crops like corn and pumpkins, and had horses, sheep and pigs. Everyone was part of Future Farmers of America and attended meetings,” he said.

Despite the fact that the University of Illinois had an extension office at the school, Smith and “a good number of his classmates” chose to attend Iowa State.

Keep calm and carry on

He's won scholarships, photo contests, a research poster competition, and an essay competition. That one got him a seat at the table at the USDA Agricultural Outlook Forum in Washington, D.C. — with Secretary of Agriculture Tom Vilsack.

Nothing seems to faze Smith. Not even presenting research summaries to the United Nations Food and Agriculture Organization staff in Rome ... or interviewing 130 Ugandans about economic and gender inequality ... or representing the ISU student experience on a promotional cover wrap for Forbes magazine.

"My dad always told me, 'If you mess up, keep going because it's only temporary,'" Smith said. "He tells me never get too nervous. We all make mistakes. Just go forward." 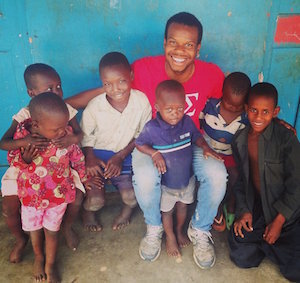 So, what has been Smith's most awesome, most meaningful experience at Iowa State? His two Uganda summer internships completed in conjunction with the College of Agriculture and Life Sciences’ Sustainable Rural Livelihoods Program.

During his first trip as a service-learning intern, Smith worked alongside Ugandan school children to plant vegetable, fruit and grain gardens. He helped set up an indigenous bee apiary. And he taught math to 5th and 6th graders. Two years later, he returned as a global intern, conducting an independent research project, analyzing the data, and leading a youth workshop on goal setting and entrepreneurship.

"It's been eye opening. You see starving people in Africa on TV. But actually seeing that first hand really impacted me," he said. "It put into perspective the benefits I have as an American citizen — benefits a lot of people would die to have."

The internships changed him. Beyond the not-sweating-the-small-stuff effect, Smith is trying to "better himself as a person, to grow and understand how lucky I am to be here ... how lucky I am getting a college degree and having these experiences."

Smith will be the first to tell you that his career goals are "all over the place." Eventually, he hopes to be in the USDA Foreign Agricultural Service, working in trade or directly with farmers in developing countries.

"It’s so important for Americans to teach our knowledge of ag practices to other nations," he said.

But first he needs to study for their exam while he works in an ag-related job in the U.S.

"I need to earn some money," Smith said with a chuckle. "Being in college for five years can make you completely broke."

Ultimately, Smith wants to go back to his urban roots, starting a business that converts vacant lots into vegetable gardens.

In the meantime, he continues to challenge himself.

"That's something Iowa State taught me — to keep pushing myself to go outside of my comfort zone. See how uncomfortable you get, and if you can adapt to it," he said.

"You never know what opportunities are out there."

Malcolm Smith knows that awesome things happen when he steps outside his comfort zone. For example, Smith chose to attend an agricultural sciences high school without knowing anything about ag. He left his hometown of 2.7 million diverse people to go to college in a town of 60,000 less diverse people. He went on a service learning internship in Uganda after his freshman year and took graduate-level courses at a German university his sophomore year. On Saturday, May 7, Smith graduates from Iowa State with a double major in global resource systems and public service and administration in agriculture. 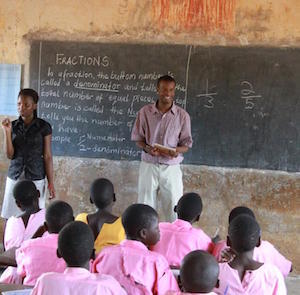 "That's something Iowa State taught me — to keep pushing myself to go outside of my comfort zone. See how uncomfortable you get, and if you can adapt to it. You never know what opportunities are out there."