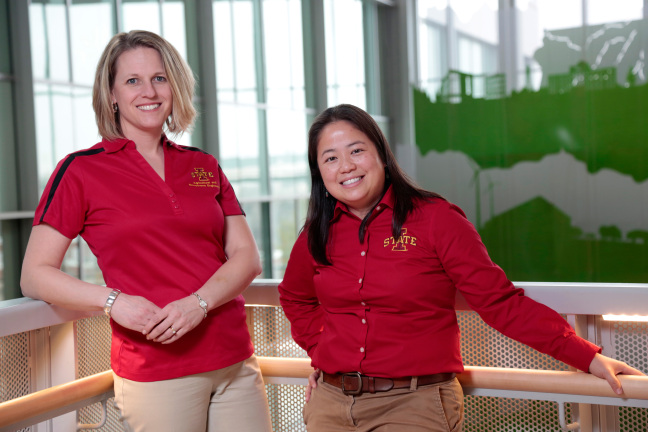 The three-year grant from the U.S. Department of Agriculture’s National Institute of Food and Agriculture will allow ISU researchers, along with personnel at USDA and Grinnell College, to advance the technological tools used to detect antimicrobial resistance and form strategies to slow its spread.

Antimicrobial resistance develops when harmful organisms such as viruses, bacteria and fungi no longer respond to medications used to combat them. Antimicrobial resistance poses a growing threat to the health of both humans and animals, said Adina Howe, an assistant professor of agricultural and biosystems engineering and the principal investigator on the grant.

“It’s a real global threat to public health,” Howe said. “Infections will persist and spread if the treatments we have stop working.”

The grant seeks to answer questions about how antimicrobial resistance enters the environment and the food chain through animal production systems. The research team will improve a new technology called DARTE-QM, which was designed by Howe to efficiently sequence the genes of microbes.

DARTE-QM builds on gene sequencing technologies and expands the scale on which they operate, Howe said. While previous technologies sequenced a single gene, DARTE-QM can target hundreds of genes simultaneously.

Howe said the team will gather manure, soil and water samples from swine operations and use DARTE-QM to sequence genes associated with resistance in the samples. The team will determine which genes may allow antimicrobial resistance to develop and persist in the environment. The researchers also will look at what production practices and environmental factors, such as drought or flooding, contribute to the propagation of resistant genes.

“We want to identify control points where we see reservoirs of resistance,” said Michelle Soupir, an associate professor of agricultural and biosystems engineering and a contributor to the project. “Once we do that, we can help figure out where mitigation efforts will work best. We’d like to be able to say where those critical control points are in three years, and we’d like to be able to say which organisms harbor the resistance genes.”

Antimicrobial resistance is a natural process that occurs as microbes exchange genes. Over time, genes that grant microbes resistance to medications such as antibiotics grow more prevalent, reducing the effectiveness of those medications.

Commonly used medications are losing their effectiveness faster than new treatments can be discovered and developed to replace them. That makes learning about how resistance develops even more urgent, Soupir said.

In addition to Howe and Soupir, the research team includes Heather Allen and Tom Moorman from USDA’s  Agricultural Research Service and Shannon Hinsa, an associate professor of biology at Grinnell College.

“It’s a real global threat to public health. Infections will persist and spread if the treatments we have stop working.”