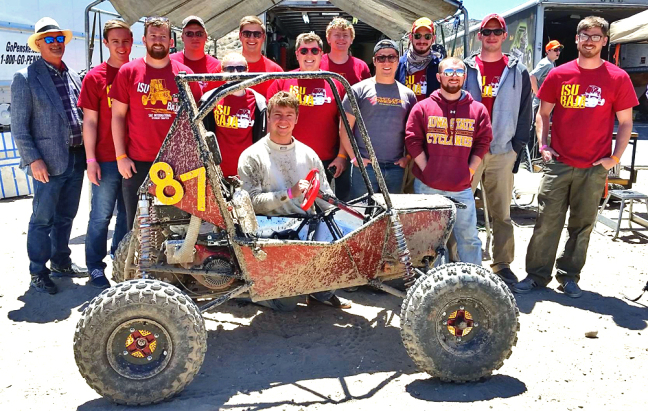 6-14-16 update: It was a record-breaking season for Iowa State’s Baja SAE Team. For the first time, the team recorded top-10 overall finishes in every event of the season. “We set a goal of top-five finishes and we came a little off that,” said Nathan Eick, the team’s technical director. “But we’re not disappointed whatsoever.” In two races, the team didn’t miss the top five by much: sixth at Tennessee Tech, then ninth at California and, just this past weekend, sixth at Rochester, New York. One of the team’s strengths at the Rochester competition was the consistent performance of its mini off-road racer. “We were strong in every event, but weren’t spectacular in any,” Eick said. Sure, there were accidents and breakdowns throughout the season, but Eick said this year’s new design was solid. It featured a lighter car and a good suspension. With a few improvements next year, Eick said there could be another strong season.

5-23-16 update: Their latest, all-important endurance race didn’t get off to a great start for the members of Iowa State’s Baja SAE off-road racing team. On the first lap of the race in Gorman, California, a car ran into the back of the Iowa State car, bending one of the rear shocks. Then, about 30 minutes later, Iowa State’s car was trying to make a pass on the outside of a corner to the right. The other driver swung out to take a wide turn and ran over Iowa State’s right, front shock. That broke a valve and drained the shock’s oil. That oil dampens and softens the suspension. “So the next three and a half hours of racing were just pretty darn rough,” said Nathan Eick, the team’s technical director and one of its drivers. Even so, the team finished the four-hour race in 16th place, good enough to earn ninth in the overall competition. “The endurance race propelled us to another top 10,” Eick said, “and that’s what we were after.”

AMES, Iowa – It’s hard to say whether there was more confidence or more data inside Iowa State’s Baja SAE garage earlier this week.

The team had already finished sixth overall at the Tennessee Tech round of the off-road racing season for student-designed and student-built mini-Baja machines. Next up is the round in Gorman, California, May 19-22. The season concludes with the round in Rochester, New York, June 9-12. The contests are sponsored by SAE International, formerly known as the Society of Automotive Engineers.

The Cyclone Racing team won the endurance race at Tennessee Tech by nearly 6 minutes. That’s a big deal because the four-hour race is worth 40 percent of a team’s total score. Win that race and a team can climb to the top of the overall standings.

“We won the race through consistency, we weren’t the fastest, and definitely not the slowest,” said Nathan Eick, a May graduate in mechanical engineering who’s from Tripoli and is the team’s technical director.

In other words, the car’s frame, suspension and drivetrain all held up to the bumps and jumps of a long off-road race. That’s a big source of team confidence.

And the source of team data is a little black box bolted just behind the driver. It collects information about speed, engine revolutions, brake pressure and other vital signs from sensors mounted around the vehicle.

Plug in a laptop, and the data shows up as jagged lines on a graph.

Team members recently ran the car through some tests, especially on hill climbs, a weakness at the Tennessee competition.

Eick said the new data helped the team tune the continuously variable transmission to get the most out of the 10 horsepower Briggs & Stratton engine that all teams have to use.

Zach Verbeck, a May graduate in mechanical engineering who’s from Cedar Falls and is a former team project director, likes what he’s seeing from the car.

“It’s just more efficient this year,” he said. “We’ve worked out some issues in all aspects of the car – the drivetrain, the suspension, even the seat.”

That special seat was designed by Jason Whited, a junior in mechanical engineering from Dallas Center. It’s not a solid piece that bolts to the frame. It’s heavy-duty fabric suspended from six points on the frame.

“It’s like a hammock that cradles the body,” Whited said. “It’s more comfortable for different-sized drivers.”

The team members in the garage – including Josh Adam, a May graduate in mechanical engineering who’s from Iowa City – also liked the new floating rotors that are better for brake alignment, the data acquisition during actual competition, adjustability built into the braking and transmission systems and a full budget of about $50,000.

So, once the team travels to the next two rounds of sales, cost, design, acceleration, maneuverability, sled-pull, suspension and endurance events, how will it go?

“We’re looking to win again,” Eick said. “We won two endurance races in 2014. We want to go back to back again and finish in the top 10 overall.”

Here's your chance to ride along during the fastest laps of the Tennessee Tech endurance race.

Iowa State's Baja SAE Team has already won a long race and earned a top-10 overall finish. The team's racing season still has stops in California and New York. To get ready, the student-engineers have been collecting data and fine-tuning their off-road racer.

“We won the race through consistency. We weren’t the fastest, and definitely not the slowest.”