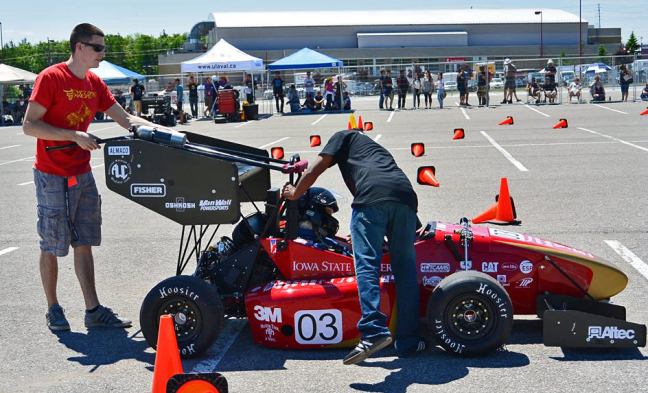 6-20-16 update: Iowa State’s Formula SAE Team faced plenty of engineering challenges this racing season: manufacturing mistakes, Plan B’s, blown parts, overheating and long nights thrashing away in the garage. But the student-engineers have something to show for all of that – a shiny, fifth-place overall trophy from the Formula SAE Lincoln event in Nebraska last week. The team has a third-place (among 17 scored teams) on its resume, but because Lincoln was so much bigger, featuring 70 scored teams, team members now consider it the team’s best finish ever. The highlight of Lincoln was a fifth-place finish in the twisty, half-mile autocross race, just 1.2 seconds off the leader. The team also finished sixth in the 14-mile endurance race. During the longer race, the team’s dynamic drag-reduction system, which flattens wings on the straights to reduce downforce and drag, actually helped the team battle a Nebraska heatwave. The flattened wings also allowed more air into the radiator, helping keep the engine cool and at full speed. Through the various challenges, “We stepped up and were able to get it done,” said Michael Hauptmann, the team’s technical director. “It was definitely stressful, but all the hard work paid off. We’re super proud of the work we were able to do this year.”

6-7-16 update: Members of Iowa State’s Formula SAE Team are back in their campus garage, thrashing away at the engine of their mini, open-wheel race car. The team is just back from the Formula North competition in Barrie, Ontario, Canada. There were some competition highlights, including a third-place finish in the cost report and a fifth-place finish in the one-kilometer autocross race. But, there were problems in the 22-kilometer endurance race. After 24 laps of racing, the car’s muffler and its valve cover gasket blew out. The team still managed to tie for 10th in the event, but it was a tough finish. “We’ve got some rebuilding to do,” said Michael Hauptmann, the team’s technical director. Overall, the team finished 13th of 25 teams. But there’s hope for better as the team prepares for the Formula SAE Lincoln June 15-18 in Nebraska. “We definitely have a quick car,” Hauptmann said. “A lot of the changes from the last car to this car were much more beneficial than we thought.” With some repairs and fine-tuning, he said, “the car is there.”

The machines are full of compromises: straight-line speed at the expense of cornering speed, trimming weight at the risk of parts failing, higher horsepower versus lower reliability. And then there are the myriad breakdowns, malfunctions and manufacturing problems that have to be solved, fixed or re-engineered.

Iowa State’s Formula SAE Team is working its way through plenty of those engineering lessons as it prepares its mini-formula car for this summer’s two-event season. The Cyclone Racing team competes at Formula North June 2-5 in Barrie, Ontario, Canada; and at the Formula SAE Lincoln June 15-18 in Nebraska. The Lincoln competition is sponsored by SAE International, formerly known as the Society of Automotive Engineers.

Michael Hauptmann, the team’s technical director and a May graduate in mechanical engineering from Vernon Hills, Illinois, said the team has put in a few all-nighters to prepare for the Canada competition.

The major problem was re-engineering the car’s front and rear wings after a manufacturing mistake put the original foam molds and carbon fiber wings under too much pressure during the curing process. That destroyed the parts and the team’s thought-out, integrated aero system.

Team members scrambled and came up with Plan B – using last year’s molds to quickly build some wings they could bolt to the car. The student-engineers also hustled to save part of this year’s design, a motorized pivot that flattens a rear wing flap, reducing downforce while increasing speed, fuel economy and even air to the cooling system. The system was a senior design project for Hauptmann and a group of classmates.

“I think this car has huge potential,” Hauptmann said. “Last year was our best finish in quite a while. And to have an opportunity to improve on that platform is huge for us.”

Last year, the team finished third in Canada but had a muffler failure in Nebraska that dropped the team to 28th.

Yes, there have been challenges this year. And the race car’s wings and aerodynamics won’t be exactly what the students designed.

But, McNicoll said, there should be more engine power and the paddle shifting is a big development for the team. 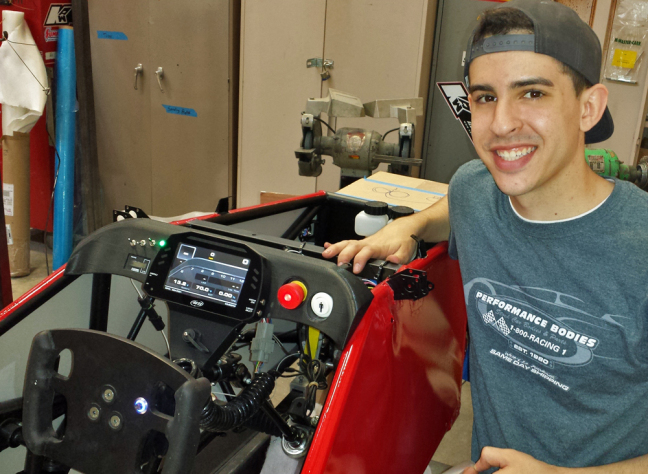 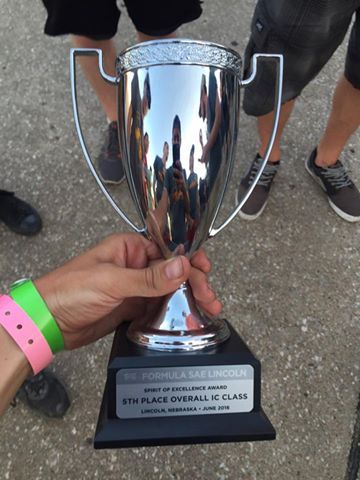 A manufacturing mistake forced the student-engineers of Iowa State's Formula SAE Team to re-engineer the aerodynamics package on this year's formula racing car. They'll put their Plan B to the test during two competitions this month. The car won't quite be what they originally designed, but they think it could still be a good racer.

“I think this car has huge potential. Last year was our best finish in quite a while. And to have an opportunity to improve on that platform is huge for us.”