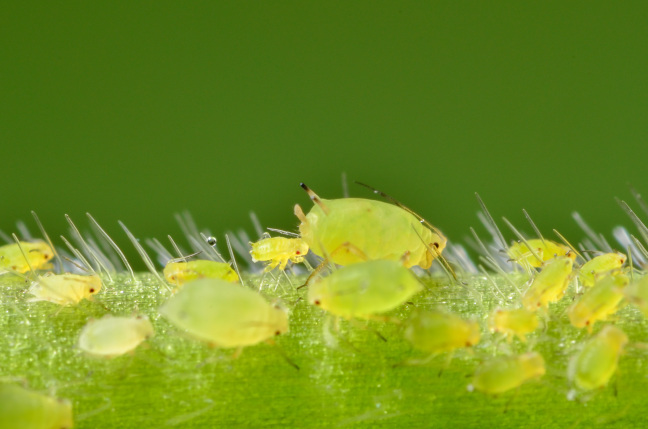 AMES, Iowa – Sometimes an entomologist has to fight fire with fire. Or bugs with bugs, as the case may be.

Iowa State University entomologists are studying the possibility of combating soybean aphids, one of the most damaging pests Iowa farmers battle, by introducing a species of stingless wasp that eats them. It’s similar to a tactic adopted recently near Fairfield, Iowa, where officials hope a different species of wasp will limit the spread of the emerald ash borer.

Matt Kaiser, a pre-doctoral associate in the ISU Department of Entomology, said controlling pest species by the introduction of other organisms is known as importation biological control, and scientists take great care to make sure the process doesn’t make a bad situation worse.

“If there’s a pest causing harm to humans or the environment, you can find other organisms that reduce that harm by suppressing the pest’s population. That’s what we refer to as biological control,” Kaiser said.

Aphids emerged as a serious threat to Iowa soybeans around 2000. The insects are native to Asia and most likely came to the United States as unintentional international travelers on plants brought into the country.  In the years since, aphids have caused soybean farmers major headaches by reducing yields by 40 percent during outbreaks and leading to a 130 percent increase in insecticide use in affected fields.

Kaiser is working with Matthew O’Neal, an associate professor in the ISU Department of Entomology, to study the viability of using Aphelinus glycinis, a species of tiny stingless wasps, to suppress aphids. Soybean farmers in Asia don’t experience the same difficulties with the pest, and Kaiser said that may be due to the presence of the parasitic wasps keeping the aphids in check.

Kaiser and O’Neal are members of a team of scientists supported by the U.S. Department of Agriculture leading the release of the wasp to an initial limited number of soybean fields located on ISU-affiliated research farms this summer. The team, which also includes USDA research entomologist Keith Hopper, will study any impact the wasps have on soybean aphids, and whether the wasps could be used in concert with soybean genetics to fight the aphids.  They’ll also study how the wasps respond to Iowa’s environment.

If the results are favorable, biological control may present Iowa farmers with a new means of reducing losses caused by soybean aphids at no or little cost.

A spectrum of options

State and federal officials plan to introduce a parasitic wasp species to woodlands near Fairfield to suppress the spread of the emerald ash borer, an invasive insect that has targeted ash trees in counties across Iowa. Kaiser said the wasps won’t save trees that have already fallen victim to ash borers, but the wasps may slow their spread and reduce their future impact.

Biological control played a major role in saving the citrus fruit industry in California in the late 1800s, when an insect called the cottony cushion scale decimated fruit trees in the state. In response, growers introduced the vedalia ladybird beetle, a predator of the pests in their native Australia, which eliminated the harmful infestation.

But scientists have to research species closely before introducing them to a new ecosystem to make sure the new organism won’t have negative impacts, Kaiser said. For instance, cane toads were introduced to Australia in the 1930s to suppress beetles that were feeding on sugar cane plants. Not only did the toads fail to rein in the beetles, they became an invasive species in their own right by expanding their population and causing ecological strain in their new environment.

Examples like that have prompted researchers to implement safeguards such as host-range testing, or determining the full breadth of an organism’s diet before introduction, to avoid unintended consequences. Researchers also keep imported organisms in quarantine labs for a period of time before they’re introduced to a new environment.

“We’ve learned that it makes sense to pay very close attention to what we’re moving around the world,” Kaiser said.

Iowa State University entomologists are studying the possibility of combating soybean aphids, one of the most damaging pests Iowa farmers battle, by introducing a species of stingless wasp that eats them. The harmless, stingless wasps may offer a form of biological control that could suppress soybean aphid populations.

“If there’s a pest causing harm to humans or the environment, you can find other organisms that reduce that harm by suppressing the pest’s population. That’s what we refer to as biological control.”