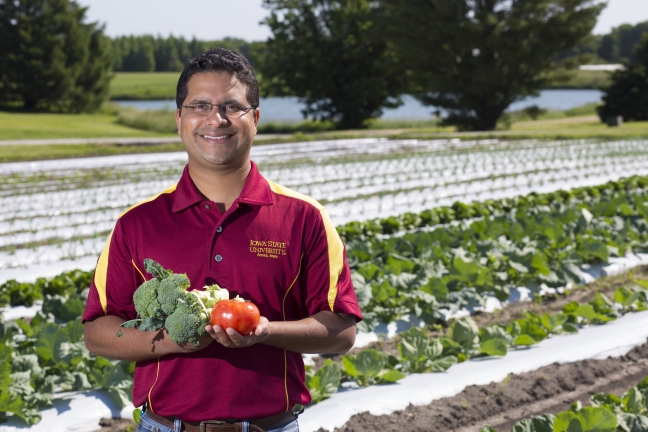 AMES, Iowa – It might be the secret for a better tomato.

Ajay Nair, an assistant professor of horticulture at Iowa State University, suspects there’s a way to graft the right tomato varieties together to create a plant hardy enough to withstand disease while also producing the tastiest, juiciest produce.

The feat would require grafting the right rootstock, or the part of the plant that remains underground, with the right scion, the aboveground part that produces the fruit. Nair is already conducting trials in search of the right combinations best suited to Iowa’s soil and climate.

“It would be the best of both worlds,” he said.

And in some important ways, Nair seeks to perform the same sort of graft for Iowa’s small-but-growing industry of fruit and vegetable growers. Iowa already boasts rich soil and a population that knows how to grow crops. But corn and soybean dominate the state’s agricultural landscape.

Nair, whose job requires him to spend most of his time on outreach efforts to help fruit and vegetable growers, is seeking ways to graft a wider appreciation for diversification and sustainability onto Iowa’s already strong agricultural roots.

If he’s successful, his efforts could pave the way toward a more prosperous and environmentally friendly agricultural outlook for Iowa.

It might just be the best of both worlds.

Research and reaching out

The outreach function of Nair’s job means a lot of time on the road visiting the operations of vegetable growers across the state.

But he also leads several research projects on a range of topics related to fruit and vegetable production in Iowa. Nair said his research interests usually draw on his experience from the outreach function of his job, prompting him to find science-based solutions to the questions he’s asked by growers.

In addition to the trials on grafting tomato hybrids, he’s also researching the use of “high tunnels,” an increasingly popular kind of greenhouse that helps growers to control the environments in which their plants grow.

Growers asked Nair about the utility of high tunnels, so he set out of find answers in his research.

“What I’ve found is that they’re a double-edged sword,” he said. “You get more warmth and wind protection in the spring, but may get excessive heat in the summer.”

And, because high tunnels require some investment to create, he recommends growers use them for produce that will create the highest possible return on the market. For instance, colored peppers might make more sense to grow in high tunnels than green peppers, which don’t fetch quite as much from customers. His current research will evaluate several colored pepper cultivars that can be grown inside a high tunnel. The project also will investigate the effect of different shade cloth material to regulate temperature and light inside high tunnels and how those factors would affect plant growth, yield and quality.

Nair also has looked closely at the ability of cover crops to strengthen soil health and reduce erosion. Cover crops such as cereal rye can withstand colder temperatures, making them good candidates for farmers to plant after the growing season. The rye will hold soil in place during the fall and winter, while land left bare will be much more susceptible to runoff, Nair said.

He’s also studying the benefits of strip tillage, or tillage that affects only small sections of land rather than an entire field. Nair said his research indicates that using strip tillage in concert with cover crops may enhance the environmental benefits.

Nair has collaborated with several colleagues in other disciplines such as agronomy, entomology, food science and human nutrition and plant pathology. He’s also worked with state agencies and private organizations such as the Iowa Fruit and Vegetable Growers Association and Practical Farmers of Iowa to develop a team that assists growers with their production issues and challenges.

“I’m glad that I get to work with excellent colleagues who share the same passion and commitment to helping fruit and vegetable growers,” Nair said. 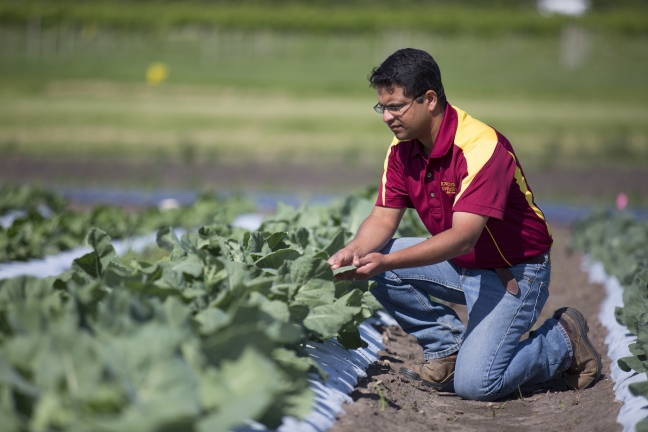 Nair kneels in front of a row of vegetables at the ISU Horticulture Research Station. Photo by Christopher Gannon. Larger image.

Nair earned a bachelor’s degree in agriculture from Kerala Agricultural University in India, where he studied a broad range of topics – everything from plant disease to fertility – for a range of crops. The program was comprehensive, but Nair decided he wanted to study topics in depth, leading him to pursue a master’s degree in plant propagation at the University of Maine.

He continued his education with a Ph.D. from Michigan State University, where he got his first experience with extension and outreach. Traveling the state and getting to know individual growers became one of his favorite parts of the program.

“Everywhere you travel in the state, there are people you know,” Nair said. “They become friends.”

So when a similar position opened up at Iowa State, he jumped at the opportunity, joining the ISU faculty in 2011. He carries on that tradition by engaging and exposing his graduate students to several on-farm trials, extension workshops and field days.

“It’s important to engage young researchers in extension and outreach because they’ll be the ones conducting innovative research and taking it to the growers of the future,” he said.

For a state with such a strong agricultural tradition, Iowans still import 80 percent of the fruit and vegetables they eat from outside the state’s borders. Nair said that fact presents an opportunity for Iowa growers to build their operations and generate local economic activity.

Of course, that comes with its own challenges. Growing and harvesting tomatoes or peas or squash doesn’t work quite the same way as growing and harvesting corn and soybeans. The work isn’t as automated, and growers require human labor to grow their produce and bring it to market. And labor imposes costs on the grower and can be difficult to find.

But Nair said he sees signs that the industry is growing in Iowa. He said at least two or three students in his vegetable production course each of the last three years have gone on to start a new vegetable farm in the state.

“The local food movement is gaining strength,” he said. “People are realizing more and more the value of food, of buying fresh and buying local. They want to know what’s in their food and how it was produced.”