AMES, Iowa – Iowa State University veterinarians are refining a method of collecting diagnostic samples from swine that both pigs and producers are happy about – and all it requires is a little rope.

“The pigs aren’t happy about collecting blood samples, and neither are the people,” Zimmerman said.

He and some of his ISU colleagues began their experiments to find an easier means of collecting samples by hanging ropes in pens of pigs.  The pigs enthusiastically chewed on the rope, leaving an oral fluid sample in the process.

The researchers began the project in 2005 as part of their work on porcine reproductive and respiratory syndrome virus, one of the costliest diseases U.S. pork producers battle.  Zimmerman said pigs instinctively chew on objects - including ropes hanging in their pen - as a means of exploring their surroundings.  But the researchers didn’t know if the oral fluid samples left on the rope would allow them to track the infections they were interested in monitoring.  As they refined the process, they learned that oral fluid samples can lead to diagnostic accuracy as good as - and usually better than - conventional surveillance techniques.

Zimmerman said oral fluid samples collected with rope can help veterinarians detect a wide variety of infections, including foot and mouth disease and classical swine fever.  The technique is gaining wide acceptance among veterinarians and producers.  The Iowa State University Veterinary Diagnostic Laboratory ran 10,268 oral fluid tests in 2010, but by 2015, that total jumped to 176,167.  Producers in Europe, the Americas and Asia have also begun to collect oral fluid samples.

Zimmerman said testing oral samples saves producers money and avoids the difficulty of taking individual blood samples from pigs.  He estimated the cost of testing for PRRS is between 3 to 12 cents per pig in the barn, depending on the kind of test used. By contrast, the cost of a PRRS virus outbreak in growing pigs can cost between $7 and $15 per pig.

The researchers have tested cotton, nylon and hemp ropes and found that cotton produces the best testing results. Growing pigs four weeks or older require no training for oral fluid collection, Zimmerman said. The rope proves irresistible to them due to their natural curiosity. For younger pigs, Zimmerman suggested that a rope be left on the floor of their pen for 30 minutes to allow the piglets to grow accustomed to it in a nonthreatening way before trying to collect samples. 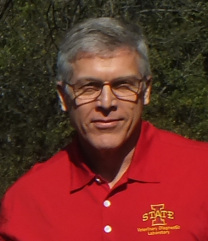 “The pigs aren’t happy about collecting blood samples, and neither are the people.”