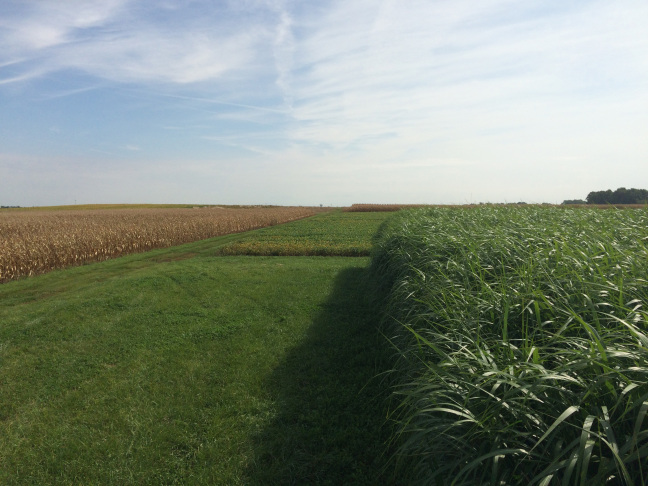 Perennial grasses, like those shown here, could reduce nitrogen runoff if planted on farms in the Corn Belt, according to a new ISU study. Photo by Mauricio Tejera. Larger image.

AMES, Iowa – A new study from an Iowa State University agronomist shows that an increase in perennial bioenergy grasses throughout the Corn Belt would lead to a significant reduction in nitrogen moving down the Mississippi River and into the Gulf of Mexico.

The study used computer models to simulate how various levels of perennial grasses might affect the level of nutrient runoff from Midwestern farmland. The study’s findings largely corroborate those of the Iowa Nutrient Reduction Strategy, a state plan designed to reduce nitrogen and phosphorus levels that contribute to the Gulf of Mexico’s hypoxic zone, said Andy VanLoocke, an assistant professor of agronomy and co-author of the study.

“This study adds to the portfolio of evidence that perennials can be a major part of the solution to nutrient runoff,” VanLoocke said. “This is a process that we’ll continue to refine, but it adds to the conversation.”

Nutrient runoff from the Mississippi River has contributed to a hypoxic zone in the Gulf of Mexico, or an area of water with low levels of dissolved oxygen. The low oxygen levels in the gulf “dead zone” make poor habitat for aquatic organisms, prompting scientists to look for ways to reduce nutrient runoff upstream.

VanLoocke’s study, published in the peer-reviewed academic journal Global Change Biology Bioenergy, found that perennials could reduce nitrogen runoff by more than 70 percent on farmland where they’re planted, a figure that closely mirrors the conclusions of the Nutrient Reduction Strategy.

The Iowa Nutrient Reduction Strategy identified the planting of perennial crops, or plants that grow back year after year, among several strategies with the potential to significantly reduce nitrogen runoff. ISU researchers have pointed to plants such as miscanthus and switchgrass as promising perennial options.

In an independent analysis, VanLoocke’s study used computer models to account for climate and soils data across the Midwest, as well as historical maps of where corn and soybeans have been planted. The study analyzed different thresholds of crop replacement of current farmland between 5 percent and 40 percent. The study also examined different levels of fertilizer use for perennial grasses, since researchers are still experimenting with how best to fertilize perennials.

VanLoocke said perennial crops tend to start growing earlier in the spring than corn and soybeans. That longer growing season means they soak up more nitrogen, which keeps the nutrients from washing downstream, he said.

He said the study’s simulations can’t account for every variable in every field, but he said he and his co-author will continue to refine the models and improve their usefulness.

“The new research shows that a perennial market would have positive effects on water quality,” VanLoocke said. “With this model in place, we’ll be able to play with more scenarios and land-use practices. Our goal is to give as much information as possible about what’s possible with the landscape.”

Computer-generated models show perennial plants such as switchgrass could reduce nitrogen runoff from farm fields into the Gulf of Mexico. The ISU agronomist who led the study said perennials could be an important tool in combatting the Gulf of Mexico’s hypoxic zone.

“This study adds to the portfolio of evidence that perennials can be a major part of the solution to nutrient runoff. This is a process that we’ll continue to refine, but it adds to the conversation.”