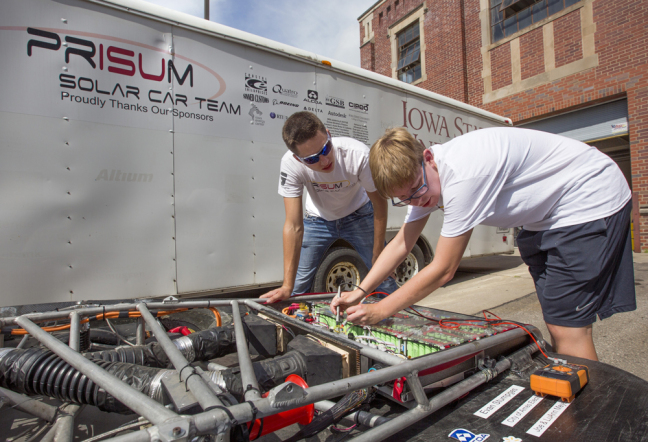 That’s developing a reliable car for a run at the 2017 World Solar Challenge – a race across Australia’s outback.

But first there’s America’s cross-country solar car race. And it won’t be a cruise in the park for Team PrISUm.

“I hope with all the upgrades we’ve made to the car that we’ll do well,” said Goode, a senior in materials science and engineering who’s from Coggon. “But you never know – there’s a lot of competition and some people will be gunning for us after last year.”

Last year, during the Formula Sun Grand Prix at the Circuit of the Americas Formula 1 race track in Austin, Texas, the team drove to its first overall victory. The team and its car, Phaëton, dominated the three days of grand prix racing, completing 31 more laps than the second-place team and scoring the fastest lap of the race by about 14 seconds. (The team named the car after the Greek sun god’s son who, according to mythology, begged to drive the sun chariot.)

Now the team is getting set to race an updated version of that car, “Phaëton 2,” at two races this summer. First is a qualifying race around the track at Pittsburgh International Race Complex, July 26-28. Then it’s the American Solar Challenge road race, July 30-Aug. 6.

The road race marks the 100th anniversary of the National Park Service by travelling from Cuyahoga Valley National Park in Brecksville, Ohio, to Wind Cave National Park in Hot Springs, South Dakota. Race checkpoints and stage stops will be at national battlefields, monuments and historical parks along the way. (The route takes the racers south across Missouri – it does not cross into Iowa.)

Team PrISUm’s student-engineers have made some major performance upgrades for this summer’s races:

All those improvements should mean good racing for Team PrISUm and Phaëton 2. And all those new systems should get a good race test before the team builds its next car – a four-door, four-seat hatchback. That next-generation solar car will be named “Penumbra” (the edge of shadow around an eclipse) and it will be a functional passenger car, not a single-seater built for racing. The team’s goal is to take it to the World Solar Challenge in October 2017 and drive 1,900 miles across Australia, from Darwin to Adelaide.

"Our whole philosophy for this summer,” Goode said, “is that we’re testing a lot of systems that we’ll use on the four-seat car.” 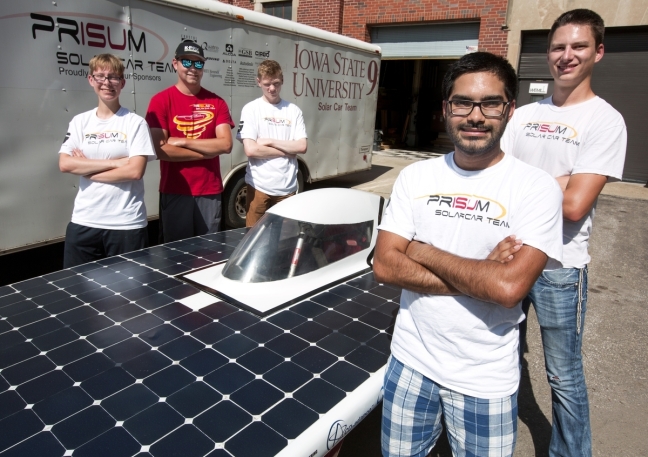 Iowa State's solar car team is getting ready to race a qualifying grand prix and then 1,800 miles across the middle of the country. While the team will certainly try to defend last year's first-ever overall title, there are other goals, too. The team has big ambitions to race across Australia during next year's World Solar Challenge. And so team members will use this year's races to test new systems for the car they'll design and build for the Australian race.

“I hope with all the upgrades we’ve made to the car that we’ll do well. But you never know – there’s a lot of competition and some people will be gunning for us after last year.”