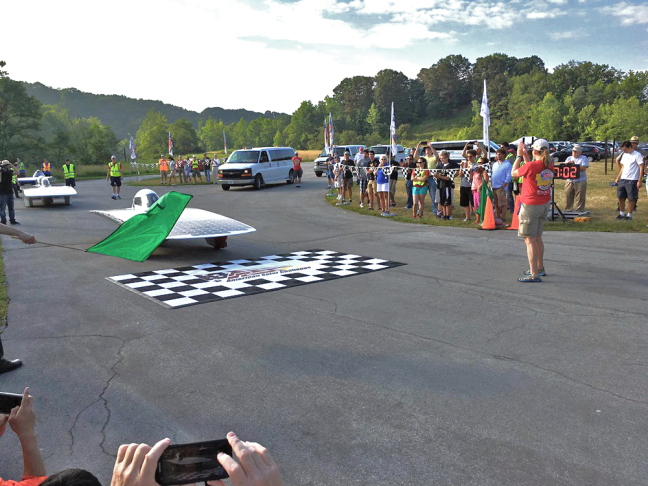 AMES, Iowa – It was supposed to be an easy, restful night for Team PrISUm before starting the American Solar Challenge, a cross-country race for student-designed and student-built solar racing cars.

But when the team plugged in its car, Phaëton 2, for one last, non-solar charging session, that charging system blew up.

It was too late to use the car’s solar array to get the battery pack to 100 percent. So what to do?

“It was very disheartening,” said Matt Goode, the team’s project director who’s a senior from Coggon and is majoring in materials science and engineering. “But there was no sense in moping all night. Let’s figure out how to fix this issue.”

And that’s what the student-engineers did. They remembered that turning the car’s motor can generate power. So they found an abandoned shopping center, hooked their solar car to the back of a university van and towed it around the parking lot from midnight to 6 a.m.

That was enough for an 85 percent charge. And that was plenty of power to take the race’s green flag and start the eight-day, 1,800-mile race from Ohio to South Dakota, marking the National Park Service centennial by hitting national parks and historic sites along the way. The team made it to the Dayton checkpoint in eighth place on Saturday.

Goode said the car was great: the solar array produced 1,000 watts, drivers could hit 45 mph, and the sun even came out for the whole afternoon.

“We’ve been able to scoot down the highway,” Goode said from Hamilton, Ohio, where the team camped for the night.

He’s expecting another good day of racing on Sunday when the team heads for George Rogers Clark National Historical Park in Vincennes, Indiana.

“We’ve got a pretty rock star group of individuals here,” Goode said. “There are a lot of freshmen and sophomores, and they really stepped up. That was great to see.”

The team also had to stay up all night to fix a voltage problem during the Formula Sun Grand Prix qualifying race.

And so everybody, he said, was happy another all-nighter wouldn’t be necessary.

After one all-nighter to fix a voltage problem, Team PrISUm pulled another one to solve a charging problem. But the team and its solar racing car made it to the green flag and had a good first day of racing at the American Solar Challenge. The team made it to the Dayton, Ohio, checkpoint in eighth place on Saturday.

“It was very disheartening. But there was no sense in moping all night. Let’s figure out how to fix this issue.”