Another up and down day for Team PrISUm, but Phaëton 2 does hit the speed limit 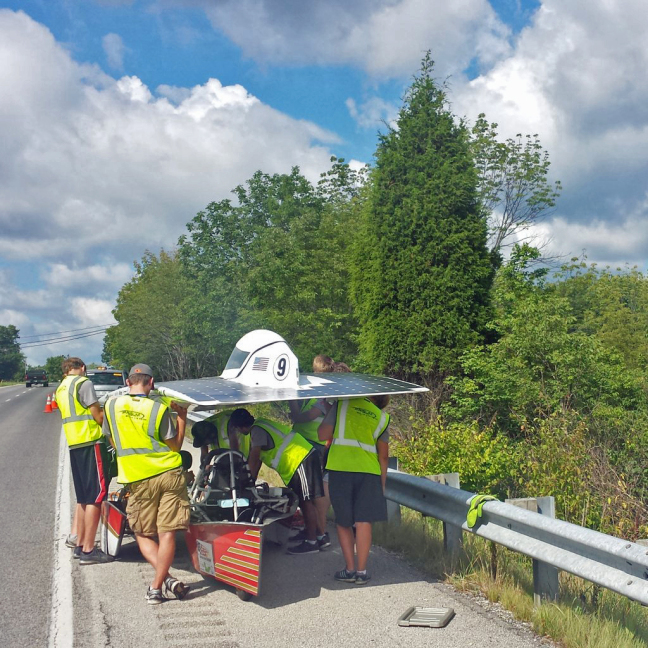 The student-engineers of Team PrISUm attempt a roadside electrical repair during the second day of the American Solar Challenge. Larger photo. Photo by Team PrISUm.

AMES, Iowa – Team PrISUm’s solar racing car was heading up an Indiana hill when the day’s great start came to a quick stop.

“An electrical relay was clicking and the next thing we knew the car was fully dead,” said Matt Goode, the team’s project director and a senior from Coggon who’s studying materials science and engineering.

Fully dead as in the car wouldn’t move. Wouldn’t power up. Wouldn’t get the team to the end of day two of the eight-day, 1,800-mile American Solar Challenge for student-designed and student-built solar cars.

The team’s student-engineers fired up their soldering equipment and tried a roadside repair. But that wasn’t working – and wasn’t particularly safe. So they rolled down the hill and parked at an Aurora, Indiana, fire station.

It took some two hours to make a fix and get the car’s power board back in business.

While they worked, team members watched other solar cars pass by.

And then there was more bad news. The trailer that follows the team, carries supplies and secures the race car overnight, came to a smoky stop. The axle bearings on one side went out. On a Sunday. When finding a shop to make axle repairs would be impossible. (The University of Michigan’s solar car team later saved the day by offering its second trailer to secure Phaëton 2 for the night.)

Things were getting so challenging for Team PrISUm, one of the team’s advisers – David Ringholz, chair and associate professor of industrial design – bought ice cream for the students.

But there was some good news: The repairs worked and Goode said the team “put the pedal to the carbon fiber panel” and charged back up that Indiana hill.

“We were cruising at 60 mph, the speed limit on most of the roads,” he said.

The team was able to pass one car and made it to the stage stop at George Rogers Clark National Historical Park in Vincennes, Indiana, ranked 12th of 13 cars.

Monday the car will race to a checkpoint at the Ulysses S. Grant National Historic Site in St. Louis. This year’s race is marking the centennial of the National Park Service by racing from Ohio to South Dakota and hitting national parks and historic sites along the way.

While it has been a roller coaster race for Team PrISUm, Goode said there’s plenty of racing ahead.

“We’re definitely not out of this,” he said. “We’ve got a game plan for tomorrow.”

And just in case that’s not enough: “We’re hoping the bad karma is behind us and we can get the good karma heading our way.”

“We’re definitely not out of this. We’ve got a game plan for tomorrow.”