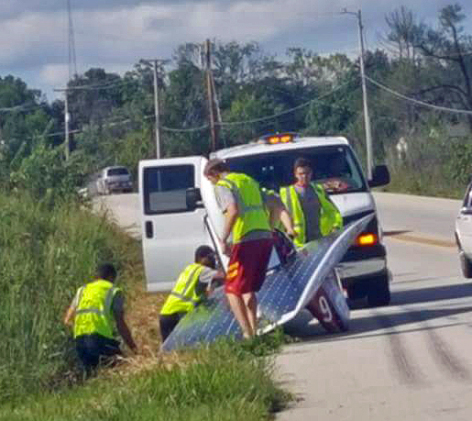 AMES, Iowa – It’s just not going to be easy for Team PrISUm this year.

Well, on Monday, the third day of this year’s American Solar Challenge, an eight-day, nearly 2,000-mile race for student-built solar cars, the answer was missing a checkpoint by seconds and dropping a wheel into a ditch.

But first, before we get to the trouble, the day did throw some good news the team’s way:

Goode said the team’s strategists had a rock-solid plan for the day. They controlled Phaëton 2’s speed and power consumption with an eye on arriving at the St. Louis checkpoint just before closing time. They passed some teams on the way and hit St. Louis in a pack of four solar cars: PrISUm, Polytechnique Montreal, Missouri S&T and California Berkeley.

“Those four teams were neck and neck and passing each other on a four-lane highway,” said Goode, a senior from Coggon who’s studying materials science and engineering. “It was something incredible to see. We were yelling in the team car. The energy was so high in the car.”

And remember how axle bearings on the team’s trailer failed on Sunday? Well, the team found a shop to make repairs and the trailer is now rolling along. Turns out that was a real race-saver when the team ended the day with some emergency repairs.

Then there was the day’s bad news:

Team PrISUm was the sixth car into the St. Louis checkpoint, but it pulled up to the line 41 seconds past closing time. That cost the team extra charging and a chance to extend the car’s range. Goode said the team was actually in the checkpoint park at the deadline, as required by regulations, and may appeal the late call.

Worse yet, with just 30 minutes of racing left in the day, the team pulled to the side of Missouri Route 21 to let cars pass. Part of the shoulder had eroded away and the car’s right front wheel dropped in, bending the axle and destroying the aerodynamic wheel covers.

But Goode said the team trailer carries enough spare parts to build three new suspension systems. So the axle was repaired in minutes and team members would work into the night to fix the wheel covers.

“This race crew is as strong as steel,” he said. “They’re incredible. We went in the ditch and within 30 minutes we could have been driving down the road. The group we have, they never give up.”

Tuesday’s goal for the team is a drama-free drive from just south of St. Louis to Wilson’s Creek National Battlefield in Republic, Missouri. It’s a stage stop, so times, penalties and standings will be recorded.

And what else could the day throw at the team?

This year's edition of the American Solar Challenge has been exactly that for the students of Team PrISUm. But -- even with a wheel in the ditch, an electrical breakdown, a trailer that won't roll and a charging system that failed -- the team has found solutions and kept on racing.

“This race crew is as strong as steel. They’re incredible. We went in the ditch and within 30 minutes we could have been driving down the road. The group we have, they never give up.”