Team PrISUm races nearly 300 miles on the day, runs out of charge 5 miles from stage stop 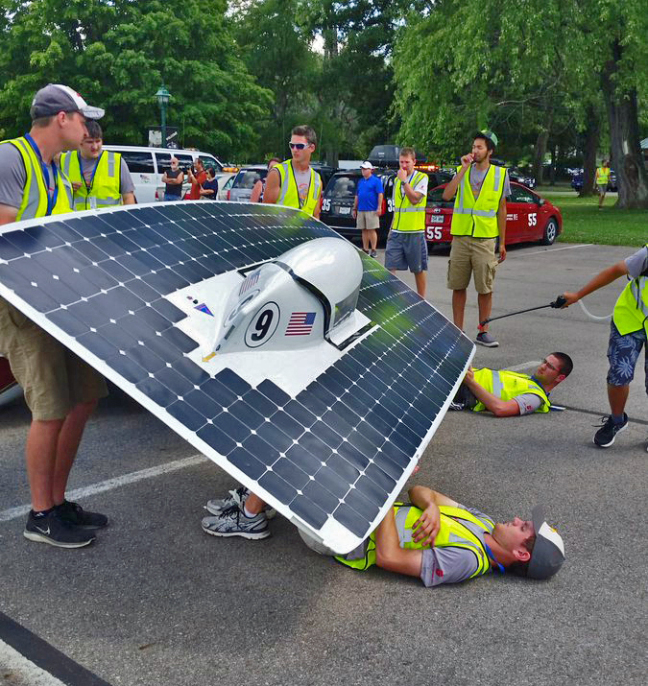 The students of Team PrISUm work to charge the battery pack of their solar racing car, Phaëton 2. Larger photo. Photo by Team PrISUm.

AMES, Iowa – Team PrISUm was 5 miles from a great day.

Iowa State’s solar car team started day four of the American Solar Challenge just south of St. Louis. The goal was the stage stop at Wilson’s Creek National Battlefield in in Republic, down near Springfield, nearly 300 miles away.

But the battery pack in the team’s car, Phaëton 2, was only at 20 percent when the day started. That’s what happens when you start the eight-day, nearly 2,000-mile race for student-built solar cars with a charging malfunction and later miss out on some bonus charging time, said Matt Goode, the team’s project director.

So the team spent the day obsessing over battery charge, power from the solar array, speed, weather and energy consumption. Team members were running through every calculation and strategy to get to the end of the race’s second stage on time and in good shape.

“But 5 miles out we ran out of juice,” said Goode, a senior from Coggon who’s studying materials science and engineering.

Team members ran the car as long as they possibly could – even when power was so low they could only hit 5 mph.

“We were really scraping the bottom of the cells,” Goode said. “We weren’t going to give up. You don’t give up.”

The battery pack was empty, though. So the team packed the car into a trailer and drove those last 5 miles to the stage stop. There will be a penalty for that, but it won’t be a big one.

Except for those last few miles, “It was a wonderful day,” Goode said. “There were no breakdowns whatsoever. We’re finally getting through our bad luck.”

Now the team’s focus is packing the battery pack with as much solar power as possible. On Wednesday, the race swings to the northwest for Kansas and Scotts Bluff National Monument in far western Nebraska. It’s the race’s longest stage with some 800 miles over the next three days.

This year’s race has had so many ups and so many downs, Goode said. “We’re definitely learning a lot.”

Team PrISUm ran through every calculation and strategy, but couldn't quite make the battery power last all the way to the second stage stop of this year's American Solar Challenge. So now the team's student-engineers will do all they can to pack their battery pack with sun power. They'll need it -- the race's longest stage starts on Wednesday.

“We were really scraping the bottom of the cells. We weren’t going to give up. You don’t give up.”

Team PrISUm placed 8th in stage two of the four-stage American Solar Challenge. The team is 9th in the overall standings, about 1.5 hours behind No. 8 École de technologie supérieure of Montréal.