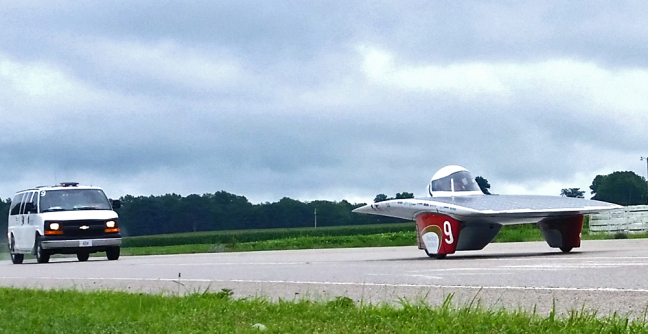 Team PrISUm is racing from Ohio to South Dakota during the American Solar Challenge. Larger photo. Photo by Team PrISUm.

AMES, Iowa – It was a marathon day for Team PrISUm drivers Jacob Heinberg and Arun Sondhi.

The two students split the driving duties over nine hours and 280 miles from Topeka, Kansas, to Grand Island, Nebraska.

That’s what happens during the best race days. No stops for repairs equals no stops for driver changes. So don’t drink all that water yet – it’s going to be a while until the next pit stop.

“It was a great day, nothing broke at all,” said Matt Goode, a senior from Coggon who’s studying materials science and engineering and is the team’s project director. “The morning was a little cloudy, but the sun burned that off and it was amazing charging weather.”

And so Team PrISUm cruised along on day six of the American Solar Challenge, an eight-day, nearly 2,000-mile race from Ohio to South Dakota for student-designed and student-built solar cars. To celebrate the centennial of the National Park Service, the race is stopping in national parks and historic sites along the way.

Team PrISUm was the eighth team to stop at the day’s checkpoint at the Homestead National Monument of America in Beatrice, Nebraska.

Next up is Scotts Bluff National Monument in far western Nebraska. That’s 330 miles for the team. It will take a sunshiny morning charging session to fill the battery packs and make that kind of trip possible.

But at this point in the race, when it’s clear Team PrISUm isn’t going to be the winner, the goal is now to test and perfect systems for the team’s next car – and its dream of racing in the October 2017 World Solar Challenge across Australia.

The student-engineers of Team PrISUm are no longer racing for a top finish in the American Solar Challenge. Now the race is all about testing components and systems for their next solar car -- and their dream of racing in the October 2017 World Solar Challenge across Australia.