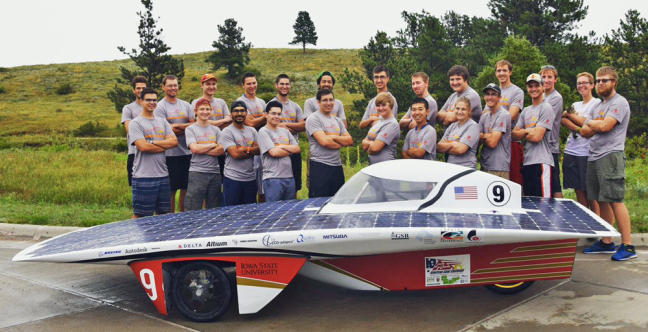 There were even a few rounds of “Da-da-da-daaa … Go Cyclones!”

That’s how Team PrISUm hit the finish line of this year’s American Solar Challenge on Saturday afternoon. It was a gray and rainy. It was yet another challenging day for solar cars.

Only three teams managed to drive the race’s final 160 miles under solar power. Team PrISUm made about 110 miles and then had to haul its car to Wind Cave National Park in Hot Springs, South Dakota, before making a short drive to the finish line.

“That actually says something about our team,” said Matt Goode, the team’s project director and a senior from Coggon who’s studying materials science and engineering. “We crawled at about 10 mph for over 30 miles. That really showed the persistence of the team we brought this year.

“We were the last team that was out there.”

When the students took the checkered flag, behind them was eight days of solar racing, 1,975 miles of road from Ohio to South Dakota, too many all-nighters, a few big problems solved and countless tweaks made to their car. There was also a little cruising at the speed limit.

The team had enough speed and resilience to finish seventh of the 13 cars that started the race. The team also won awards for overcoming adversity and for turning failed brake tests into data, statistics and a convincing argument that its car was safe to race.

Those awards meant a lot, Goode said. They represent a lot of hard work and dedication.

And so, despite the electrical, mechanical and sunshine challenges along the way, the race really was a great experience for Team PrISUm.

“We came here to win and we didn’t,” Goode said. “But what we got out of this was so much more. This was a young race team and we learned so much.

“It’s really awesome because we learned so much.”

Team members won’t waste any time putting all that knowledge into practice.

Goode said during the long drive back to campus on Sunday, “We’ll talk about how to build the next car.”

Team PrISUm finished an up-and-down American Solar Challenge in seventh place. Judges recognized the team for overcoming adversity and for making the best of a failed brake test. The team also won two big achievement awards. And, there were countless lessons learned on the long road from Ohio to South Dakota.

The team on the road