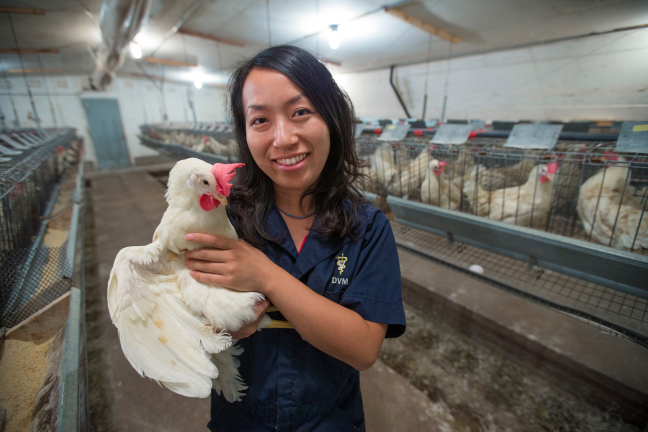 AMES, Iowa – Yuko Sato plunged headlong into the job market after graduating veterinary school. She applied for dozens of jobs, interviewing with potential employers every chance she got. But the Great Recession had chilled hiring across the economy, and Sato struggled to find anyone looking for a young dairy veterinarian.

At a hotel in Beaver Falls, Pennsylvania, where she’d just interviewed for yet another job, Sato faced a difficult choice. She could continue her job hunt or pursue a new residency program in poultry medicine at Purdue, where she’d earned her doctorate in veterinary medicine. But she lacked experience with poultry, so the residency represented a major course change.

Turns out, that’s part of what made it so tempting.

“I find new challenges really compelling, and I thought maybe I should try this,” she said.

As she has at many junctures in her life, Sato embraced the new challenge, leaving a job offer on the table to do so. That same pursuit of new challenges would lead her to Iowa State in 2015, where she became an extension poultry veterinarian just as an outbreak of avian influenza rocked Iowa’s poultry industries.

Just another new challenge to embrace.

From business to bovines

Sato grew up in Osaka, Japan, but attended Berry College in Rome, Georgia, after falling in love with the school’s campus while traveling with her father on a business trip. She intended to study business and eventually work with her father, who owns a private marketing company.

But her academic advisor, Dr. Martin Goldberg, who was also a veterinary professor, got her a job working in the college’s dairy barn, where she milked cows, mixed feed and administered vaccinations for a herd of over 30 cows. Agriculture quickly captured her interest, she said.

“My objective walking into college was to take over my dad’s business, but I found agriculture fascinating because it was so different from my upbringing in a city,” Sato said.

The experience in the dairy barn set her on the path to veterinary school at Purdue. She earned her DVM with plans to become a dairy vet, but decided to enroll in a new poultry residency at Purdue launched by Dr. Patricia Wakenell, a professor of avian diagnostics.

Sato said the prospect of Wakenell’s mentorship drew her to the program.

“She told me ‘if you’re willing to learn, I’m happy to teach you what you’ll need to know to succeed.’ But it was a risk because the program was so new and because I didn’t have any experience with poultry,” Sato said.

Sato took her current position at Iowa State in spring 2015 as an outbreak of avian influenza swept across numerous states and forced egg and poultry producers to depopulate their flocks.

The high-pressure circumstances forced her to make connections quickly and learn the state’s poultry landscape. She’s worked with industry leaders, government officials and others in academia to gather and communicate the latest research on avian influenza.

“My role is to find out how I can best serve the community,” she said. “Usually that means spreading the message of vigilance and biosecurity.”

She helps producers formulate flock plans to minimize their risk of another outbreak, keeping the particulars of individual operations in mind.

“There’s no cookie-cutter checklist that you can just hand out to everyone,” Sato said. “It has to be specialized to match that particular producer.”

The avian influenza crisis inspired more veterinary students to consider studying poultry, so Sato started a clinical ambulatory poultry rotation for fourth-year vet students. Working with Dr. Rob Porter at the University of Minnesota, students in the rotation travel to a number of poultry operations throughout the course.

Sato wasn’t sure how vet students would greet her poultry medicine course, which had been taught previously by her predecessor, but she was met with a surprise when she showed up to the conference room where students interested in the course were asked to sign up.

“I had students sitting in the hallway because so many wanted to take the course and the conference room was full,” she said.

Just another challenge to meet head-on.