Steve Forbes will talk about capitalism at Iowa State Sept. 12

AMES, Iowa -- Steve Forbes, chairman and editor-in-chief of Forbes Media and an internationally respected authority on economics and finance, will speak at Iowa State University.

He will present "How Capitalism Will Save Us" at 8 p.m. Monday, Sept. 12, in the Memorial Union Great Hall. His talk is free and open to the public.

Forbes will offer an analysis of the major issues driving the American economy, focusing on the presidential election. He will provide insights about how capitalism, free markets and a flat tax are essential to a healthy economy— a message he has delivered for decades as editor of one of the world's most successful business magazines.

Forbes was born into the publishing empire that has grown to reach a worldwide audience of more than 5 million readers. He writes editorials for each issue of Forbes magazine under the heading “Fact and Comment.” He is the author or coauthor of several books, including "Reviving America," "Freedom Manifesto," and "How Capitalism Will Save Us." Forbes is the only writer to win four Crystal Owl Awards, a prize given to the financial journalist whose economic forecasts proved most accurate.

In 1996 and 2000, Forbes campaigned for the Republican presidential nomination with a platform that included a flat tax, medical savings accounts and a new Social Security system for working Americans.

Forbes' talk is co-sponsored by the National Affairs Series, Young America's Foundation, ISU College Republicans and the Committee on Lectures, which is funded by Student Government. More information on ISU lectures is available online, or by calling 515-294-9935. 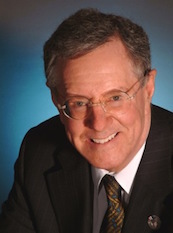 "How Capitalism Will Save Us"
Steve Forbes