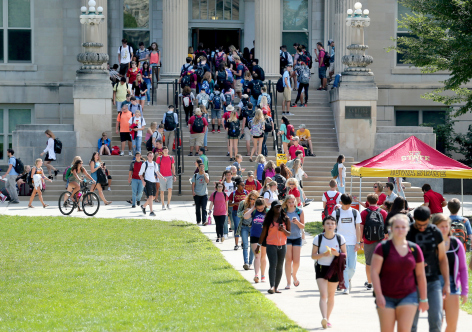 Students come and go on the steps of Curtiss Hall on the first day of the fall semester at Iowa State. Photo by Christopher Gannon.

“As we work to create a more diverse and inclusive campus, Iowa State is proud to remain the top choice for more Iowa students than any other school in the world, as well as record numbers of non-resident, U.S. multicultural and international students,” said Iowa State University President Steven Leath. “Now marking our eighth consecutive year of record enrollment, we are pleased to see more moderate growth this fall. True to our land-grant mission, Iowa State is accessible and affordable; but with lagging state funding, we want to be sure we are growing at a pace that allows us to maintain high quality.”

In the last decade, overall enrollment at Iowa State has grown by 11,198 students, or 44 percent. The student body represents every Iowa county, every U.S. state and 121* countries.

Overall, nearly 95 percent of Iowa State graduates are either employed or pursuing further education within six months of graduation.

Iowa State’s first-year, full-time student retention rate increased to 87.6 percent, well above the national average and just under ISU’s record of 87.7 percent set in fall 2011. The average ACT score for new freshmen also has increased the last three years, to 25.17 in fall 2016.

* Update: The number was initially reported as 125 countries; it is actually 121.