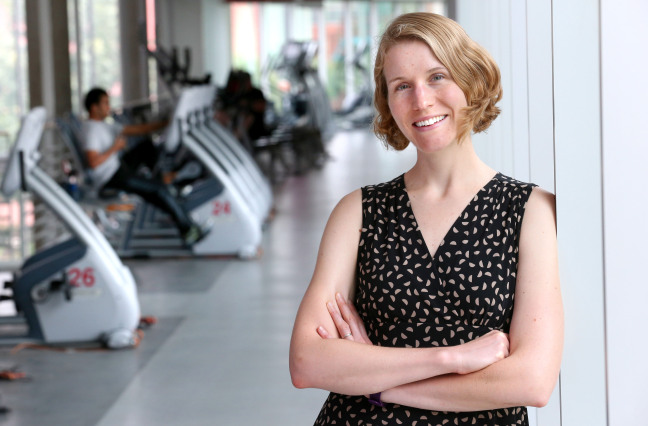 Alison Phillips says an intrinsic reward can help eliminate the deliberation over whether or not to exercise. (Larger image) Photo by Christopher Gannon

AMES, Iowa – The morning alarm is more than a signal that it’s time to get up – for many people it means it’s time to hit the gym. But if exercise is not a habit, that cue from the alarm may trigger a debate over whether to exercise or go back to sleep.

New research by Alison Phillips, an assistant professor of psychology at Iowa State University, finds that it takes more than a conditioned cue to stick with an exercise routine. Instead, it’s the combination of a cue, such as a morning alarm or the end of the workday, and an intrinsic reward that helps develop and maintain exercise as a habit. Phillips says if exercise is intrinsically rewarding – it’s enjoyable or reduces stress – people will respond automatically to their cue and not have to convince themselves to work out. Instead of feeling like a chore, they’ll want to exercise.

“If someone doesn’t like to exercise it’s always going to take convincing,” Phillips said. “People are more likely to stick with exercise if they don’t have to deliberate about whether or not to do it.”

Intrinsic reward is specific to each individual. Phillips says it could be physiological, such as from endorphins or serotonin, or from spending time with a friend while working out. It’s important to note that intrinsic reward takes time and experience to develop – not everyone loves exercising when they first start, Phillips said. Ultimately, the reward must make it so that you prefer exercising to not exercising in response to your cue. If you do not feel better or enjoy exercising, you’re going to do something else when forced to make a decision, Phillips said.

Exercise is a complex behavior that requires effort, which is why it’s not as easy to develop as other simple habits, such as brushing your teeth. And for that reason, Phillips says the reward must come directly from the activity. If you’re exercising to lose weight or for other extrinsic reasons, you’ll still have to make a decision when you encounter your cue.

Phillips and her colleagues conducted two separate studies to analyze activity levels for initiators or people just starting to work out, and maintainers or those who had been exercising regularly for at least three months. In the first study, participants reported the duration and intensity of exercise each week. Accelerometers were used in the second study to track activity.

The role of intrinsic motivation was different for each group. If initiators enjoyed exercising, they were more likely to continue, but it was still an intentional process, Phillips said. However, maintainers were at a point in which they may have developed a habit and the intrinsic reward helped maintain that habit in response to a cue. The results are published in the journal Sport, Exercise and Performance Psychology.

Phillips says the data support the role of intrinsic reward in maintaining exercise as a long-term habit. She stresses that exercising for external reasons, such as weight loss, are legitimate reasons to start and maintain exercising. But even if you achieve that reward, it’s not enough to make exercise an automatic behavior, Phillips said. If you don’t see the results you want or your external goals change, you’ll likely quit, which is why habit formation is essential to creating life-long change.

“If exercise is not habit, then it’s effortful and takes resources from other things you might also want to be doing. That’s why people give it up,” Phillips said.

Even with a cue and intrinsic reward from exercise, people may still throw in the towel. Phillips says an exercise habit may be relatively easy to maintain, but it takes commitment to keep that habit or form a new one when circumstances change, such as a new job or birth of a child.

Most people know the health benefits of exercise, but that knowledge alone is not enough to make it a habit. Phillips says a different approach is needed to help people develop exercise habit. For that to happen, each individual must identify their intrinsic reward and personally experience it. Phillips and other ISU researchers are developing an intervention, modeled after a diabetes prevention program, to guide people on what to look for and how to use appropriate cues for their exercise routine.

The intervention will likely combine personal coaching or training with group activities. Phillips says helping people identify that intrinsic reward may be the missing element to making exercise a habit. As with any habit, she knows it won’t happen overnight. But it’s worth the effort if more people can realize the benefits of exercise for maintaining health and preventing chronic illness.

“What we’re aiming for is lifestyle change and interventions to date have not achieved these long-term lifestyle changes,” Phillips said. “There are fairly simple strategies that have not yet been tried to help people develop exercise habits for life. Although the strategies may be easy, implementing and sticking to them may prove quite difficult. It may be a classic high-risk, high-reward endeavor.”

Anyone who has tried sticking to an exercise routine knows it isn't easy. But the combination of a conditioned cue and intrinsic reward may be the key to developing an exercise habit, according to a new Iowa State University study.

“If someone doesn’t like to exercise it’s always going to take convincing. People are more likely to stick with exercise if they don’t have to deliberate about whether or not to do it.”